Turn on suggestions
Auto-suggest helps you quickly narrow down your search results by suggesting possible matches as you type.
Showing results for
Show  only  | Search instead for
Did you mean:
Multiple per device RDS CALS are issued the same device issue…
By


Hello AskPerf! Ishu Sharma here again from Microsoft Performance team.  Today I will be discussing an issue where multiple per device Remote Desktop Services CALS are issued to the same device.
Before we dive into this topic, I would like to recall the below facts about RDS Per Device Licensing.

Clients store their license under the key:

HardwareID stores a Random 20-byte identifier specific to the client machine and is generated automatically by Windows. This ID uniquely identifies the machine to the license server. When a client is allocated an RDS CAL from the license server, this HardwareID is recorded in the licensing database to associate the client with the CAL. This entry is made when clients are allocated both temporary CALs and permanent licenses. 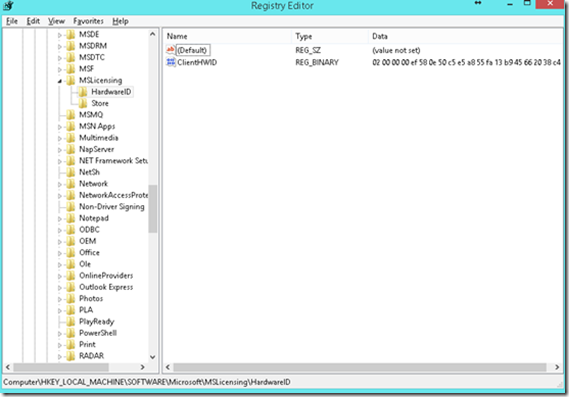 Store is used to store the terminal services CAL allocated from the license server.  Entries are contained in sub key named License00x, where X is a numerical ID beginning with 0.  Each License00x entry contains a separate CAL.

Ideally each Client device should be issued only one RDS CAL. However, there would be times where License Server Manager will show multiple per device CALS being issues to the same device as shown in the below picture: 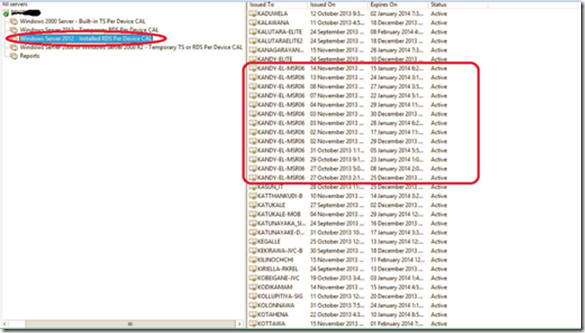 Now this is intriguing!! Why is the same device consuming multiple RDS CALS? The administrators usually notice this issue when they start running out of per device CALS and when they check the list of issued per device CALS in RDS licensing Manager, they notice that multiple RDS CALS have been issues to the same device.
To temporarily get around this issue you can revoke licenses but the catch is that you can only revoke 20% of the CALS at one time. This may not help if you have very few CALS left and you see that multiple per device CALS are being allocated to multiple machines.

Below are the possible reasons which can cause this issue:

1.    If you have built multiple machines using the same image:

a)    There could be times when you used a syspreped image or Citrix provisioned machines where the HardwareID was defined in the image because of which each device which was built using that image got the same hardware ID. This would result in the below situation:

Resolution In order to get around this issue, you need to rectify the image itself and use a syspreped image which does not have MSLicensing Key information of the original machine hardcoded to it

b)    You Create a Citrix Provisioned machine where all the machines are booted from a pre-defined image and all the changes are lost after reboot. So every time the machine connects it gets a new ClientHWID and this is lost on the next boot. The next time the machine connects to the RDS Host, it gets a new Client HWID and hence a new RDS license is issued. Citrix XenDesktop provisioned machine with different hardware ID which can cause the license server to recognize it as different device and issue duplicate licenses

Resolution It is recommended to use Per-User RDS licensing in these scenarios, because the licenses are reverted when the user logs off, hence the number of licenses will not be affected.

2.    This could also happen if you have a script in place which deletes MSLicensing Key at shutdown.

If machines are cloned, sometimes third party cloning tools do not wipe out all the stale information and the cloned clients although with a different hardware it would give the same computer name to the RDS Host.

Though the Hardware ID might be different, if two different machines have the same name, looking at the Licensing Manager you might think that the same device is using multiple CALS but it is not.

For some reason if a machine that got a CAL once is re-built then due the new installation it got a new hardware ID and when connected again to Remote desktop server and hence got another CAL.

Resolution The old CAL will be freed within next 52-89 days after being issued or you can simply revoke the old CAL.

5.     Multiple Hardware ID’s in the MSLICENSING Reg key of the client machine:

This could happen if the license has been corrupted. If it has already been corrupted, a new hardware ID will be generated automatically for the client during next RDS Host logon and hence you may notice duplicate CALS for that device.

Resolution To determine which one you need to delete, go to the server, and open PowerShell “As Administrator” on the RDS License server, and execute the following command: get-wmiobject Win32_TSIssuedLicense | export-csv [outputfile]
Then in the output file, find out the client who is issued with multiple licenses, then record the hardware ID within the license which is not the most recently issued.
Then go back to the client, open registry, locate to HKEY_LOCAL_MACHINE\SOFTWARE\Microsoft\MSLicensing\HardwareID and check the ClientHWID which matches the one you just record, delete the HardwareID subkey.

1.    Look at TerminalServices-Licensing event logs.
2.    Generate per device RDS Per device Cal report to verify if the issue is because of multiple Hardware ID’s issued to the same machine, or same hardware ID issued to different machines or due to duplicate Machine names with different Hardware IDs.

This shows Keypack ID, License ID, Name of the client device along with Hardware ID and Expiration date of the CAL as shown below.

3. Use the RDS Client License Test tool (TSCTST.EXE) provided with the Windows Server 2003 Resource Kit on the client machine for which you see multiple CALS to display details about the license token residing on a client device. It is a command-line utility that displays the following information by default:

By using the /A switch, the following additional information is displayed:

3. If you are still not able to find the cause, Microsoft professional can help you collect an RDS Licensing ETL trace while reproducing the issue. The etl trace should tell what name / HWID was used to request new licenses.

1.    If all per device CALS are exhausted and you are working to find the case of multiple RDS CALS being issued to same device, temporarily you can change the licensing mode to per user to allow remote sessions. However, this should not be a practice as it will be a breach of Microsoft Licensing agreement.

2.    Regenerate the ClientHWID and Rebuild the License server database ( KB273566 ) and reinstall the CAL Packs to restore all the CALS.

The hardware ID can be regenerated by deleting the below keys manually: