Happy New Year!  We're starting off 2008 with a significant post regarding changes to Remote Administration in Windows Server 2008.  OK, it's not quite as dire as the title makes it out to be, but this is quite a significant change.  If you recall from our post on Session 0 Isolation , users can no longer connect to Session 0 on Windows Vista or Windows Server 2008 by design.  On earlier builds of Windows Vista Service Pack 1, if you run mstsc /? from the command prompt, the following screen is displayed.  Note the section in red below.  If you use version 6.1 of the Remote Desktop Client included , in order to connect to the console session for Windows Server 2003, you should use the /admin switch instead.  RDC 6.1 is included with the following operating systems: 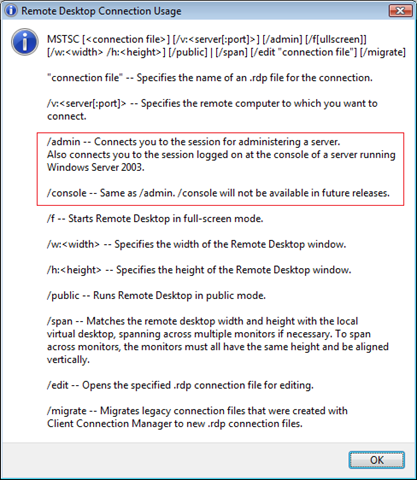 So why is this important?  Obviously if you have shortcuts, applications or scripts that rely on the /console switch, they will be affected by this change.  One of the biggest impacts will be for administrators who connect to their servers using /console to perform application installations or maintenance.  This functionality will still be available, however you will just need to use the /admin switch.  There are also implications for developers who use the ConnectToServerConsole property of the IMsRdpClientAdvancedSettings interface.  There is a different interface and property that they will need to use - namely the ConnectToAdministerServer property of the IMsRdpClientAdvancedSettings6 interface.

The Terminal Services team has posted more information on their blog - the link is below.  As always, we welcome your feedback.  Until next time ...