Turn on suggestions
Auto-suggest helps you quickly narrow down your search results by suggesting possible matches as you type.
Showing results for
Show  only  | Search instead for
Did you mean:
Microsoft Fixit for Printing
By


Good morning AskPerf world!  Jeff Hagler from the Performance team here to chat about printing.  How many of you have ever dealt with an issue where you just knew that something was wrong with your print spooler but could not quite put a finger on it?  Maybe print jobs were slow, certain users could print to some printers but not others, or maybe nobody could print at all?


Back in the day, we included a tool with the Windows 2003 Resource Kit called Cleanspl that was able to make sure that the spooler service was configured correctly and clear of any third party dependencies that may be referencing bad/missing files.  Cleanspl is a great tool, but by being hidden in the resource kit, it was rarely used.  Up until now, this tool did not exist/work in recent Operating Systems like Windows Server 2008..


We are happy to announce the same functionality in Cleanspl (and a bit more) has been built into one of our Fixits that will run on Windows XP/2003 and Windows Vista/2008 and can be downloaded from Fixit 9662904 .


This Fixit package consists of two modes: Light and Full . Light will make changes to the spooler that should not require your end user to make any changes, while the Full mode will restore the print spooler to defaults and will require a complete reinstall of your print drivers and printers.  Think of the Light version as something you can run on any system (print server, terminal server, normal client system) as a first troubleshooting step, and the Full version as something to reserve for systems that get their printers and print drivers pushed down from Print Servers (via Group Policy and Point and Print).  Let’s cover the key part of the previous statement again for Fixit 9662904 – do not run the Full version on a Print Server as it will delete all the printers.  Basically, it puts your Print Environment back to the way it was when the OS was installed.


When you first run the Fixit on your system, you will be prompted with the normal installation/licensing agreement screens.  You will then receive the dialog box below.  To run the Light version, just click Next.  To run the Full version, you will need to check the box to “Reset the print spooler to defaults”. 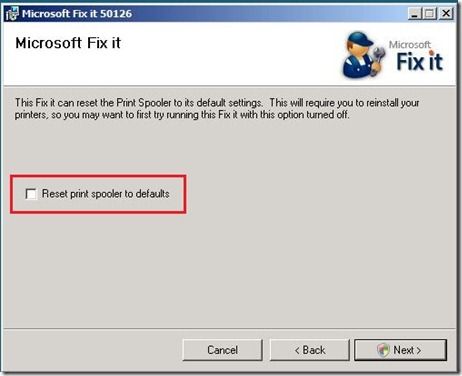 Here are the details on what actually happens during each of these cleanups:


As you can see the light mode of this tool is a great first pass at troubleshooting a myriad of Print Spooler issues, with minimal risk/downtime for your users.  Give it a go and let us know how it works for you.