Turn on suggestions
Auto-suggest helps you quickly narrow down your search results by suggesting possible matches as you type.
Showing results for
Show  only  | Search instead for
Did you mean:
Introduction to ActiveX - Part One
By

Introduction to ActiveX - Part One

On Tuesday, we wrote about the upcoming changes in behavior for how Internet Explorer handles embedded controls .  Today we're going to discuss the basics of ActiveX controls themselves - what they are and why they are important.  We're not going to go into how to create and code ActiveX controls, but we will briefly cover some of the important ActiveX attributes.  So, let's get started ...

An ActiveX control is essentially a simple OLE object.  Originally, ActiveX controls were called "OLE controls" and used a .ocx file extension.  This was actually the second-generation component architecture.  The first generation was the Visual Basic Controls (.vbx).  OLE controls were renamed ActiveX and continue to use the .ocx extension.  ActiveX controls enable a program to add functionality by calling ready-made components that blend in and appear as normal parts of the program.  They are typically used to add user interface functions, such as 3D toolbars, a notepad, calculator or even a spreadsheet. 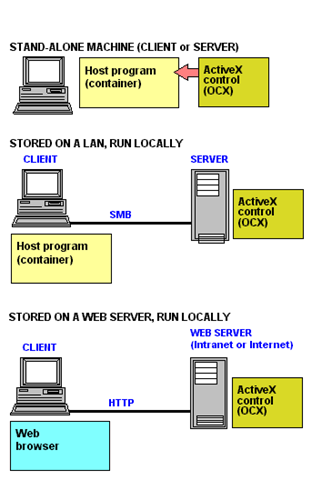 COM is really the heart of ActiveX - for example, if you have ever inserted an Excel spreadsheet object into Microsoft Word, you can see that although only Word is open, you can still work with the Excel spreadsheet normally.  This is referred to as embedding - when one type of document or application is placed inside another.

The image shows how different methods of ActiveX control usage:

So why are ActiveX controls so important?  ActiveX Controls have become the primary architecture for developing programmable software components for use in a variety of different containers, ranging from software development tools to end-user productivity tools.  For a control to operate well in a variety of containers, the control must be able to assume some minimum level of functionality that it can rely on in all containers.  ActiveX controls are written in a variety of methods: Microsoft Foundation Classes (MFC), Active Template Library (ATL), C++, or languages that support COM, such as Visual Basic.

The most crucial attribute of this object is the CLASSID which is a string that specifies the identification number of the control.  In a client-side browser environment, the CLASSID string is preceded by the text CLSID: So what are some other attributes that you might see?

CODETYPE - specifies the Internet media type.  This will save download time if the computer does not support a particular codetype DATA - contains the URL pointing to data required by the object.


DECLARE - if this attribute is present, the browser loads the object into memory.  It will not execute until it is referenced


HEIGHT / WIDTH - sets the height & width of the object in pixels


NAME - if you use an object in a form, the browser will not consider the object as part of the form unless the object is given a name

That brings us to the end of Part One of our introduction to ActiveX controls.  In our next post on ActiveX, we will cover ActiveX controls specifically within the Internet Explorer environment.