Turn on suggestions
Auto-suggest helps you quickly narrow down your search results by suggesting possible matches as you type.
Showing results for
Show  only  | Search instead for
Did you mean:
How to migrate local ports when doing print migration
By

How to migrate local ports when doing print migration


Hello Askperf! My name is Tingu, and today I’m going to talk about an interesting print migration issue I had a few weeks ago.


We had a case where an application server was running on Windows 2003, where more than 400 print queues were created. The port was created as a local port to forward the print job in case of a failure as noted in the “ Transfer documents to another printer ” Technet article.


The port was configured as \\printservername\printer.  See example screenshot below: 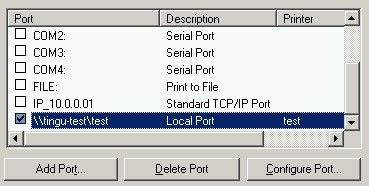 Here, we were trying to move the application to a 2012 R2 server and wanted to migrate all the print queues to the new server. We used printbrm to migrate all of the local printers.  But the problem we ran into is that it did not migrate the local ports.


When we started the migration, we did not see the local ports listed: 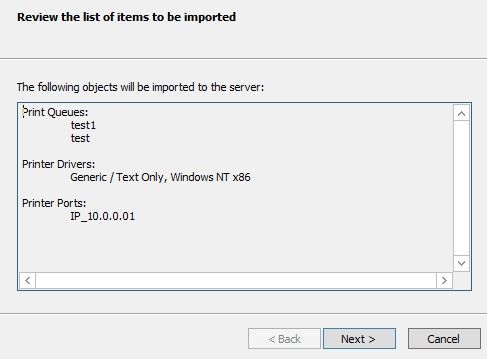 Additionally after the migration, the port was not present:

We tried to add the port manually, but gave us the error “port already exists”.  Additionally, the registry shows that the printer is set to use the forwarder.

We really needed to get the local ports migrated as it can be a tedious task to re-create all the ports and map to their respective print queue.


We created a test lab and saw the same issue while migrating.  It did not matter from/which OS we were migrating.  During the migration, we saw an event ID 81 on the 2012 R2 server. (This event is not triggered if you are migrating to 2003 or 2008R2):


So what we determined is that when you use printbrm for migration, it will not migrate the local ports.  The reason is that the local port is specific to the server, and it may cause conflicts or not work if you migrate it to a different server.  But in our case it’s a forwarder, and we need it to be migrated.


Further testing revealed that if a local port to which the printer is mapped is already present on the destination server, then the migrated printers will use that local port for the printers.


For example: on the source server you have a printer mapped to LPT1, and the destination server has LPT1 port available; then after the migration, the printer will be set to use that port. We created a forwarder on the destination server for a test printer before migration, and after importing the printer, we see that the port is mapped accordingly.


Now the question is, how do we migrate multiple local ports at a time?


Here is what we did… 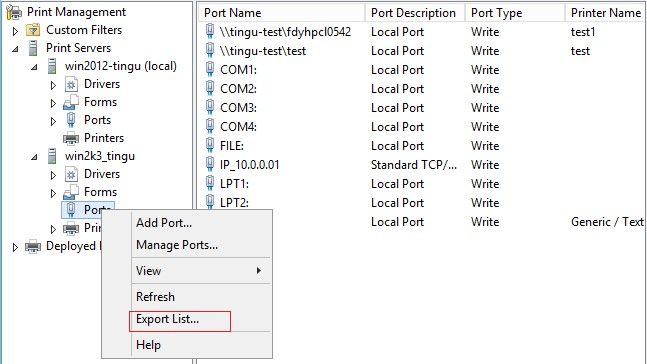 
We copied all of the required ports into notepad, and saved it as a .ps1 file:

We ran the .ps1 file as admin, and all of the ports got created on the destination server!


After that, we followed the normal migration procedure and all printers got mapped to the correct port.


I hope this information will come in handy the next time you are working through a printer migration.