Turn on suggestions
Auto-suggest helps you quickly narrow down your search results by suggesting possible matches as you type.
Showing results for
Show  only  | Search instead for
Did you mean:
Component Service MMC hangs if a remote computer is offline
By

Component Service MMC hangs if a remote computer is offline


The Component Services snap-in under Administrative Tools allows you manage the COM+ applications on different computers on your network. This is done by adding the computer to a list which is then saved for the next time you open the application. While this means you don't need to keep adding a computer, it can also cause the application to appear hung if a computer in the list no longer exists.

In the Component Services snap-in, if a you try to add a computer name to the Computers node that does not exist or is not responding, or that ceases to respond at some point, the MMC may become unresponsive. This probably looks like a hang, since the period of unresponsiveness is at least a couple minutes and increases with each user input. If the invalid node is not removed from the Computers list, this will occur every time the user loads the Component Services snap-in and attempts to expand the Computers node. The same behavior may be noticed if a computer that has firewall enabled is added to the list.

The MMC should respond after a while, but the time span of the hang can vary depending on the number of stale objects that are available under the Computer node. 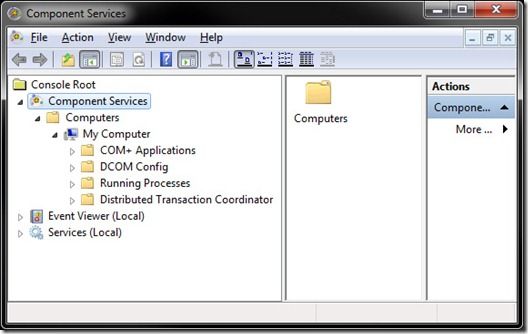 The following work-arounds can be used to get around the period of unresponsiveness:

2. Drop down into the Computers node from the Component Services node.

3. Make a note of the computer names in this list (apart from My Computer ) that are no longer available on the network.

4. Close Component Services (you may need to kill the application from Task Manager if it is not responding).

5. Open the HOSTS file in a text editor (the file can be found in \System32\drivers\etc\; backup a copy of the file first)

6. Add entries for each computer name you noted, and assign each the loopback IP address (127.0.0.1). This will result in a quick valid response from each computer name when the plug-in tries to access it. It won’t be the real IP address of the unavailable computer, but the MMC does not know that.

8. Reopen Component Services and drop down to the Computers list.

9. You may take a bit of time, but now you should be able to select the invalid computers in the list and remove them.

10. Once the invalid computer names are removed and the plug-in is responsive when opened, edit the HOSTS file again to remove the entries you've added.

The following VBS script can be used to delete the reference of the computers from the COM+ catalogue. Copy the below code to a notepad file and rename it to VBS (eg- RemoveMachineComAdmin.vbs). While entering the name of the server make sure it is entered as it was used in the component console; it is case sensitive.

NOTE: Microsoft does not support the creation or functionality of custom scripts. This script is supplied as an example, and is not officially supported. Use at your own risk.

msgbox ("You cannot delete My Computer")

'Get the Machines collection in COM+ catalog

'Get the count of the number of objects

'Get the correct machine name

For Each MachineObj in Machines

Thanks for your time,