Turn on suggestions
Auto-suggest helps you quickly narrow down your search results by suggesting possible matches as you type.
Showing results for
Show  only  | Search instead for
Did you mean:
Basic Printing Architecture
By

Printer sharing, information retrieval, and data storage are among the most frequently used network services.  This also means that when something major happens to a print server or file server - lots of people are adversely affected.  Issues with Print Servers and the Print Spooler are very common issues for the Performance team.  So today, we're going to kick off our series of posts on Printing with an overview of the Windows Printing Architecture and the Print Spooler.

Broken down into basic elements, the Windows printing architecture consists of a print spooler and a set of print drivers.  The print spooler is the primary component of the printing interface.  Most administrators are familiar with the spooler as an executable file (spoolsv.exe) that manages the printing process.  In a default configuration, the spooler is loaded at system startup and continues to run until the operating system is shut down.  The print spooler consists of a set of Microsoft and vendor components that perform the following tasks:

Below is a simplified view of the print spooler components.  When looking at this diagram, if the printer hardware is local to the system, then the "client" and "server" pieces are all on the same machine. 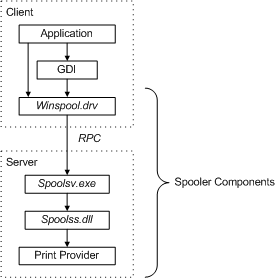 Winspool.drv - This is the client interface into the spooler.

Spoolsv.exe -  This is the spooler's API server.  It is implemented as a service when the OS is started

Spoolss.dll - Spoolss.dll acts as a router, determining which print provider to call based on a printer name or handle supplied with each function call.  It then passes the function call to the correct provider.

OK - so let's discuss print providers.  The print provider is responsible for several functions, including directing print jobs to local or remote print devices and print queue management operations such as starting, stopping and enumerating print queues.  Print providers implement a common set of capabilities that are defined by a set of API functions.  These functions are called by spoolss.dll .  The diagram below illustrates possible flow paths involving different print providers. 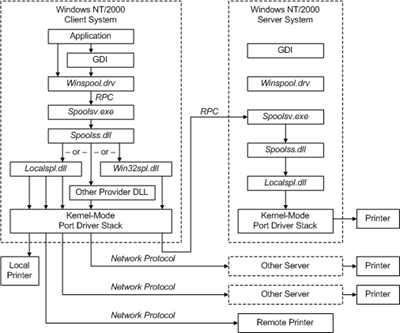 The following print providers are supplied by Microsoft in Windows 2000, XP & Windows Server 2003:

localspl.dll - this is the local print provider which handles all print jobs directed to local printers

Printer manufacturers may also create their own network print providers.


And that brings us to Print Processors.  Print processors are user-mode DLL files that convert the spooled data from a print job into a format that is understood by a print monitor.  When a print job is spooled, the data is contained in a spool file.  The print processor reads the file, performs the conversion on the data stream and writes the converted data to the spooler.  The spooler sends the data to the correct print monitor.  Print processors are associated with printer drivers during driver installation.  The default Print Processor provided with the operating system is winprint.dll .

Lastly, let's talk about Print Monitors.  These are user-mode DLL's responsible for directing a print data stream from the spooler to an appropriate port driver.  When we talk about print monitors we are actually referring to two different types of monitor.  First, there is the language monitor which provides a full-duplex communications path between the print spooler and bi-directional printers that are capable of providing software-accessible status information.  In addition, the language monitors add printer control information to the data stream.  It is important to note that Language monitors can be used to add any post spooling processing.  In addition to the Language monitors, we also have Port monitors.  These are responsible for providing a communications path between the user-mode print spooler and the kernel-mode port drivers that access I/O port hardware.  Port monitors are, as the name suggests, responsible for management and configuration of the printer ports on a server.

And that will do it for our look at the Basic Printing Architecture.  In future posts, we will be looking at drivers, troubleshooting and policies.  Until next time ...