Turn on suggestions
Auto-suggest helps you quickly narrow down your search results by suggesting possible matches as you type.
Showing results for
Show  only  | Search instead for
Did you mean:
“Unknown Publisher”??? Part Two
By


Hello AskPerf readers, it’s Don Geddes again and I’m back with that post that I promised you about that pesky dialog box that we all know so well. In this post, I’m going to walk through some common client/server scenarios and explain the technical details of what generates the “Unknown Publisher” dialog as well as what has to be done to hide it. I’ll try to make this as brief as possible without losing the important technical details.


To start, I want to describe the common scenarios and configurations that exist today so that you can better understand what your options are. Depending on your specific scenario, you may or may not have an option to hide the dialog, so it is important to know where your configuration fits in these scenarios.


This scenario is similar to Scenario 2 but it adds the ability to use group policies to configure the client machines and make sure Vista users never see any dialog.


So now that I’ve defined the scenarios, let’s look at the technical details of what is happening with this prompt. First, I will start with a little history of how things used to work and then explain how the RDP 6 client changed things.


With the RDP 6 client, the ActiveX control is now included with the Remote Desktop client installation package, and any previous versions that were installed are upgraded to the new version. When a user that has upgraded their Remote Desktop client visits a Remote Desktop Web Connection or TS Web Access web page, they no longer need to download the ActiveX control, it is already installed and should be enabled in Internet Explorer via the Manage Add-Ons user interface. If the control is not enabled then a message is displayed informing the user that they must enable the ActiveX control before they can make a connection. Enabling the control though does not imply that the connection itself is safe, especially when device redirection is involved. Every connection that is made to a Terminal Server must now be explicitly allowed by the user on a per-machine basis. So the prompt is designed to inform the user of two things:


1. The Remote Desktop Client cannot guarantee that the server they are attempting to connect to is who it claims to be


2. The remote computer may be allowed to access local resources


The user cannot control the identity verification of the server; this is something that the server administrator must configure. The user can however choose to not allow access to specific local resources, so the checkboxes under “Allow the remote computer to access the following resources on my computer:” are there to give the user a way to disable access to those resources. The user must then click the Connect button before the connection will be made.


2. The RDP file received by the client must be signed, but to be more specific, the RDP file itself must contain a signature blob within it that is generated when the RDP file is signed. This blob allows the client to verify the identity of the server that it is connecting to.


If requirements 1 and 2 are met, the user is allowed to check a box titled “Don’t ask me again for remote connections from this publisher”. Checking this box writes a key to the client registry that is based on the certificate that is used to sign the RDP file. The next time the user opens this same connection and is sent an RDP file with the same signature, the prompt will not display. The key is named PublisherBypassList and is written under:


When an RDP file is signed, two additional parameters are added to let the RDP client know that the connection is signed. You can see this by looking in the RDP file itself and looking for the signscope and signature fields:

The “s” after signature designates a string value and this field would be populated with a hash that is generated from the signature.


So how do you implement RDP signing? In this next section I will give you the details for each of the previously mentioned scenarios.


In this scenario, you cannot meet requirement 1 because the Remote Desktop Web Connection does not send the client an RDP file. Even if you modify your web page to send an RDP file to the client, you do not have a way to sign the RDP file and satisfy requirement 2. With no way to allow the client to verify the identity of the Terminal Server that it is connecting to, the user will never be allowed to click the check box and write the registry key that hides the prompt.


Also keep in mind that since you do not control the machine that is used to connect to your website, you cannot also control the RDP client that is being used. If a Windows XP machine that is still running the older 5.1 or 5.2 client connects, then they will not see the prompt.


The good news is that you are not alone in this scenario and there may be light at the end of the tunnel soon. Also, if you have access to a Windows Server 2008 server but cannot deploy it yet, there is a way to use rdpsign.exe to sign an RDP file that can be then served from a Windows Server 2003 web server. This will require that you modify your web page to send the user an RDP file, and if you use IIS you need to add a mime type value for application/x-rdp so that Internet Explorer knows what to do with the file that it is sent.


If you’re running Windows Server 2008 and TS Web Access, all that you need to sign your RDP files is built-in. What you need to do is make sure you use the correct certificate to sign the RDP file and then use either the RemoteApp user interface or the command-line tool rdpsign.exe to sign the RDP file. The built-in help has information on how to sign your RDP file, here is an excerpt with the details:


If you use a digital certificate, the cryptographic signature on the connection file provides verifiable information about your identity as its publisher. This enables clients to recognize your organization as the source of the RemoteApp program or the remote desktop connection, and allows them to make more informed trust decisions about whether to start the connection. This helps protect against the use of .rdp files that were altered by a malicious user.


If you are already using an SSL certificate for terminal server or TS Gateway connections, you can use the same certificate to sign .rdp files. However, if users will connect to RemoteApp programs from public or home computers, you must use either of the following:

Once you’ve signed your RDP files, users that connect to the TS Web Access site will download the signed RDP file and receive a prompt similar to the following: 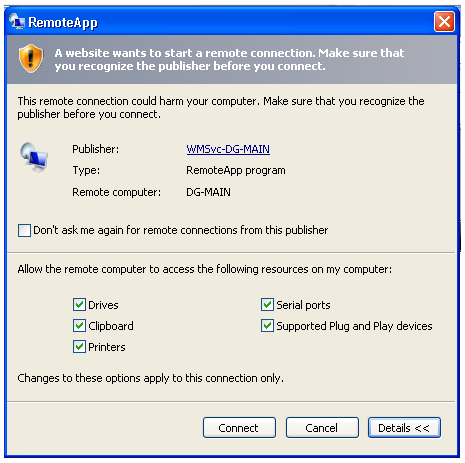 The user then clicks the checkbox “Don’t ask me again for remote connections from this publisher” and the dialog will not display again for connections to this server.


If you have Windows Server 2008 and you also control the client machines that are connecting, you can use group policy to configure Vista clients to always trust RDP files from specific publishers. Unfortunately this policy is only supported on Windows Vista but when configured properly, Vista clients would never see a prompt at all as long as the RDP file is signed.


You must ENABLE this policy and then specify the SHA1 thumbprint from the certificate(s) used to sign your RDP files.


And with that, we’ve reached the end of this post.  There is a lot of information here, hopefully this sheds some light on the issue and will help you work through some of the pain points.  This issue is one that we are keeping an eye on, so stay tuned to our blog for other potential workarounds for Scenario 1.