Hello Insiders!  Today we’re releasing build 91.0.852.0 to the Dev channel.  We’ve got lots of exciting changes to talk about today, but first, an opportunity for extension developers.  If you’re shipping an extension from our Add-Ons website, and would like to have it featured on the site’s main landing page, check out how here:  https://techcommunity.microsoft.com/t5/articles/get-your-extensions-featured-on-the-microsoft-edge-a....  As for the changes:

Version 91 is coming to a close, and we expect next week’s builds to be the last for it in Dev.  Thanks for helping us get here!

How to hide extension icons without the extensions button enabled? Its grayed out.

Smart Copy was also missing, now it is also back and i'm curious what will happen to it

It looks like the top padding in the dropdown of a folder has been removed - I like it, but it would take time to adjust lol 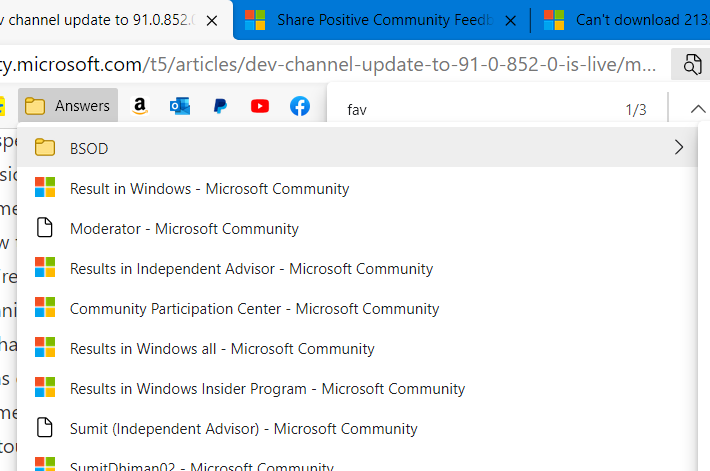 @josh_bodner Seems it ate icons from the "sites" on a newly-opened tab. Running on Linux (Fedora 33, XFCE desktop).

@josh_bodner The same problem as above. The icons are not displayed on new tab page.

@josh_bodner after the latest update the icons in New Tab are all with broken shortcuts.
2 Likes
Reply

@Adamtech990  You guys get the news and so on with your startup tab/new tab? Hell, I can't even get anything more than a blank 'new tab' page with the chosen background and a search bar. I haven't seen the news in weeks! Let alone any of my recent sites.

Works fine with Windows 10, though.

@morgfarm1 Yes, I can see the news on Fedora 33/XFCE, and before the last update, the icons as well. I wonder if you have some Edge setting set differently?

I've been LOOKING and couldn't find; theoretically it would have carried over from Windows 10 once profiles was supported. It would work sporadically after a total reboot but nothing at all for the last couple weeks. Any idea which setting I'm missing with a Linux install? Theoretically all Linux distros should be using identical Edge builds.
0 Likes
Reply

For me, the "cogwheel" ion in a new tab gives layout choices for the page.
0 Likes
Reply

Either I'm missing something, or it doesn't exist in my build. I appended a screenshot of what i see near the top of this thread - Maybe you can see something I cant.
0 Likes
Reply

This really is different from any of the layouts I am offered. No cogwheel, no weather display. Even if I turn everything off in customizations, the cogwheel icon itself still appears in the right upper corner. Sorry, I have no further suggestions. Hope someone from MS can look into it.
0 Likes
Reply

To hide extensions, you need the extension button on toolbar, the "hide" option takes them under that button.
0 Likes
Reply

Edge team are testing and rolling out 2nd row of NTP top sites, that's probably why we're seeing some of the icons in there broken at the moment. 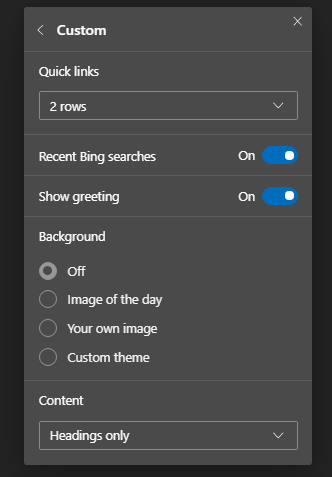