Turn on suggestions
Auto-suggest helps you quickly narrow down your search results by suggesting possible matches as you type.
Showing results for
Show  only  | Search instead for
Did you mean:
Take full advantage of Low-Code as a code-first developer
By 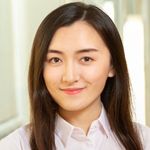 Take full advantage of Low-Code as a code-first developer

Understanding the value of low-code apps for professional developers

By now, you’ve probably heard of low-code application development. Maybe you’ve read about it in a blog or in a low-code whitepaper courtesy of your favorite market research firm. What you might not have heard is that low-code development isn’t just for citizen developers, it’s for code-first developers too.

Low code apps aren’t designed to replace or automate your job. Rather, they empower you to accelerate application development by collaborating with citizen developers while maintaining governance of your apps at scale. Read on to discover how to do more with less by adopting a low-code development environment.

Low-code development environments bring together citizen developers and code-first developers to encourage collaborative coding. The collaborative nature of low-code apps allows stakeholders from across business lines to provide expertise and influence the direction of an application’s development. Business and IT professionals can now provide value through their unique experience and perspectives to maximize the impact of an application.

The benefit of collaborative development extends to the debugging process as well. As a developer, the end-user experience for your API is always top-of-mind. Leverage low-code apps to identify pain points and work with citizen developers to debug and optimize code in a common platform. Additionally, low-code apps relieve some of the headaches associated with the traditional debugging process. With Microsoft’s Power Platform and VS Code, key features like Monitor and port tunneling for ASP.NET Core projects make debugging easier even for seasoned developers.

Low-code apps don’t just bridge the gap between citizen developers and code-first developers, they also dramatically accelerate your development timelines. By leveraging data from the tools and systems you already use, you avoid the hassle of lengthy cross-platform data migration. This benefit, along with the ability to customize common code components, allows you to build basic front ends in minutes.

The Power Apps Component Framework (PCF) allows you to save time by making custom code components as reusable visual extensions. These components are metadata driven, performant, and can accelerate your time to development.

These PCF components can be used on Canvas as well as model-driven apps, and can be packaged into standard Power Platform solutions. Examples of what these code components can do include the ability to transform numeric text into interactive dials or sliders and converting lists into visually friendly experiences like calendars or maps.

Furthermore, development on the front-end is streamlined through drag-and-drop visual interfaces complete with pre-built UX components. The drag-and-drop approach allows citizen developers to work alongside code-first developers, freeing them to work on more code-intensive work.

Back-end developers focused on database and API management can easily extend their tools and processes with low-code environments. With Power Platform you can maintain control over all your custom connections and API endpoints to stay compliant, collaborative, and organized across a variety of platforms.

API management, once reserved only for code-first developers, is now accessible to citizen developers with Azure API Management Connector on Power Platform. This platform reduces development time by simplifying the creation of APIs to the Power Platform for easy discovery and consumption. API Management accelerates application development, unifies your management experience, and provides full observability across all internal and external APIs.

Hundreds of out-of-the-box connectors, and limitless custom connectors, allow underlying services to talk to Power Automate, Power Apps, and Azure Logic Apps. This improves your productivity by enabling you to build applications without moving your data.

Automate application deployment and governance at scale with low-code apps

You might be worried that a low-code application development platform will produce a cascade of ungoverned applications across the enterprise. With Power Platform, you can rest assured that IT admins are equipped to proactively govern with Managed Environments for Power Platform. Rather than requiring IT admins to govern assets from standalone providers with unique governance capabilities and limitations, admins can enjoy a bird’s eye view of their entire Power Platform usage via email updates. IT admins can see every asset created within the platform, unlocking the potential to control access, monitor usage, and govern at scale. 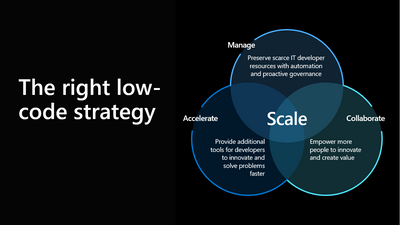 This plan provides a full list of capabilities offered by the Power Apps platform. Using this plan, you and your team of developers get an environment to start developing and testing apps right away. Your team will benefit from premium and custom connector support, data modeling with Dataverse, workflow automation with Power Automate, and more. 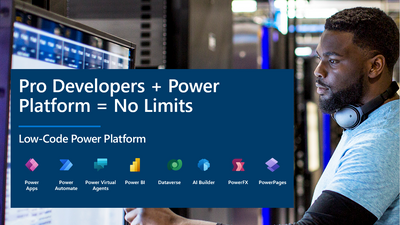