Turn on suggestions
Auto-suggest helps you quickly narrow down your search results by suggesting possible matches as you type.
Showing results for
Show  only  | Search instead for
Did you mean:
Azure Cognitive Services releases new languages and voices for Neural Text-to-Speech
By

We are glad to announce that two new languages are introduced to the neural TTS portfolio. With that update, we now support 147 languages/variances in total. In addition, 46 new prebuilt voices are available in preview for a growing list of languages, besides a set of new emotions enabled to many existing voices. That adds up to 446 voices in the neural TTS prebuilt voice family.

With other Cognitive Services including Speech-to-Text, OCR and Translator extended to 100+ languages, Azure AI is one big step closer to its ambition to empower every organization and everyone on the planet to achieve more, without any language barriers. 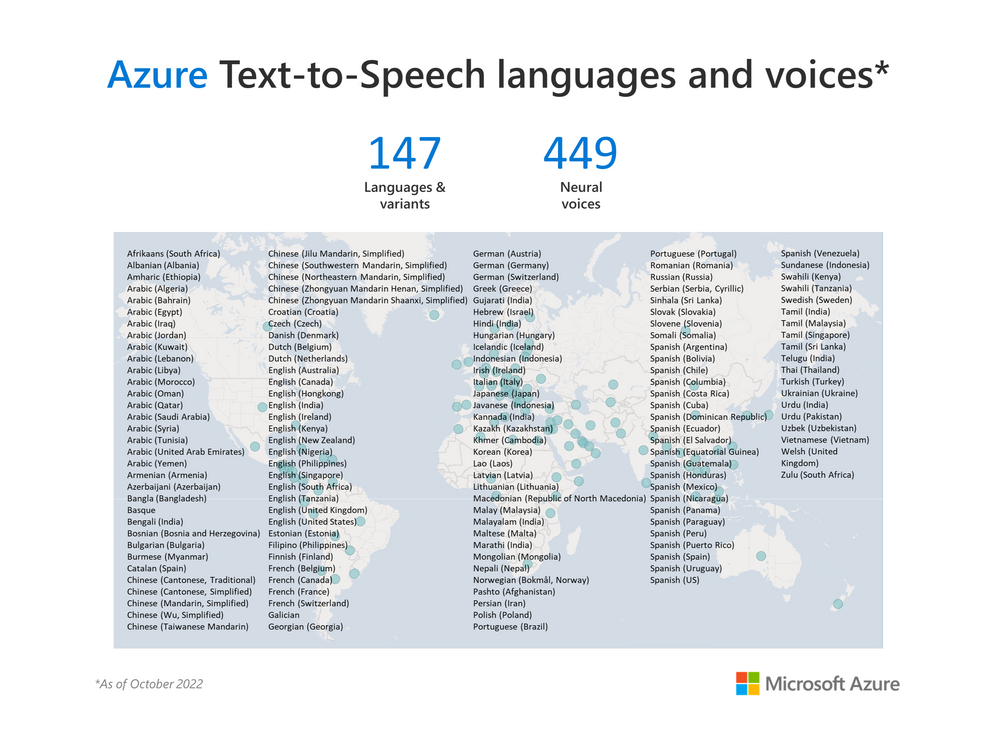 While there are thousands of spoken languages in the world, the top 1% (~70 language) accounts for 80%+ of the global population. Within just a few years of development, the TTS technology has been available in many commonly spoken languages and has been updated in these languages with many advanced features available. However, due to the lack of training data or business needs, there is almost nothing available for those less spoken languages. Inspired by the vision to remove the language barrier for everyone and powered by the low resource setting TTS technology, we keep working to expand our capability to support those less touched languages in the world.

Today, we are adding 2 new languages to our neural TTS portfolio. This is just a small portion compared to our goal, but we are on the way!

Check out how the voices in these languages sound like with samples below:

2 new variances of Chinese are in public preview

We are glad to introduce two new language variances in Chinese that are now in public preview: Chinese (Wu, Simplified) and Chinese (Cantonese, Simplified). Hear how they go with samples below:

Discover the full list of supported languages for Neural Text to Speech, in addition to Microsoft Edge Read aloud.

46 new voices are in preview for some popular languages

For each language that we support with prebuilt neural TTS voices, we have provided at least one female and one male voice per locale. However, in the real world, there are scenarios that require one or more voices to reflect diversity and natural conversation. To directly address customer feedback, we work rapidly to bring a richer choice of voices in different languages. In this release, we are starting to introduce 46 new voices in preview for English (Australia), Spanish (Spain), Korean (Korea) and Japanese (Japan).

These new voices cover different personas and age groups, which can bring more choices and variety for business scenarios. These voices now are in public preview, available in 3 regions: East US, West Europe and Southeast Asia.

We encourage you to try the new languages and voices below. Feedback is welcomed to help inform which voices will be made for General Availability in all regions, depending on customer satisfaction.

Customers often request the voices to be able to express different styles and emotions based on different content. To address this most frequent ask, we are bringing the multi-style capability to more and more voices and languages.

Here are some voices that we have recently enabled to perform a more casual chat style or a more cheerful emotional style, besides their default general tone.

In May 2022, we announced 5 new voices and 10 styles on en-US in preview offering, and later in June 2022, we introduced more voices for it-IT, pt-BR and es-MX for preview. After several months' evaluation, these voices and styles are stable in service and had been used by many customers in their user cases. And we are glad to bring these voices and styles generally available to all service regions.

We are excited about the future of Neural TTS with human like, diverse and delightful quality under the high level architecture of XYZ-Code AI framework. Our technology advancements are also guided by Microsoft’s Responsible AI process, and our principles of fairness, inclusiveness, reliability & safety, transparency, privacy & security, and accountability. We put these ethical standards into practice through the Office of Responsible AI (ORA), which sets our rules and governance processes, the AI, Ethics, and Effects in Engineering and Research (Aether) Committee, which advises our leadership on the challenges and opportunities presented by AI innovations, and Responsible AI Strategy in Engineering (RAISE), a team that enables the implementation of Microsoft responsible AI rules across engineering groups.

Azure AI Neural TTS offers over 440 neural voices across over 140 languages and locales. In addition, the Custom Neural Voice capability enables organizations to create a unique brand voice in multiple languages and styles.