Since its launch, Azure Neural TTS has been quickly expanded to more languages and variants (as of May 2022, 129 languages/variants are supported). That is, however, just a small portion of 7,000+ total spoken languages on the planet today. And we have been receiving requests from our customers for more languages.

Today we are glad to announce that Speech Service’s Neural TTS is now extended to support 11 more new languages/variants, which includes more variants for those languages being used across many countries/regions such as: Albanian, Arabic in Lebanon and Oman, Azerbaijani, Bosnian, Georgian, Mongolian, Nepali, Tamil in Malaysia, Sichuan and Liaoning accent Mandarin. With this update, Azure Neural TTS now supports 140 languages/variants with 400 voices out-of-box. With other Cognitive Services including Speech-to-Text,  OCR and Translator extended to 100+ languages, Azure AI is one big step closer to its ambition to empower every organization and everyone on the planet to achieve more, without the language barrier.

Please check the few updates below: 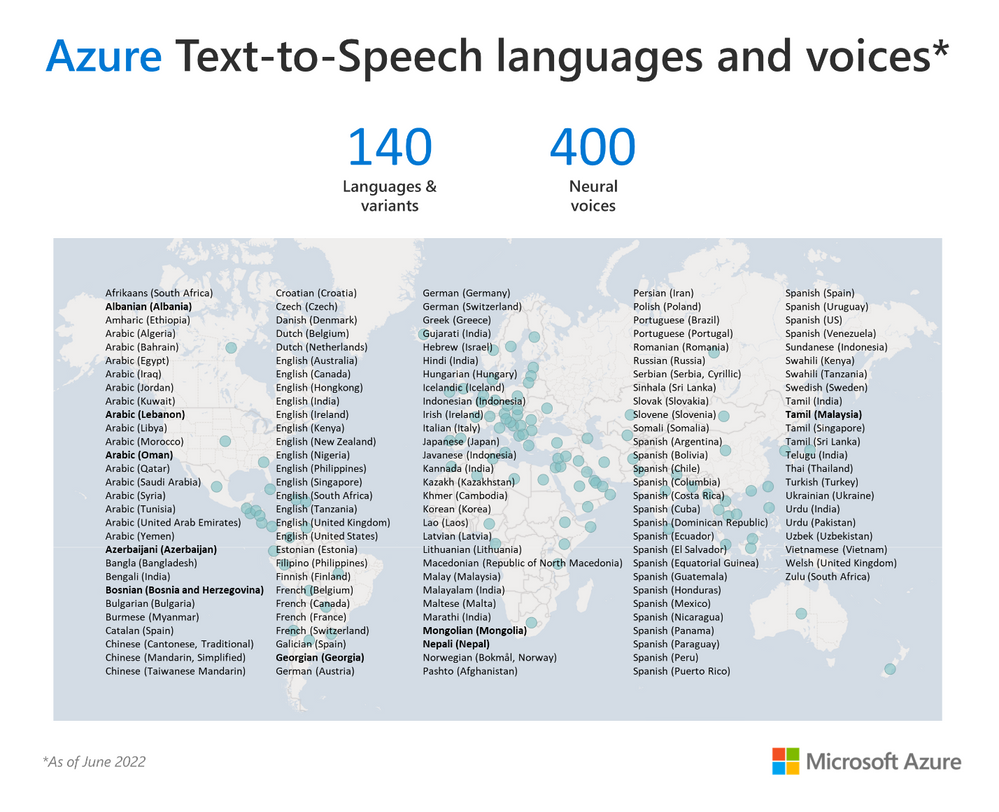 While there are thousands of spoken languages in the world, the top 1% (~70 language) accounts for the 80%+ of the global population (check reference here). With years’ development, the TTS technology has been available in many common spoken languages and has been updated in these languages with many advanced features available. However, due to the lack of training data or business needs, there’s almost nothing available for those less spoken languages. Inspired by the vision to remove the language barrier for everyone and powered by the low resource setting TTS technology, we keep working to expand our capability to support those less touched languages in the world.

Today, we are adding 9 new languages to our neural TTS portfolio. This is just a small portion compared to our goal, but we are on the way!

Check out how the voices in these languages sound like with the samples below.

Voices variety is a common request from our customers, we have good feedback for some new voices released in early this Feb for de-DE, en-GB, and fr-FR in Public Preview. For this month, we are going to GA all those 36 voices; beside that, we are going to introduce 38 new voices for es-MX, pt-BR, it-IT; and 5 Chinese Mandarin voices with new styles, including 2 accents: Sichuan and Liaoning for Public Preview.

Check out the new voices with the audio samples below

Check out these new styles as below

With these updates, we’re excited to be powering natural and intuitive voice experiences for more customers. Text to Speech offers 400 neural voices across over 140 languages and locales, which can serve you and your customers in different markets around the world.

In addition, the Custom Neural Voice capability enable organizations to create a unique brand voice in multiple languages and styles.