Is there anyone with experience in Access that can help me do a dropdown form in the 2019 version?

@Vianney1200 First, we need to be sure the terms we use are the standard terms so that we are able to communicate effectively. There is, for example, no such thing as a "dropdown form". "Dropdown" usually refers to one control type, formally called a "Combo Box". Is this what you need or want? 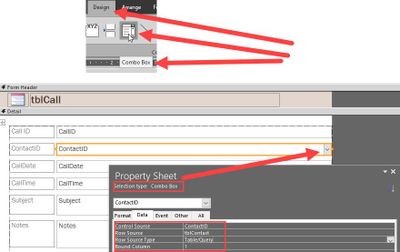 We create drop downs to present users with a Closed Domain of values from which one can be chosen.

If this isn't what you meant by dropdown form" please explain in more detail.

@Vianney1200,, if I wanted to give the impression that my Access application had dropdown forms I would try one of two techniques.  First I would try setting the application to Overlapping Windows in the Current Database section of Options.  I would then place my forms on the screen and size them according to the amount of space each one needs.  I would place command buttons on the desktop to display individual forms.   With this technique, the forms float on the screen.  Their positions can be controlled using the properties dialog.  Personally, I don't like using Overlapping Windows but users may like them.  They require too much work to maintain but then again I am over 70.

Secondly, I would consider using the standard main form/subform technique with parent/child relations (i.e., primary and foreign keys).  I would still need command buttons to display my forms and I could load several of them into memory when Access is started.   My forms can have more than 100 fields, which is a lot.  This is my preferred solution.

I could also load several forms into memory when the application starts.  This technique would give me more control of the sizes and positions of my forms.   I do this now with reports using the Makigami Wall principle for project management.  I can load as many as 17 reports into memory at one time before I run out of memory.  It is not the reports, it's the amount of data in my tables.

I suppose the reason you want dropdown forms is because your users have large-screen monitors (>24 inches).  I also have one in my home office (32" at 4K).  They are super.  I can imagine users needing multiple forms in an emergency operations center (E-911) or in a help desk center to monitor multiple cases and tasks.  HTH.

Search and Return all values that match the search criterion/criteria