Turn on suggestions
Auto-suggest helps you quickly narrow down your search results by suggesting possible matches as you type.
Showing results for
Show  only  | Search instead for
Did you mean:
[Customer story] How Marie Curie Engages Employees with Yammer
By 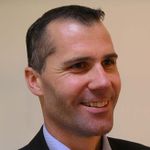 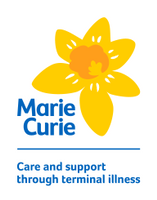 Marie Curie is the leading UK charity for people living with a terminal illness, and their families. It directly supports over 50,000 terminally ill people a year, and provides information, advice and support to many more. Over 14,000 people work or volunteer for Marie Curie in a range of roles, from nurses that provide overnight care in people’s homes, to shops that raise funds, and experts in research and policy work.

They use Yammer internally to define their strategy , celebrate what they do and create a stronger community. I spoke to Paul Knox, Internal Communications and Engagement Manager, to understand why Yammer is such a valuable tool for them.

Marie Curie must have been one of the very first charities to start using Yammer, just two months after its launch back on 2008. However, at first there was no strong purpose, “people posted status updates like old-school Facebook” is how Knox describes it.

It wasn’t until 2018 when two events brought about big changes. The first was a new Internal Communications team. They saw the potential for two-way communications and immediately set to work to boost usage. The second was a new and supportive CEO, Matthew Reed, at the start of 2019.

From his very first days in the role, Reed took it upon himself to be visible on Yammer. He posted a daily update detailing what his day had in store.

Knox describes this as immediately taking off: “The phrase ‘we love Matthew’s Yammer posts’ could be heard in almost every conversation about the new CEO. It quickly humanised a traditional corporate figure and people began to feel comfortable commenting on his posts, opening up a two-way conversation with staff, no matter what their role.”

Yammer helped Reed to learn about his new workplace too. He was active in other communities that already existed, liking and commenting on whatever caught his attention. He still comments regularly, sometimes to find out more, other times he congratulates people for their hard work. “Posts where he takes the time to thank our nurses for their out of hours work are always well received” says Knox.

Why Yammer works as a leadership channel

Not every leader is comfortable on Yammer, but it clearly works for Reed and for Marie Curie. “I think it’s the informal nature of the posts”, says Knox. “It really doesn’t feel like the CEO is issuing a statement, as it can often feel in traditional communication channels. He’s very much just putting his thoughts out there and engaging with people on their level. You can tell that it’s him posting and not something written by our team”.

An interesting marker of how their use of Yammer is maturing is that the once popular pet picture group that drove many initial sign-ups to Yammer isn’t so commonly used now. “Instead we have great conversations taking place in the LGBTQ+ Network group, as well as Let’s Talk About Death – a space to celebrate and chat about our latest awareness campaign” says Knox.

Keeping a dispersed workforce in touch is also essential for the charity. Many nurses, for example, spend night shifts alone and rarely get to meet colleagues directly. They use a lot of the time when patients are sleeping to do training modules on Marie Curie’s learning platform and have now started to share stories on Yammer too. As Knox puts it “There’s a great self-generated ethos of celebrating success and it helps people learn what they’re colleagues across the UK are up to”. 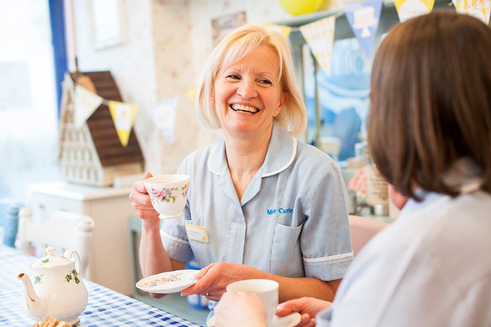 A Marie Curie nurse at a fundraising tea party.

Marie Curie decided to set up a YamJam  to give everyone the opportunity to get involved and ask questions about the future of the charity. Members of the ‘Strategy Task Force’ were briefed to take questions and stayed connected over a Skype call for the duration.  “The popularity of the Yam Jam was much higher than we predicted, so we had to set up an additional role of question monitor responsible for assigning incoming questions to members of the task force to answer” commented Knox. “It was touch and go for a while to keep the flow going, but we made it through.”.

With the introduction of Microsoft Teams, and a new intranet platform on the horizon, the Comms team are working really hard to properly define channels and optimise their effectiveness. Knox says “Yammer to date has been used for a mix of social interaction and collaborative working, but with Microsoft Teams we want to guide people to use this tool for projects instead. There will always be a small crossover, but I hope that Yammer continues to grow as a social platform, where people use the question and praise function more to celebrate their colleagues”.

It’s been my privilege to work with Marie Curie over the past year on their digital workplace strategy. I’m grateful to Marie Curie for sharing their story, particularly Paul Knox who provided detailed interview notes. 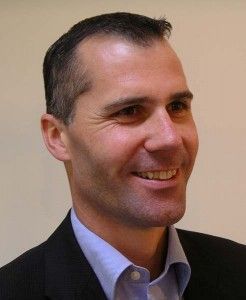