Windows Server 2012 Essentials deployment is split into two main stages: the WinPE stage for laying down the product binaries, and the initial configuration stage for guiding the user through setting up the server for initial use. Let me walk through both of these stages for you.

WinPE Stage (laying down the bits)

If you are familiar with Windows Small Business Server 2011 Essentials (Windows SBS 2011 Essentials), you may recall that it has its own customized WinPE setup and a customized sysprep wrapper called WSSSysprep. These components attempt to abstract some settings for the user and to make setup more seamless and straightforward.

One of the top pieces of feedback that we have received from our partners for Windows SBS 2011 Essentials was that the customized WinPE and WSSSysprep caused additional complexities for their deployment workflows. For Windows Server 2012 Essentials, we are moving to leverage the same WinPE and sysprep tool that exist in other Windows Server 2012 editions to provide the best consistent deployment experience for partners and customers alike.

Note: You can also deploy the WinPE stage in an unattended fashion by specifying an unattended.xml file. For more information about unattended deployment and customizations, see the Windows Server 2012 Essentials Assessment and Deployment Kit and the associated Help topic Creating and Customizing the Image . 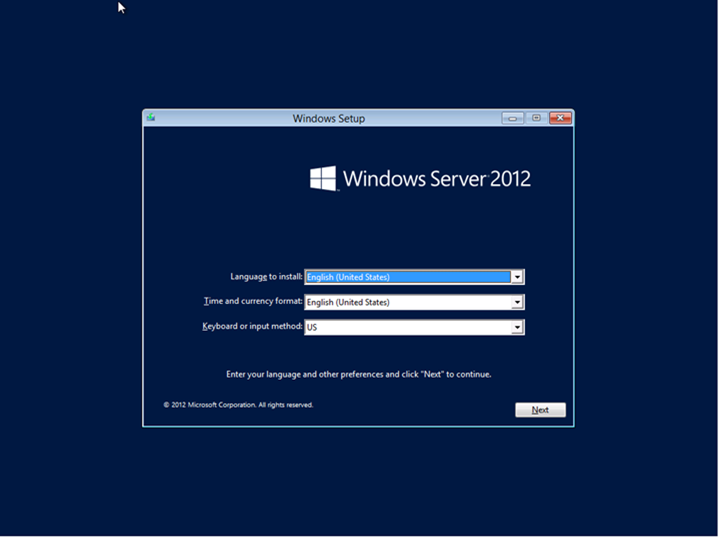 After choosing the language and locale, you will be asked to enter the product key and to accept the EULA.


Partition to your liking

In Windows Server 2012 Essentials, the user will now be able to set up drive partitions from the setup user interface. 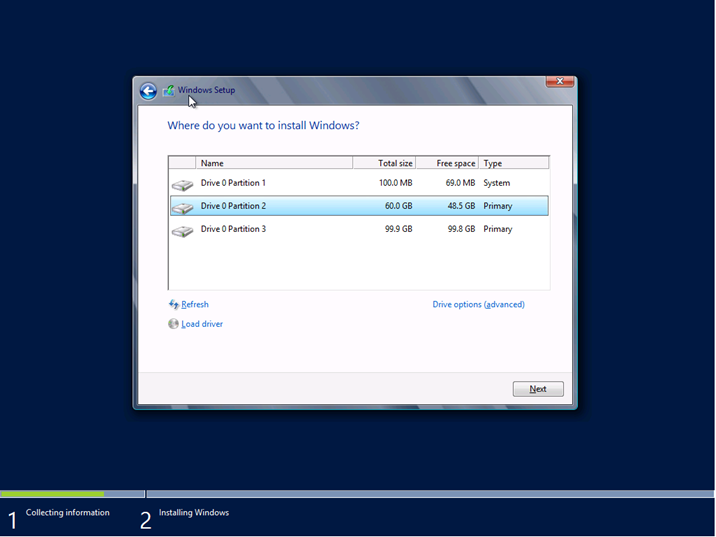 After the user specifies the partition on which to install Windows Server 2012 Essentials, setup will proceed. 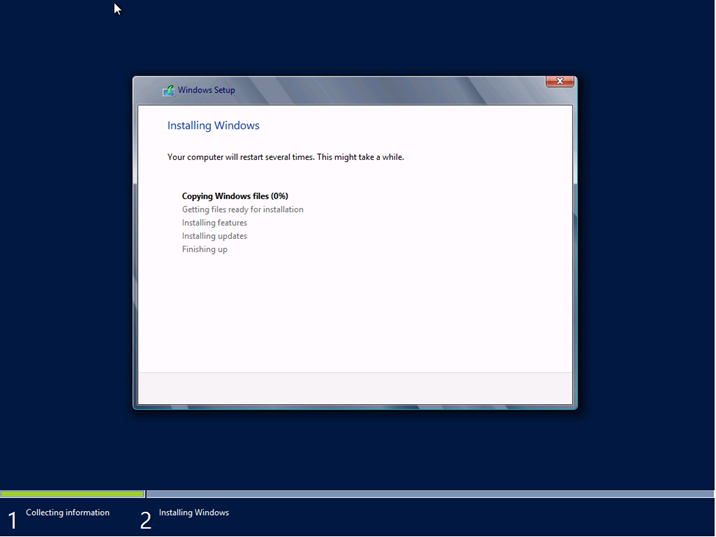 
All you need to deploy a first server


Note: You can also deploy the initial configuration stage in an unattended fashion by specifying a cfg.ini file. For more information about unattended deployment and customizations, see the Windows Server 2012 Essentials Assessment and Deployment Kit and the associated Help topic Creating and Customizing the Image .

After verifying date and time settings, Windows Server 2012 Essentials provides the option to do a clean install or server migration from an existing setup. I will only talk about clean install today, and leave migration to a future blog post. 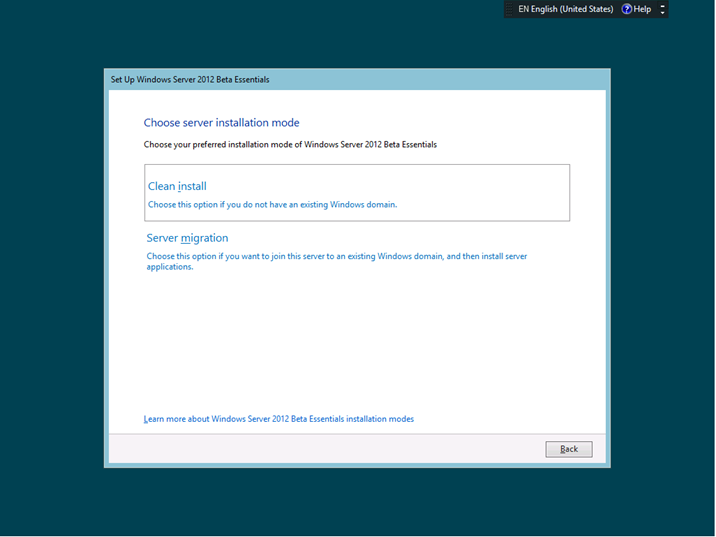 Windows Server 2012 Essentials automatically makes the server a domain controller; therefore, we ask the user for some basic information such as the domain name and the server name. 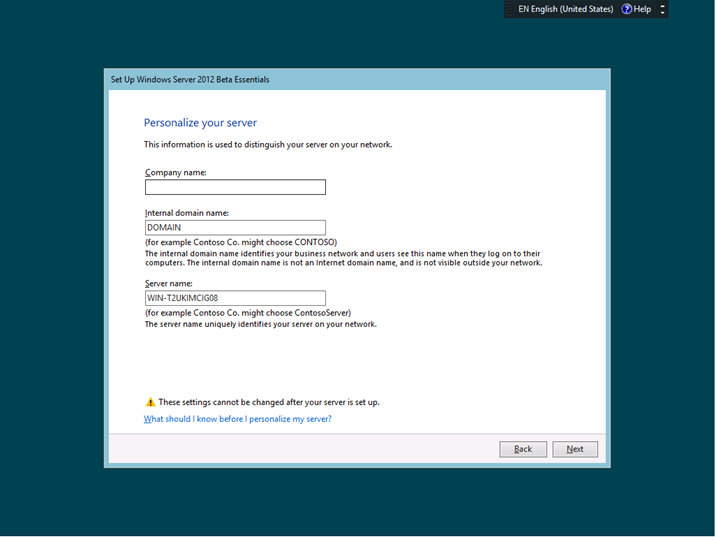 After that, we also walk the user through setting up both an administrator account and a standard user account so that the user can get up and running quickly after setup is complete. 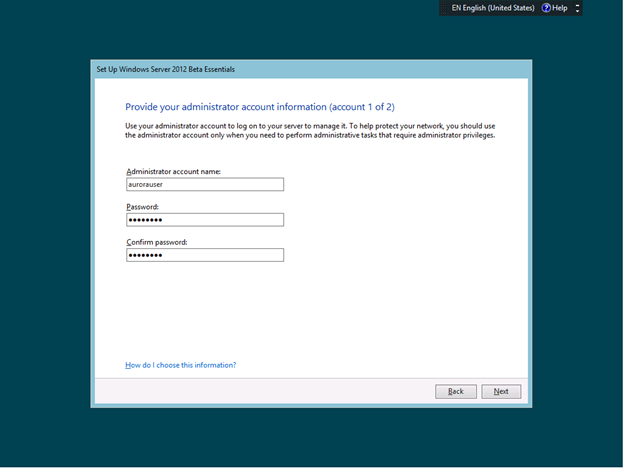 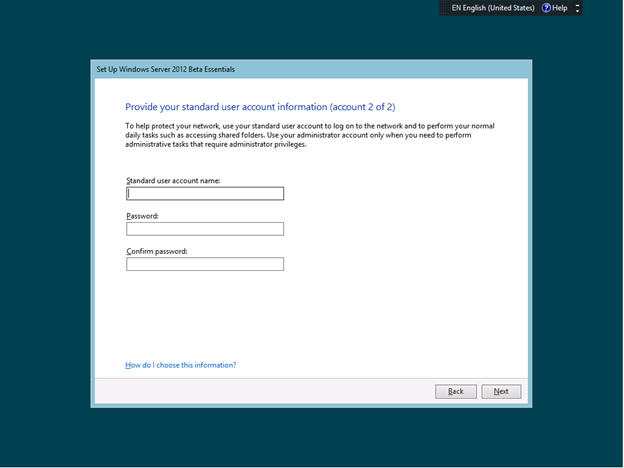 Let us keep it up to date for you

If you deployed Windows SBS 2011 Essentials in the past, you may have noticed that it deployed all critical and security updates during the initial configuration phase.

In Windows Server 2012 Essentials, we have updated the behavior so that during the initial configuration, only critical updates that are related to setup are deployed. Other updates can be installed after the server setup has been completed.

In addition, we allow the user to choose how to keep the server up to date after setup has been completed. By using recommended settings, all important and recommended updates are downloaded and installed during the server’s regular use. 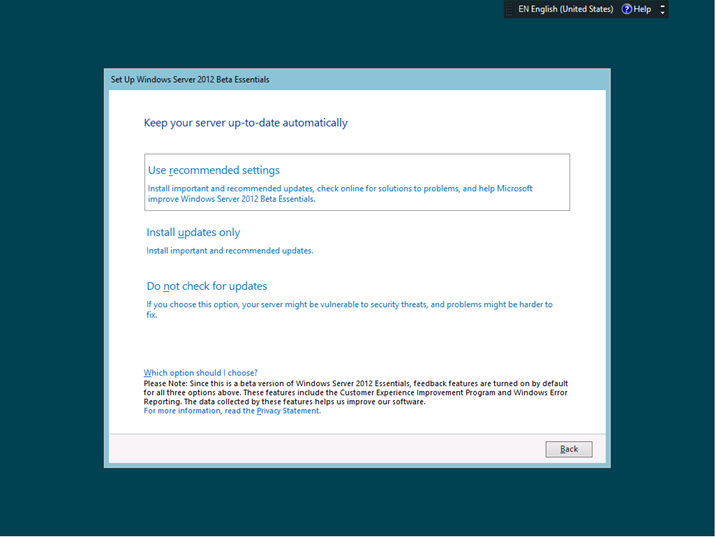 After initial configuration completes and the server is restarted, the user will see our friendly dashboard.

The user can then continue on with additional tasks such as setting up more users on the server, joining client computers to the server to have their computers managed by the server, setting up server backup, setting up Anywhere Access so that users can work with the server remotely, etc. These functionalities will be covered in future blog posts. 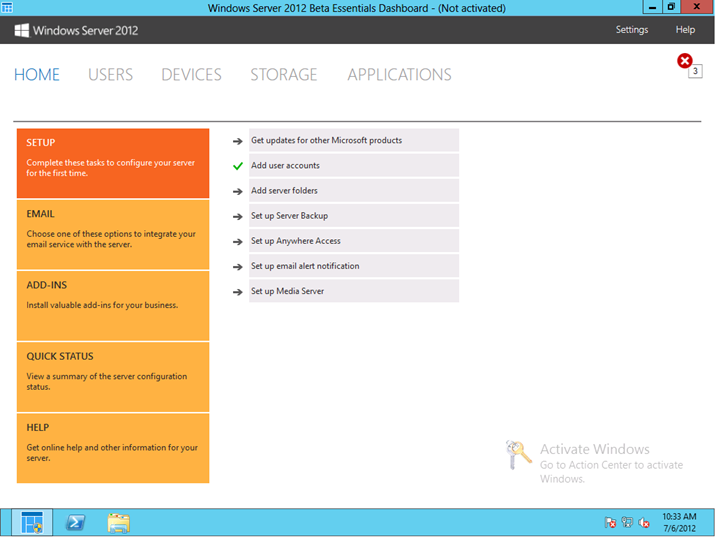