Turn on suggestions
Auto-suggest helps you quickly narrow down your search results by suggesting possible matches as you type.
Showing results for
Show  only  | Search instead for
Did you mean:
Windows MultiPoint Server 2011 and Interaction with Small Business Server 2011 Essentials
By


[Today's post comes to us courtesy of Sean Daniel ]

With yesterday’s RTM of Windows Multipoint Server 2011, I want to show how it can help your Small Business with thin clients, old clients, seasonal employees and even reducing the number of machines in the office. With this release of SBS 2011 Essentials, a new level of integration between MultiPoint and SBS 2011 Essentials is here.  MultiPoint has some features that just work well with SBS, and vice versa.  Let’s take a look at those so you know what to expect.

That’s right, MultiPoint can go straight to http://server/connect and join just as if it was a client computer.  As the MultiPoint administrator on one of the local sessions, simply browse to the server /connect page and click the Join this Windows PC.  The join is pretty seamless, which then brings us to the next point…

Once domain joined, the MultiPoint Server allows all domain users to log in as standard users to the server.  This includes local sessions or remote TS sessions.  This can essentially render the Users tab of MultiPoint useless to you, but now you can manage your users from inside the Small Business Server 2011 dashboard.

3. MultiPoint Server shows up in the SBS 2011 Essentials Server Dashboard

You can see your MultiPoint server in the dashboard, just along with your other clients, it appears online or offline depending on the state of the server. 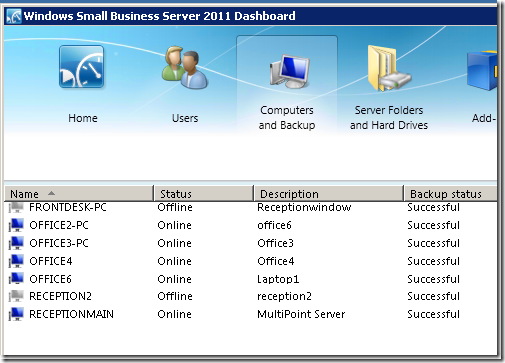 This now brings me to my next point, because you probably saw that the backup status of this MultiPoint server is Successful

5. MultiPoint appears in the Remote Web Access of SBS 2011 Essentials

Last but not least, the MultiPoint 2011 server automatically appears in the Remote Web Access for SBS 2011 Essentials, and users can connect directly to this server remotely.

Using the SBS 2011 Essentials dashboard, you can control which users have access to this computer simply on their user properties object. 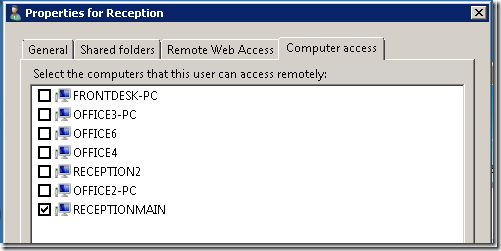 There you have it.  To learn more about MultiPoint Server itself, please visit http://www.microsoft.com/windows/multipoint/2011.aspx .