Turn on suggestions
Auto-suggest helps you quickly narrow down your search results by suggesting possible matches as you type.
Showing results for
Show  only  | Search instead for
Did you mean:
SBS 2008 and Virtualization
By


Possibly one of the most exciting topics in the market today – well perhaps not as exciting as SBS, but close!

Earlier this week we ran a special session for our partners covering the intended support details for running Windows Small Business Server 2008 in a virtual environment.  We know that as you’re planning for the future deployments of SBS it’s important to know what scenarios we’re going to be supporting and how to identify which customers could potentially be virtualized.

You can view the webcast by going here .  You’ll need to be a registered partner, but it’s a simple process to sign up.

We also thought we should share some of the details of the scenarios, and some of the common benefits of running these configurations. 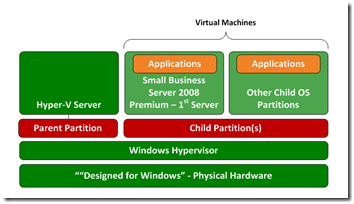 In this configuration the SBS Standard server is virtualized on a single physical server.  In this diagram we show an instance of the forthcoming Hyper-V server as the Parent Partition, but you could purchase a copy of Windows Server Standard instead.  It is not supported to deploy the SBS Standard Server as a Parent partition.

This is a great scenario for low load environments, especially if over time their hardware requirements change.

Of course there are considerations for this type of deployment.  First up the fax service is not supported.  This due to the com port requirements of the fax service, and child partitions not supporting the connection to such devices.

Secondly backup services change.  Again due to the way that child partitions present USB devices, you’ll instead need to mount the USB drive to the parent partition, and connect a newly created VHD to the child SBS Standard VM.

In this scenario a customer could use the Premium server to run as the Parent partition, with the Standard SBS server running as a child partition.  It’s worth calling out also in this example that if the Parent Partition is only supporting virtualization then that license can also be deployed a child partition to support additional roles.

The great thing about this scenario is that you can virtualize SBS premium take full advantage of the licensing and consolidate your entire environment on to one server.  Bare in mind that you’ll still need to adhere to the hardware requirements for each VM as you would if they were virtual.

Of course the same scenarios occur when it comes to backup and fax service.

In this final scenario the customer would deploy the SBS Standard Server on Physical hardware and then deploy the Premium server as the Hyper-V Host on a second physical machine.  In this scenario you maintain the physical isolation of the Standard Server and it’s services, whilst utilizing the Premium server as a virtualization parent.  In this case the same licensing applies, whereby if you only deploy virtualization services on the parent partition on the Premium server, you can then deploy that server as a child to run alternative roles for no additional licensing increment.

Finally it’s worth pointing out that we’re in the final stages of completing documentation which will be published to Technet.  Once we’ve posted it there, we’ll let you know.