Turn on suggestions
Auto-suggest helps you quickly narrow down your search results by suggesting possible matches as you type.
Showing results for
Show  only  | Search instead for
Did you mean:
Potential Issues After Installing SharePoint Foundation 2010 Security Update
By

By default, the update will be automatically approved for installation on SBS 2011 Standard. However it will still require administrative action to be installed.

As with all SharePoint Foundation 2010 updates, you must complete the update process by running psconfig after the update is installed . If your server is not yet running SP1 for Windows SharePoint Foundation and you do not run psconfig after installing this update you may encounter the issues described in http://blogs.technet.com/b/sbs/archive/2011/07/06/potential-issues-after-installing-sharepoint-... . The most common issue is that SBS backups start failing.

The symptoms and behavior are described here in more detail:

To resolve this issue you must run psconfig as described in this blog :

Since Windows SharePoint Foundation 2011, included in SBS 2011 Standard, is the first version that requires psconfig to be launched manually we expect that this is an issue that will linger for the foreseeable future.

To address this issue we have introduced a new feature in SBS 2011 UR1. SBS 2011 Standard Rollup Update 1 was released yesterday (9/15/2011) and when installed, it adds warnings in the console and the desktop that will help identify this situation and provide documentation on how to recover.

After installing the rollup, a new scheduled task will be created; this task is set to run every day at 1:15am.

This task scans the event logs to see if the SharePoint Health Monitor that is scheduled to run at 12:00am has detected a situation that requires the databases to be upgraded using psconfig.

When the issue is detected, a Domain Wide group policy that is created by the UR is enabled to show the message on logon to any Domain Admin login on to any domain workstation. When is no longer detected, the User configuration settings are disabled.

When the issue is active, this is what a domain administrator will see when logging on: 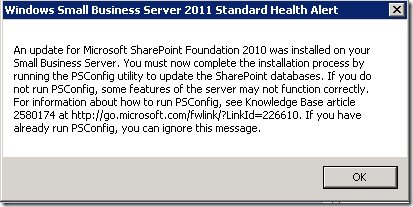 Note: this message will only be cleared after the issue is resolved and the schedule task runs again that night. If needed, you can re-run the scheduled task in Task Manager, under Microsoft\Windows\Windows Small Business Server 2011 Standard.

We also have the more traditional console alert, if configured, an email will be sent when this alert is detected.