Windows 10 has a new feature called Device Guard that gives organizations the ability to lock down devices in a way that provides advanced malware protection against new and unknown malware variants as well as Advanced Persistent Threats (APTs). Device Guard can use hardware technology and virtualization to isolate the Code Integrity (CI) decision-making function from the rest of the Windows operating system. When using virtualization-based security to isolate Code Integrity, the only way kernel memory can become executable is through a Code Integrity verification. This means that kernel memory pages can never be Writable and Executable (W+X) and executable code cannot be directly modified.

How to build compatible drivers

Since memory pages and sections can never be writable and executable, the first step is to ensure a clear separation of data and code and not to attempt to directly modify code pages.

How to verify driver compatibility

There are four steps to verify driver compatibility:


1. Use Driver Verifier with the new Code Integrity compatibility checks enabled
2. Test the driver on a system with virtualization-based isolation of Code Integrity enabled.
3. Run the HyperVisor Code Integrity Readiness Test in the Windows HLK.
4. Use the Device Guard Readiness Tool .

Driver Verifier has a new Code Integrity option flag (0x02000000) to enable extra checks that validate compliance with this feature. To enable this from the command line, use the following command:

To choose this option if using the verifier GUI, choose Create custom settings (for code developers) , choose Next , and then choose Code integrity checks .

Drivers built with older versions of Visual Studio will fail on the INIT section being WRX.  However, if this is the only issue you can ignore this issue and hit go past this in the kernel debugger as this will not cause any compatibility issues with this feature.  Forthcoming updates to driver verifier will not flag the INIT section.

Virtualization-based security is supported on Enterprise and Server editions of Windows. To enable virtualization-based protection of Code Integrity, the simplest method is to use gpedit as described below. This will turn on Hyper-V and Isolated User Mode and enable the feature: 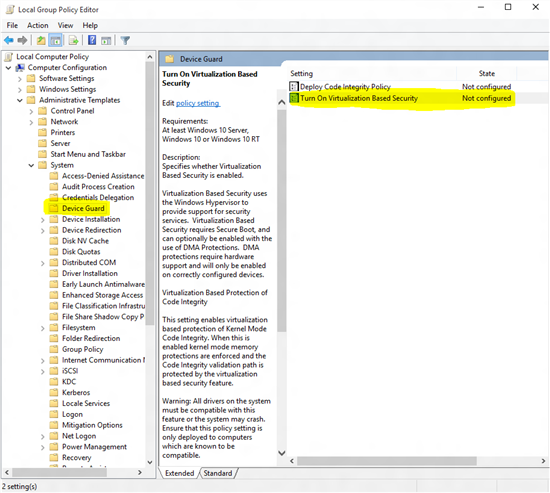 3. In the detailed configuration dialog that appears, choose Enabled , and then select Enable Virtualization Based Protection of Code Integrity 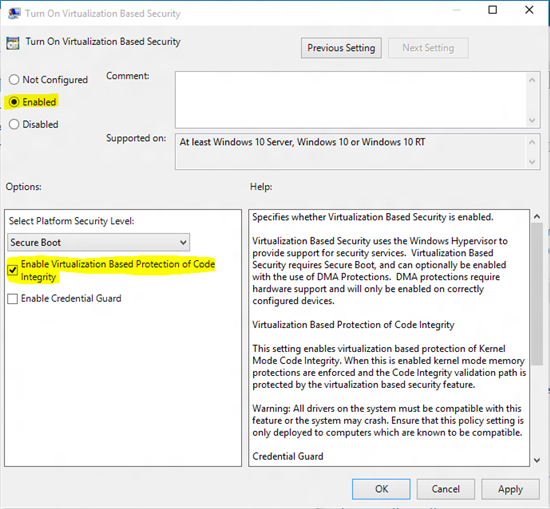 Although simply passing the HLK test is sufficient for a Microsoft signature for the driver, we strongly recommend thorough functional testing with Device Guard enabled. For example, there might be incorrectly-coded memory allocation violating NX protections causing failures that won't be caught by the test. The driver author should thoroughly test the driver while keeping Device Guard enabled.

During driver development and during HLK testing, Device Guard should be disabled, as Device Guard might prevent the driver from loading.

Windows 10 Creators Update: Enabling Device Guard Virtualization Based Protection of Code Integrity may result in a system crash during boot

What about existing drivers?  Do I need to re-build these drivers to get them to work with Windows 10?

It depends. Many drivers will already be compatible. If using standard settings with the old versions of the WDK and Visual Studio, a known issue is that the INIT section is marked as RWX. In Windows 10, however, the W will automatically be stripped, so if this is the only issue then the driver will be compatible.

How do I verify that Virtualization Based Protection of Code Integrity is enabled?

The simplest mechanism is to run the System Information app (msinfo32). Look for the following line: “Device Guard Security Services Running”. It should report: “Hypervisor enforced Code Integrity”. There is also a WMI interface for checking using management tools.

Can I verify that Virtualization Based Protection of Code Integrity is enabled programmatically from kernel in order to alter driver behavior?

The SYSTEM_CODEINTEGRITY_INFORMATION structure has a new 0x400 value exposed, indicating that virtualization based protection of Code Integrity is on.

How do I fix compatibility issues?

In addition to double checking that there are no W+X pages and the driver sections are aligned correctly as mentioned above, the most likely issue will be improper memory allocation. Information about the Code Analysis warnings related to memory allocation issued is available on MSDN on the following page:


The following MSDN links show some examples of commonly-used APIs that cause executable memory to be allocated, along with some example fixes:

Use the following table to interpret the output to determine what driver code changes are needed to resolve the different types of HVCI incompatibilities.
WarningResolution
Which APIs are potentially affected?

The following list of APIs that are not reserved for system use may be impacted: