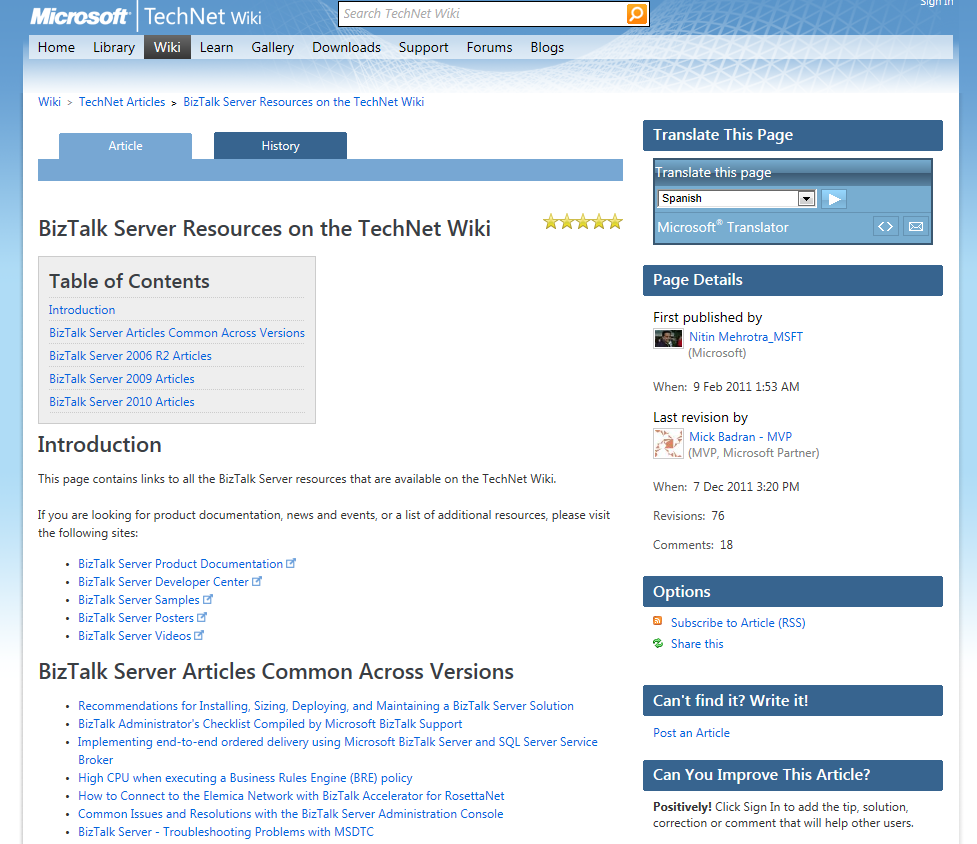 Best entry point for getting to access to all Wiki articles on BizTalk is through BizTalk Server resources on the TechNet Wiki article. It is a listed initially setup by Nitin Mehrotra from Microsoft and each new article has subsequently been added by authors themselves.Articles have mostly been written for latest three versions of BizTalk, 2006 R2 , 2009 and 2010 . According to Gartner in 2010 BizTalk Server has an installed base of more than 10,000 customers — two-thirds are estimated to be BizTalk Server 2006 Enterprise Edition or newer versions, establishing a broad base of mature and stable products with proven track records. Currently the number of customers is above 12,000 and that means that around 8,000 use 2006 or above. Therefore all the content of Wiki articles on BizTalk are extremely valuable for customers and Microsoft Partners implementing solutions on this platform. BizTalk Server will be continued to be improved and supported by Microsoft. Just recently the BizTalk Server 2010 R2 release has been announced with new improvements to product and is due six months after Windows Server 8 release. This will mean more information through TechNet Wiki and other online resources int time to come.


Wiki articles are created by people from community, Microsoft, Wiki-Ninja's, and MVP's. To name a few who have contributed one or more article's on BizTalk Server: Steef-Jan Wiggers , Trace Young , Mandi Anez Ohlinger , Nitin Mehrotra , AnandVVS , Micheal Stephenson , Mick Badran , Ed Price , Larry Franks , Wesley McSwain , Farida Bharmal , Tord Gard Nordahl and Dan Rosanova . These contributions show the dedication of Microsoft and the community for product BizTalk Server. This dedication not just shows for this product as you also will find a tremendous amount of contributions on the TechNet Wiki for other Microsoft technologies.