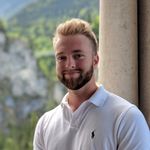 Hyper-V is Microsoft’s hardware virtualization technology that initially released with Windows Server 2008 to support server virtualization and has since become a core component of many Microsoft products and features. These features range from enhancing security to empowering developers to enabling the most compatible gaming console. Recent additions to this list include Windows Sandbox, Windows Defender Application Guard, System Guard and Advanced Threat Detection, Hyper-V Isolated-Containers, Windows Hypervisor Platform and Windows Subsystem for Linux 2. Additionally, applications using Hyper-V, such as Kubernetes for Windows and Docker Desktop, are also being introduced and improved.

As the scope of Windows virtualization has expanded to become an integral part of the operating system, many new OS capabilities have taken a dependency on Hyper-V. Consequently, this created compatibility issues with many popular third-party products that provide their own virtualization solutions, forcing users to choose between applications or losing OS functionality. Therefore, Microsoft has partnered extensively with key software vendors such as VMware, VirtualBox, and BlueStacks to provide updated solutions that directly leverage Microsoft virtualization technologies, eliminating the need for customers to make this trade-off.

Windows Sandbox is an isolated, temporary, desktop environment where you can run untrusted software without the fear of lasting impact to your PC.  Any software installed in Windows Sandbox stays only in the sandbox and cannot affect your host. Once Windows Sandbox is closed, the entire state, including files, registry changes and the installed software, are permanently deleted. Windows Sandbox is built using the same technology we developed to securely operate multi-tenant Azure services like Azure Functions and provides integration with Windows 10 and support for UI based applications. 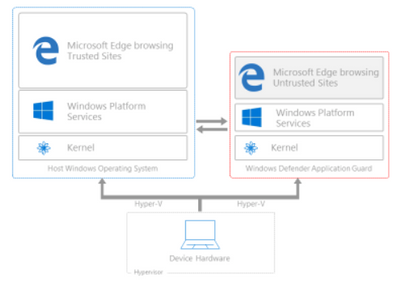 In order to protect critical resources such as the Windows authentication stack, single sign-on tokens, the Windows Hello biometric stack, and the Virtual Trusted Platform Module, a system's firmware and hardware must be trustworthy. Windows Defender System Guard reorganizes the existing Windows 10 system integrity features under one roof and sets up the next set of investments in Windows security. It's designed to make these security guarantees:

Detecting and stopping attacks that tamper with kernel-mode agents at the hypervisor level is a critical component of the unified endpoint protection platform in Microsoft Defender Advanced Threat Protection (Microsoft Defender ATP). It’s not without challenges, but the deep integration of Windows Defender Antivirus with hardware-based isolation capabilities allows the detection of artifacts of such attacks.

Hyper-V plays an important role in the container development experience on Windows 10. Since Windows containers require a tight coupling between its OS version and the host that it runs on, Hyper-V is used to encapsulate containers on Windows 10 in a transparent, lightweight virtual machine. Colloquially, we call these "Hyper-V Isolated Containers". These containers are run in VMs that have been specifically optimized for speed and efficiency when it comes to host resource usage. Hyper-V Isolated Containers most notably allow developers to develop for multiple Linux distros and Windows at the same time and are managed just like any container developer would expect as they integrate with all the same tooling (e.g. Docker).

The Windows Hypervisor Platform (WHP) adds an extended user-mode API for third-party virtualization stacks and applications to create and manage partitions at the hypervisor level, configure memory mappings for the partition, and create and control execution of virtual processors. The primary value here is that third-party virtualization software (such as VMware) can co-exist with Hyper-V and other Hyper-V based features. Virtualization-Based Security (VBS) is a recent technology that has enabled this co-existence.

WHP provides an API similar to that of Linux's KVM and macOS's Hypervisor Framework, and is currently leveraged on projects by QEMU and VMware. 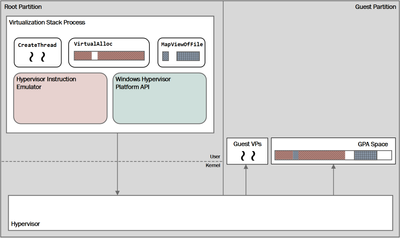 This diagram provides a high-level overview of a third-party architecture.

WSL 2 is the newest version of the architecture that powers the Windows Subsystem for Linux to run ELF64 Linux binaries on Windows. Its feature updates include increased file system performance as well as added full system call compatibility. This new architecture changes how these Linux binaries interact with Windows and your computer’s hardware, but still provides the same user experience as in WSL 1 (the current widely available version). The main difference being that WSL 2 uses a new architecture, which is primarily running a true Linux kernel inside a virtual machine. Individual Linux distros can be run either as a WSL 1 distro, or as a WSL 2 distro, can be upgraded or downgraded at any time, and can run WSL 1 and WSL 2 distros side by side.

Kubernetes started officially supporting Windows Server in production with the release of Kubernetes version 1.14 (in March 2019). Windows-based applications constitute a large portion of the workloads in many organizations. Windows containers provide a modern way for these Windows applications to use DevOps processes and cloud native patterns. Kubernetes has become the de facto standard for container orchestration; hence this support enables a vast ecosystem of Windows applications to not only leverage the power of Kubernetes, but also to leverage the robust and growing ecosystem surrounding it. Organizations with investments in both Windows-based applications and Linux-based applications no longer need to look for separate orchestrators to manage their workloads, leading to increased operational efficiencies across their deployments. The engineering that supported this release relied upon open source and community led approaches that originally brought Windows Server containers to Windows Server 2016.

These components and tools have allowed Microsoft’s Hyper-V technology to introduce new ways of enabling customer experiences. Windows Sandbox, Windows Defender Application Guard, System Guard and Advanced Threat Detection, Hyper-V Isolated-Containers, Windows Hypervisor Platform and Windows Subsystem for Linux 2 are all new Hyper-V components that ensure the security and flexibility customers should expect from Windows. The coordination of applications using Hyper-V, such as Kubernetes for Windows and Docker Desktop also represent Microsoft’s dedication to customer needs, which will continue to stand for our main sentiment going forward.