A new speculative execution side channel vulnerability was announced recently that affects a range of Intel Core and Intel Xeon processors. This vulnerability, referred to as L1 Terminal Fault (L1TF) and assigned CVE 2018-3646 for hypervisors, can be used for a range of attacks across isolation boundaries, including intra-OS attacks from user-mode to kernel-mode as well as inter-VM attacks. Due to the nature of this vulnerability, creating a robust, inter-VM mitigation that doesn’t significantly degrade performance is particularly challenging.

For Hyper-V, we have developed a comprehensive mitigation to this attack that we call HyperClear. This mitigation is in-use by Microsoft Azure and is available in Windows Server 2016 and later. The HyperClear mitigation continues to allow for safe use of SMT (hyper-threading) with VMs and, based on our observations of deploying this mitigation in Microsoft Azure, HyperClear has shown to have relatively negligible performance impact.

We have already shared the details of HyperClear with industry partners. Since we have received questions as to how we are able to mitigate the L1TF vulnerability without compromising performance, we wanted to broadly share a technical overview of the HyperClear mitigation and how it mitigates L1TF speculative execution side channel attacks across VMs.


As documented here , the fundamental premise of the L1TF vulnerability is that it allows a virtual machine running on a processor core to observe any data in the L1 data cache on that core.


To mitigate the L1TF vulnerability in the context of inter-VM isolation, the most straightforward mitigation involves two key components:


The L1TF mitigation for Hyper-V prior to Windows Server 2016 employs a mitigation based on these components. However, this basic mitigation has the major downside that SMT must be disabled, which can significantly reduce the overall performance of a system. Furthermore, this mitigation can result in a very high rate of L1 data cache flushes since the hypervisor may switch a thread between the guest and hypervisor contexts many thousands of times a second. These frequent cache flushes can also degrade the performance of the system.

With the Core Scheduler, a VM can safely take advantage of SMT (Hyper-Threading). When a VM is using SMT, the hypervisor scheduling allows the VM to use all the SMT threads of a core at the same time.

Thus, the Core Scheduler provides the essential protection that a VM’s data won’t be directly disclosed across sibling SMT threads. It protects against cross-thread data exposure of a VM since two different VMs never run simultaneously on different threads of the same core.

However, the Core Scheduler alone is not sufficient to protect against all forms of sensitive data leakage across SMT threads. There is still the risk that hypervisor data could be leaked across sibling SMT threads.

One potential mitigation to this problem is to coordinate hypervisor entry and exit across SMT threads of the same core. While this is effective in mitigating the information disclosure risk, this can significantly degrade performance. 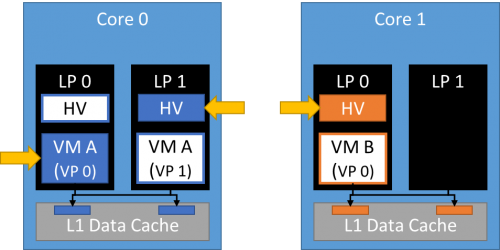 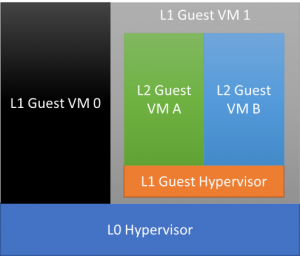 
By using a combination of core scheduling, address space isolation, and data clearing, Hyper-V HyperClear is able to mitigate the L1TF speculative execution side channel attack across VMs with negligible performance impact and with full support of SMT.
3 Likes
Like