Turn on suggestions
Auto-suggest helps you quickly narrow down your search results by suggesting possible matches as you type.
Showing results for
Show  only  | Search instead for
Did you mean:
Troubleshooting Workflow Performance and Delays
By

This blog post will describe how to troubleshoot Service Manager to figure out if workflows are not keeping pace with the transaction volume happening in the database.  This problem would manifest itself as when an update to the database happens such as creating or updating an incident and then a notification or workflow that is supposed to be triggered by that update doesn't happen for several minutes, hours, or even days in really bad situations.

Notice how the DataSource uses the …CmdbInstanceSubscription.DataSourceModule.  That module is implemented in the SCSM code base to take the input defined in the <Subscription> part of the XML here and query the database accordingly.  This particular rule is configured as an ‘InstanceSubscription’.  In SCSM parlance an instance is same as saying an ‘object’.  An example of an object (or ‘instance’) is a particular incident or a particular computer.  This particular subscription is looking for instances of the class (aka ‘type’) System.WorkItem.Incident (which is represented by the GUID ‘a604…).  This criteria is also looking for new incidents that are added (see ‘AddInstance’ above).  If you are subscribing for an update to an existing incident then the criteria would say ‘UpdateInstance’ instead of ‘AddInstance’.  Lastly, you can see that this particular rule has a polling interval of 60 seconds and a batch size of 100.  What that means is that every 60 seconds this rule will query the database looking for objects that meet the criteria.  If it finds more than 100 then it will pass the oldest 100 to the write action part of the module for processing (in this case sending a notification).  The remainder will be processed the next time the workflow runs.  This batch size ensures that we don’t totally bog down the system by passing too many objects through at a time to the write action module to be acted upon.

Now, let’s assume that at the rule ran at 11:04:40.  In between 11:04:40 and 11:05:40 when it is scheduled to run next, 125 incidents are created.  When the rule runs at 11:05:40 it will process 100 of those 125 new incident leaving 25 incidents to be processed the next time the rule runs.  If it was sort of a fluke that 125 incidents were created in that minute, then it won’t be a problem.  The next time the rule runs at 11:06:40, it will catch up by processing those remaining 25 incidents and however many incidents that were created between 11:05:40 and 11:06:40.  However, if you have a situation where 125 incidents are being created every minute, then the backlog of the number of incidents that need to be processed will start to increase.  The longer that the situation happens where you have more incidents being created every minute than are processed each minute, the longer the delay comes between when an incident is created and when it is notified about!

Every transaction has an ID (EntityTransactionLogID), a discovery source (identifies either the user or other data source like a connector that triggered the update), and a time stamp (TimeAdded).

Now that you have an understanding of how the system works, we can learn how to troubleshoot workflow performance problems.  There are some situations where these subscription rules start to fall behind:

Again, the symptom of workflows falling behind is typically one of the following:

Note : This query and all the others in this blog post can be downloaded from here: 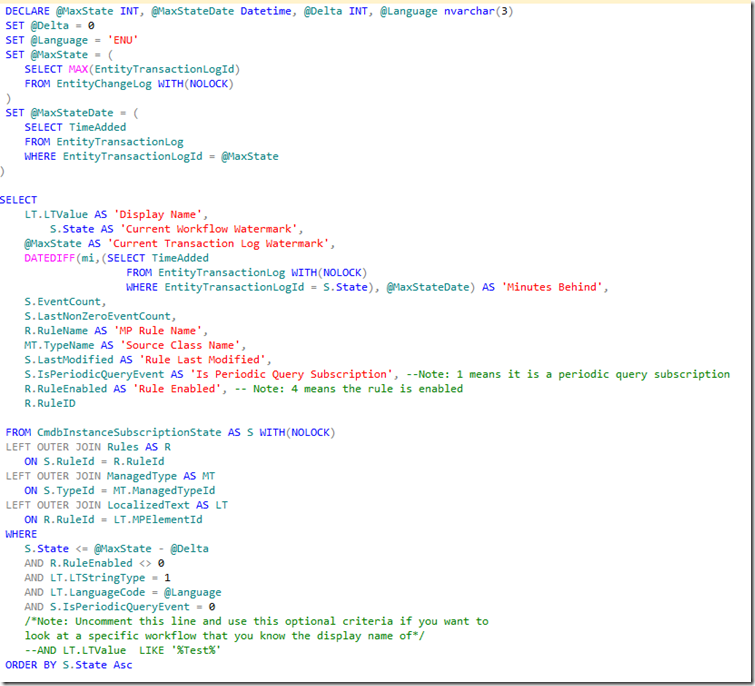 You have a problem if the delta between the Current Workflow Watermark and the Current Transaction Log Watermark is very large.  The delta size will vary depending on how busy your Service Manager installation is.  If you have a lot of people using Service Manager hundreds or even thousands of transactions can happen every minute.  A more transaction-volume-independent way to see if you have a problem or not is to look at the Minutes Behind column.  If that number is significantly larger than the polling interval for that rule you have a problem.  You really have a problem if the watermark delta and/or the number of minutes behind is increasing over time for a given rule.

Before we go on, let me explain some of the parameters of the query above.  The @Delta parameter allows you to filter out those rules which have a watermark delta less than the @Delta parameter.  For example, in the default query the value is set to 100.  Only those rules that have a watermark delta (the different between the Current Workflow Watermark and the Current Transaction Log Watermark) greater than the @Delta value will be shown.  In the query I ran to get the results above, I set the value to zero so that it would show all of the rules.  The @Language parameter allows you to choose which language to display the display name of the rule in.  You can get the language codes by looking at this blog post .  Note: if you want to look at a particular rule and you know the display name or part of the display name of it you can uncomment the comment at the end and provide the display name to filter it down to just that rule (or rules that match the LIKE criteria).

Now, let’s say that you have identified a rule (or rules) that are falling behind.  What do you do now?  This is the order of how I would troubleshoot this:

1) Look at the hardware first.  Are you using at least the minimum recommended hardware for the ServiceManager database server?  If you have a very busy/large scale Service Manager installation are you using significantly more than the recommended hardware?  Have a look at the performance of the SQL Server.  Is the _Total processor consistently busy more than 50% of the time?  Is there at least some available RAM on the SQL Server?  What do the disks look like?

2) Look at the Operations Manager event log on the SCSM management server where the workflows are running.  You may see some events like this:

One or more subscriptions were affected by this.

3) Take a look at the configuration of the Rule.  To do this you need to figure out what management pack the rule is in.  First, get the RuleID GUID from the query above for the rule that is apparently having a problem.  Then use the RuleID GUID in this query:

SELECT * FROM Rules WHERE RuleId = ‘<the RuleID GUID>’

This will give you two things you need: the RuleName and the ManagementPackID. For example:

Now grab the ManagementPackID and use it in this query:

This will convert the MP XML stored in the database into an temporary XML file:

Now, just click the link in the Results tab and it will open the temporary XML file for you in SQL Management Studio as another document tab.  For example: 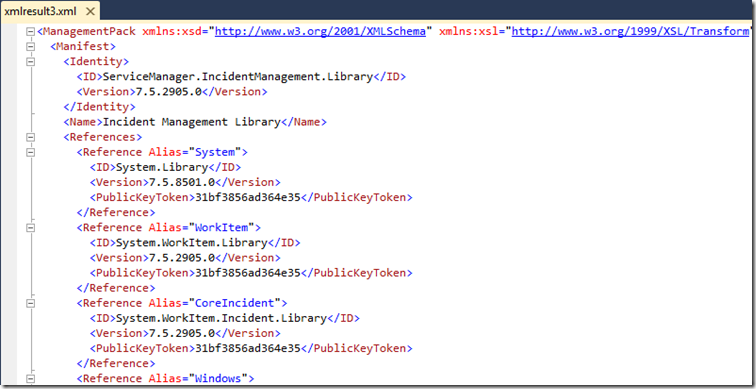 Now, take the RuleName that you found above in the Rules table query (e.g. ‘Incident_Desired_Configuration_…) and use Find (CTRL+F) to find that rule in the XML document.  For example:

A few things to check here:

If the workflows are hopelessly behind and you want them to catch up immediately, you can update the State column on the CmdbInstanceSubscriptionState table by running this query:

Keep in mind that running this query will move the watermark forward.  Any transactions that would have triggered the subscription criteria and any resulting actions (notifications, workflows, etc) for those transactions that are being skipped over WILL NOT HAPPEN .  Be very careful using this update query.  Also, keep in mind that the EntityChangeLog table has a grooming routine that grooms rows from that table which are no longer needed.  One of the criteria for determining whether or not a row is needed is the position of the watermarks for the workflows.  We recommend slowly moving up the watermark so as not to trigger a massive grooming job that would slow down the overall system.  We also recommend moving the watermark during non-peak hours in order to minimize the impact of grooming on people using the system.

Hopefully, this gives you some tools to help investigate why subscriptions are not being triggered (apparently) or are taking a long time to be triggered.

This is an advanced topic and refers to the last bullet point in the possible causes section above.  To give an example of this problem, assume that there are 10,000 incidents that are assigned to Bob Jones.  The WorkItemAssignedToUser relationship type has Source = System.WorkItem and Target = System.User.  The MaxCardinality of the Target end of the relationship type is 1 meaning that only one user can be assigned to each work item.  Unless this relationship type is excluded from subscription queries, an update to Bob will be treated as an update to the 10,000 incidents that are assigned to him.  In this case, it doesn't really make sense to have all of the incidents be treated as updated just because Bob was updated.  Thus, we want to exclude these updates.  In other cases such as a Windows computer object being related to a physical computer object it does make sense.  If the physical computer object is updated we should treat it as an update to the Windows computer object.  Thus, with any custom relationship type where there is a Target with MaxCardinality = 1 where you will be subscribing to the Source objects, you need to decide if the relationship type should be included or excluded in determining whether or not the Source object is updated.

Now, use that watermark range (e.g. 1204988 –> 1232787) in the following query to look for updates where there is a large number of related objects that are treated as updated when a target object is updated.  These related object changes are stored in the RelatedEntityChangeLog table (or RECL for short).