Hi, Donovan Vanhaltren here with a tip on an issue you might see when migrating VMs from Windows Server 2008 R2 in System Center 2012 Virtual Machine Manager Service Pack 1.  When trying to migrate virtual machines created on Windows Server 2008R2 hosts to Windows Server 2012 hosts using VMM 2012 SP1, you may see the following error: 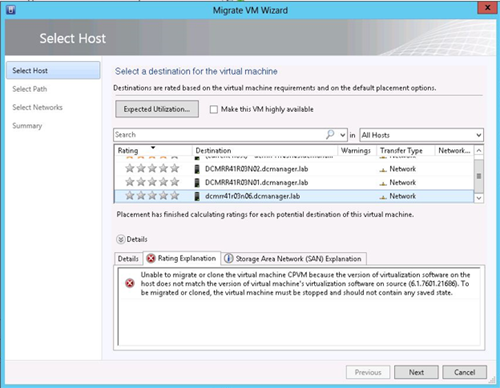 What does this mean? VMs store state information in 2 ways:

1. If a VM is running, and the user selects to “Save State” the VM, then the state of the memory and disks of the VM are stored, and the VM is powered off.

2. If a VM is running and the user selects to create a Checkpoint/Snapshot of the VM, in this case as well the state of the memory and disks are stored.

How do we proceed?

Note: This issue has already been fixed in Update Rollup 1 for System Center 2012 Service Pack 1 which can be found here:

The update can also be downloaded from Windows Update.

This update provides the user with a warning, indicating that all state information will be deleted automatically when migrating the VM and proceeds with the migration.

How do we proceed - Workaround?

If for some reason, you cannot or do not want to install the Update Rollup 1, the following workaround can be done:

Running VMs : This is a relatively easy fix. If the VM is powered off or shut down then a migration is possible if the VM does not have state information.

WORKAROUND: VMM provides more information on the VMs snapshots than Hyper-V. To view the checkpoints on a VM in VMM, select the VM and click the “Manage Checkpoints” button on the toolbar. The UI will show the following screen: 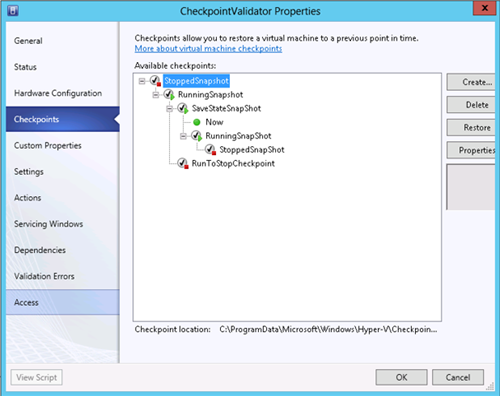 Note that each checkpoint has a small icon at the side of its name: This icon will help determine which checkpoints need to be deleted (Checkpoints with State information):

From this view the user has 2 options:

1. Directly remove all the checkpoints that have state information. This is relatively simple and the user would just need to remove all checkpoints with the “Running” Icon.

2. Preserve the Checkpoint information but delete the state information on the checkpoint. This is a more cumbersome process and would entail the following:

a. Restore the checkpoint in question.

b. Stop the VM

Icon. In the end, the Checkpoints screen should NOT contain any checkpoint with the “Running” Icon. Once this is done, the VM should be available for migration from VMM.

This issue is applies regardless of the ‘Availability’ property of the VM, meaning that HAVMs and non-HAVMs would be treated alike. Since the VM is first exported from the source and then imported into the destination, the HA property is not considered.

This workaround should work the same way for the following scenarios as well: