Turn on suggestions
Auto-suggest helps you quickly narrow down your search results by suggesting possible matches as you type.
Showing results for
Show  only  | Search instead for
Did you mean:
Service Management Automation: Integration with Orchestrator
By


Service Management Automation (SMA) is a capability in Windows Azure Pack and Orchestrator 2012 R2. Though SMA and Orchestrator are both built for IT process automation, orchestration, and integration, they are in many ways complimentary in their capabilities and use scenarios ( see this post for a discussion of SMA versus Orchestrator ). In general, SMA is optimal for use in Microsoft Cloud OS environments, while Orchestrator is best in traditional datacenter environments. IT groups that are moving some of their traditional workloads to the cloud may find it useful to leverage both SMA and Orchestrator; in this case, it may be common for some end-to-end processes to extend from SMA to Orchestrator and vice-versa.


Other useful posts on how to call Orchestrator from an SMA runbook by Tiander Turpijn should also be read: see Calling an Orchestrator Runbook from SMA Part 1 and Part 2 .

PowerShell Modules for Integration with SMA and Orchestrator


To simplify integration with SMA and Orchestrator we have created PowerShell modules with cmdlets that expose the key functionality available via the respective OData web services.


The next two images show the cmdlets available in each module. 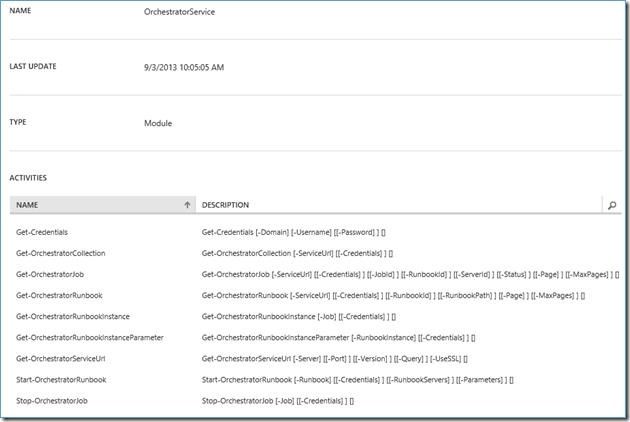 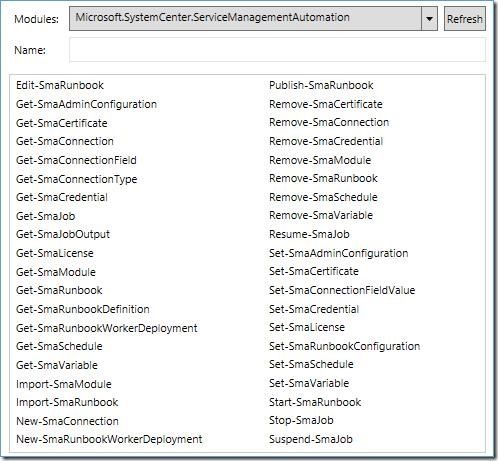 
There are a few key steps you will need to take in any SMA runbook that calls an Orchestrator runbook; these steps are the following:

Let’s take a look at each section in more detail. For illustration, we will look at the PowerShell workflow code from an SMA runbook called Start-ScoRunbook.  In the box below is the entire runbook script (also you can click here to DOWNLOAD the runbook and then import it to SMA). 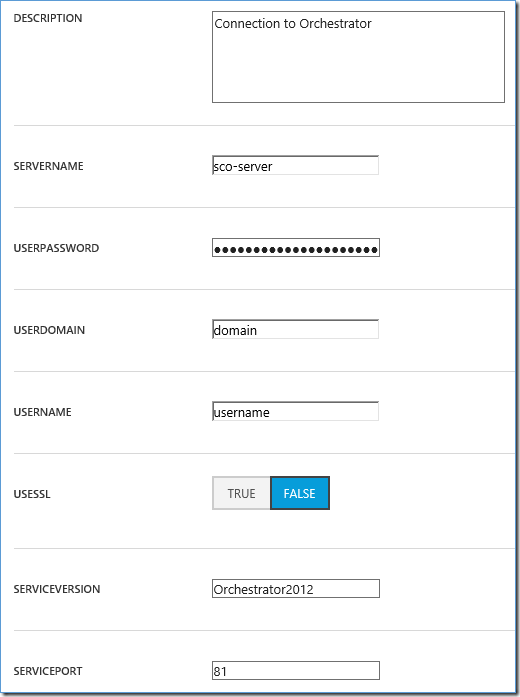 The Get-AutomationConnection activity that is installed with SMA is used to retrieve the connection object. From that connection object we extract the UserDomain, UserName, and UserPassword fields that we use to create the credential object that will be used for authorization with Orchestrator. We also extract the ServerName that the Get-OrchestratorServiceUrl cmdlet used to create the full URL to the Orchestrator web service. With the URL, the credentials, and the runbook path we then get the Orchestrator runbook object using the Get-OrchestratorRunbook cmdlet.


Monitor the Orchestrator job for completion and get any output


If Start-OrchestratorRunbook is successful, then it returns the Orchestrator job object. The next step is to monitor the job for completion and then get any output: the getJobOutput function performs this work.


To monitor a job and determine if it has completed we use the Get-OrchestratorJob cmdlet and wait until the job status is not Running or Pending. Note that the sleep interval is configurable: you will want to make this number greater than the expected job run time. If the job is not one of these states, then it has reached a final state and we can attempt to get the runbook instance associated with the job, from which we can extract any runbook instance parameter that has the Direction metadata equal to Out (which contain the runbook output). If there are output parameters then we package them in a hashtable and return it.


The key logic in an Orchestrator runbook that calls an SMA runbook is quite similar to that discussed above.


The main difference between this runbook and that discussed in the previous section is that this Orchestrator runbook will contain all of the core logic in a PowerShell script that uses the SMA PowerShell module. This script will be contained in an Orchestrator Run .Net Script activity ( click here to DOWNLOAD the script ). Because the SMA PowerShell module requires a 64-bit PowerShell process to run, and Orchestrator is constrained to a 32-bit process, the script uses PowerShell remoting to run the SMA cmdlets on the 64-bit Windows server where the ServiceManagementAutomation module is installed. Remember to run “Set-ExecutionPolicy RemoteSigned” in the PowerShell console on the remote machine so that the remoting is allowed.


This next screenshot shows a simple Orchestrator runbook that takes in input parameters, uses the Run .Net Script activity to run the script that calls SMA, and then returns any output. In general, your runbooks will be more complex than this, however the key logic for integrating with SMA will be contained in the single Run .Net Script activity. 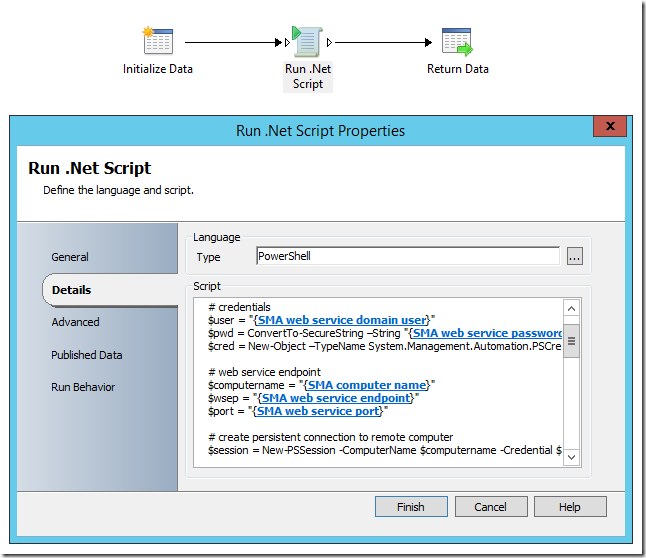 For the connection and credential values in the script you will probably want to use variables stored in Orchestrator Global Settings so that this connection information can be re-used in many runbooks. 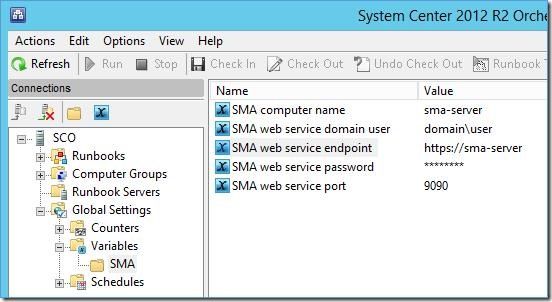 The PowerShell script for starting an SMA runbook, monitoring the job, and getting return data


In the box below you can see the entire script. This script was first authored and tested in the PowerShell ISE and then pasted into the Run .Net Script activity.


In the first part of the script the credential and connection objects are created. Then a connection session is created to the remote server.


The key part of the script occurs next when we use the Invoke-Command cmdlet to execute a script block in a PowerShell session on the remote computer. Parameters are passed into the script block using the –ArgumentList parameter.


Within the script block the SMA runbook is started using the Start-SmaRunbook cmdlet, and parameters are passed to it in a hashtable object.


A job id is returned from the Start-SmaRunbook cmdlet, and this job id is used to monitor the job using the Get-SmaJob cmdlet. When the job status has reached a final state, then we use the StreamText property in the objects returned from Get-SmaJobOutput to get any output. Note that in this example we don’t check that the final state is actually “Completed”, so you will want to add logic to handle cases where the runbook is in some other state.


Also note that the Get-SmaJob cmdlet in a single collection and does not guarantee that the order of records returned is chronological. If you want them in chronological order then PowerShell script like this can help:


To get the output from the script into the Orchestrator databus where it can be used by other activities in the Orchestrator runbook, we configure the Run .Net Script activity Published Data to put the contents of the script “out” variable into the databus property named “Return from SMA”. 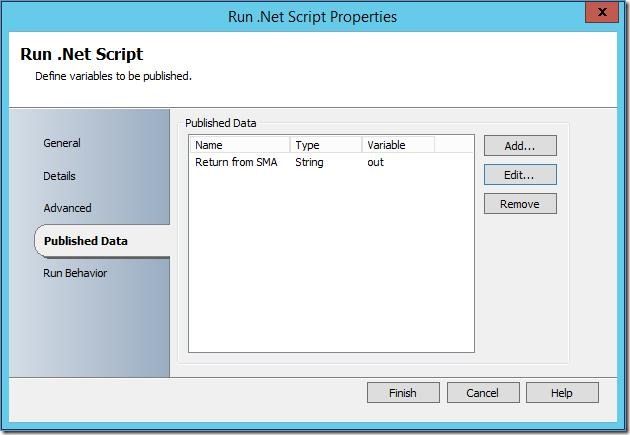 
As you can see, once you understand the mechanics of connecting between SMA and Orchestrator, starting runbooks, monitoring jobs, and getting output data, the goal of creating end-to-end processes is relatively straightforward. Go ahead and write a simple runbook in SMA that calls Orchestrator, and vice-versa; from those experiments you should be able to get a good baseline of understanding from which you can build more complex scenarios.