The VMM 2008 R2 SP1 RC has been available for about a week now and hopefully you’ve had a chance to download it. If not, jump over to Microsoft Connect and search for SCVMM and get your download started in the background while you read this walkthrough of what’s new in VMM 2008 R2 SP1.

Along with the basic support for Windows Server 2008 R2 SP1, we’re also adding new settings to allow you to take advantage of the key new features of SP1: dynamic memory and RemoteFX.

You can use the full product package we’re releasing to upgrade an existing installation or install from scratch.

New installation is nearly identical to the process for installing VMM 2008 R2.

If you’re updating an existing installation it’s important to upgrade all components to VMM 2008 R2 SP1 at the same time. You must update the VMM Server, Admin Console, Self Service Portal and the VMM MP for Operations Manager all together. For example you can’t connect a non-SP1 VMM Admin console with a SP1 VMM Server.

Remember to backup your database first since we do make changes to the DB as part of the upgrade process!

The Windows Virtualization Team blog is a great resource for information on Dynamic Memory support in Hyper-V.

SC VMM 2008 R2 SP1 adds settings to the VM, HW profile and template properties to configure DM in the same way as you do through the Hyper-V manager. 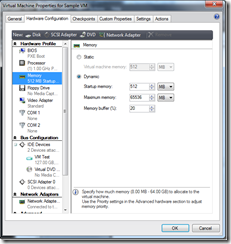 We’ve also added the current memory consumption, memory demand and memory status of the guest as properties of the VM object. These properties can be viewed as columns on the VM view in the Administrators console or through PowerShell.

We’ve also made the necessary changes to Intelligent Placement to take dynamic memory into account when doing a deployment or migration. Placement checks to make sure the destination is a SP1 host and can support dynamic memory if it is enabled on the VM.

Specifies, in megabytes (MB), the maximum amount of memory that can be allocated to a virtual machine if dynamic memory is enabled. The default value is 65536.

Specifies the percentage of memory above a virtual machine’s current memory allocation which the host should try to reserve as a buffer.  The default value is 20.

RemoteFX allows you to provide a rich desktop environment through a virtual machine, but in order for it to work you have to meet some very specific software and hardware requirements.  Before you begin using RemoteFX in SCVMM I would recommend you first read up on RemoteFX on Technet so you fully understand these requirements.

We’ve added a new Video Adapter panel to the hardware properties of a VM. The new video adapter panel contains all of the options necessary for configuring RemoteFX on the VM, including the number of monitors and the resolution. 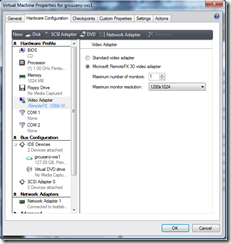 On the Host side we’ve added GPU information (adapter name, total memory, and available memory) to the host object. We display this in a new GPUs section of the host hardware properties.

Of course we’ve also updated the Intelligent Placement algorithm to check for the necessary hardware and software requirements if the VM you are placing has RemoteFX turned on. In particular we check for the presence of SP1 on the host, the RemoteFX role service (under Remote Desktop Services),  a CPU that has SLAT extensions, and enough GPU memory on a compatible GPU on the host.

Specifies the maximum number of monitors supported by the RemoteFX 3D Video Adapter when enabled.

Specifies, as a string, the value that represents the maximum possible monitor resolution of the RemoteFX 3D Video Adapter when enabled.

Once your download is complete, give it a try in your lab environment and let us know what you think.  Feel free to submit feedback through connect or ask questions on the VMM forums.