Turn on suggestions
Auto-suggest helps you quickly narrow down your search results by suggesting possible matches as you type.
Showing results for
Show  only  | Search instead for
Did you mean:
Orchestrator Quick Tip: Setting Environment Variables in CLI Activities
By

When creating activities, you can specify parameters that appear on the activity’s properties tab. When using PowerShell as the “mode” of the activity, the wizard lets you select a “usage mode” for the parameter as either “Command Argument” or “Environment Variable”. Unfortunately, there’s a bug in the code behind that wizard where the environment variable parameters are not being set in the environment. However, there’s a simple workaround – PowerShell itself!

When you would have used “Environment Variable”, just use “Command Argument” instead, and then in the front of your PowerShell command line, set the environment variable like this: 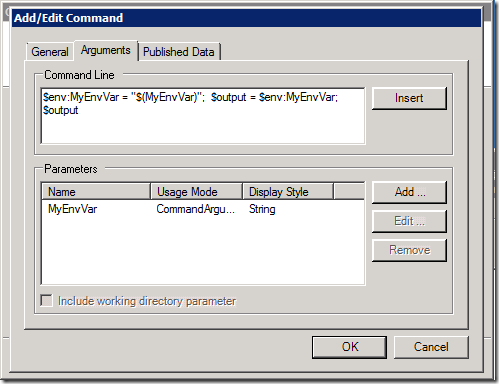 Here’s the command I used:

So, a simple workaround to an issue that might have bugged a few people…