Turn on suggestions
Auto-suggest helps you quickly narrow down your search results by suggesting possible matches as you type.
Showing results for
Show  only  | Search instead for
Did you mean:
Introducing Service Management Automation ISE add-on
By

First published on TECHNET on Apr 28, 2016
A few months ago, Azure Automation team released a new runbook authoring experience through Azure Automation ISE Add-on. Announcing the add-on , Joe outlined the customer behaviors that inspired them to build the add-on.

We realized that these observations hold true for our System Center Service Management Automation (SMA) customers as well. We saw an opportunity to provide our customers with a seamless runbook authoring experience by providing a similar add-on for SMA. Today, we are happy to announce the release of Service Management Automation ISE Add-on to go with release of System Center Technical Preview 5 .

With this release, we provide our users with an authoring experience better suited to their needs and also consistent with our cloud automation offerings.
This blog will walk you through the installation and usage of Service Management Automation ISE Add-on.

If you would instead like to watch a video demonstrating the new ISE Add-on, here it is:


You can install the ISE Add-on module from PowerShell Gallery with:
> Install-Module SMAAuthoringToolkit -Scope CurrentUser

Then, if you want the PowerShell ISE to always automatically load the add-on, run:
> Install-SMAIseAddOn

Otherwise, whenever you want to load the add-on, just run the following in the PowerShell ISE:
> Import-Module SMAAuthoringToolkit


When you load the add-on, it will appear on the right-hand side of the PowerShell ISE. 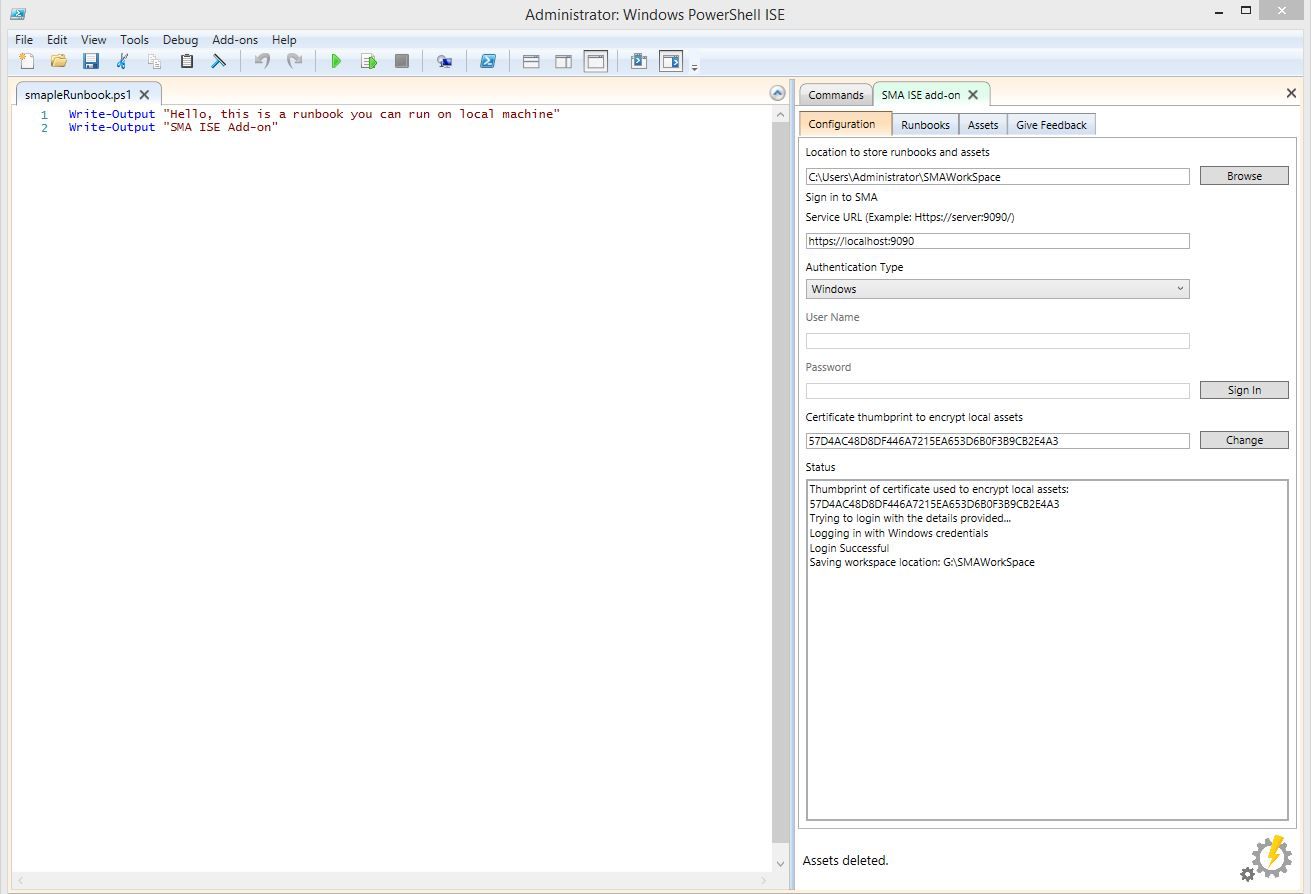 You can use it to view, edit and test the runbooks in your SMA Account; also to manage your Automation assets.

The Configuration tab (pictured above) is where you sign in to SMA. Its runbooks and assets are downloaded to the workspace folder specified at the top of this tab. For security, secret asset values (like encrypted variables and credential passwords) are not downloaded, but can be manually entered and securely stored locally – more details on that later.


How does it work?


You will be able to connect to your SMA Web Server in the configuration, you can either use Windows/Basic authentication mechanism. 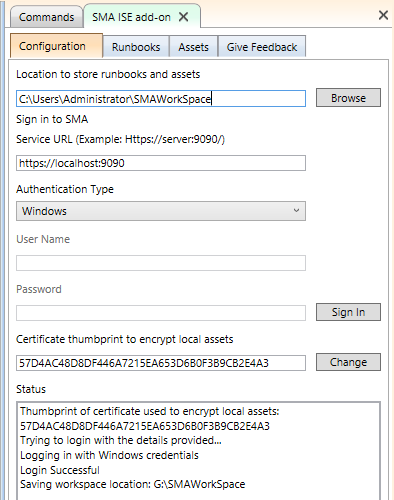 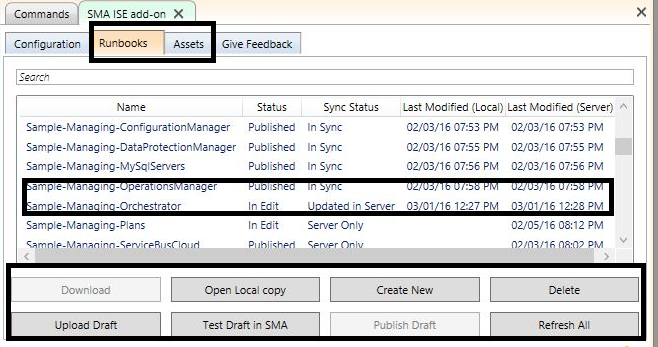 Test runbooks on your local machine

Once you’ve done some local testing, you can also test your runbook in SMA without leaving the ISE experience. For example: 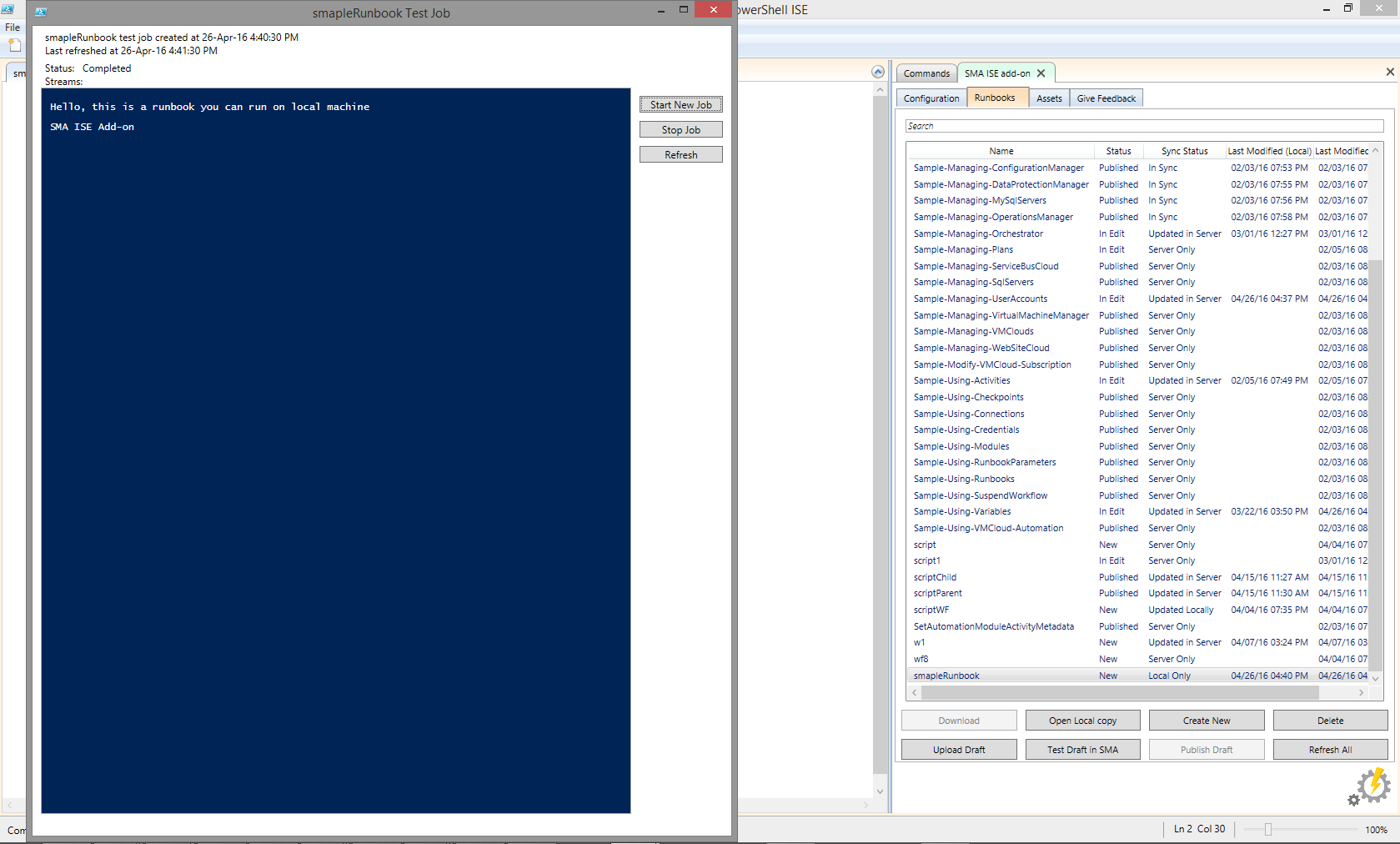 The new window shows information about a test job running in SMA for this runbook. It’s the PowerShell ISE’s equivalent to the Test Job pane in Windows Azure Pack (WAP) Automation.


As mentioned above, secrets will still need to be entered manually. You can enter these values from the Assets Tab. Assets missing values, such as an encrypted variable or a credential’s password field, will be highlighted in orange, as shown below. 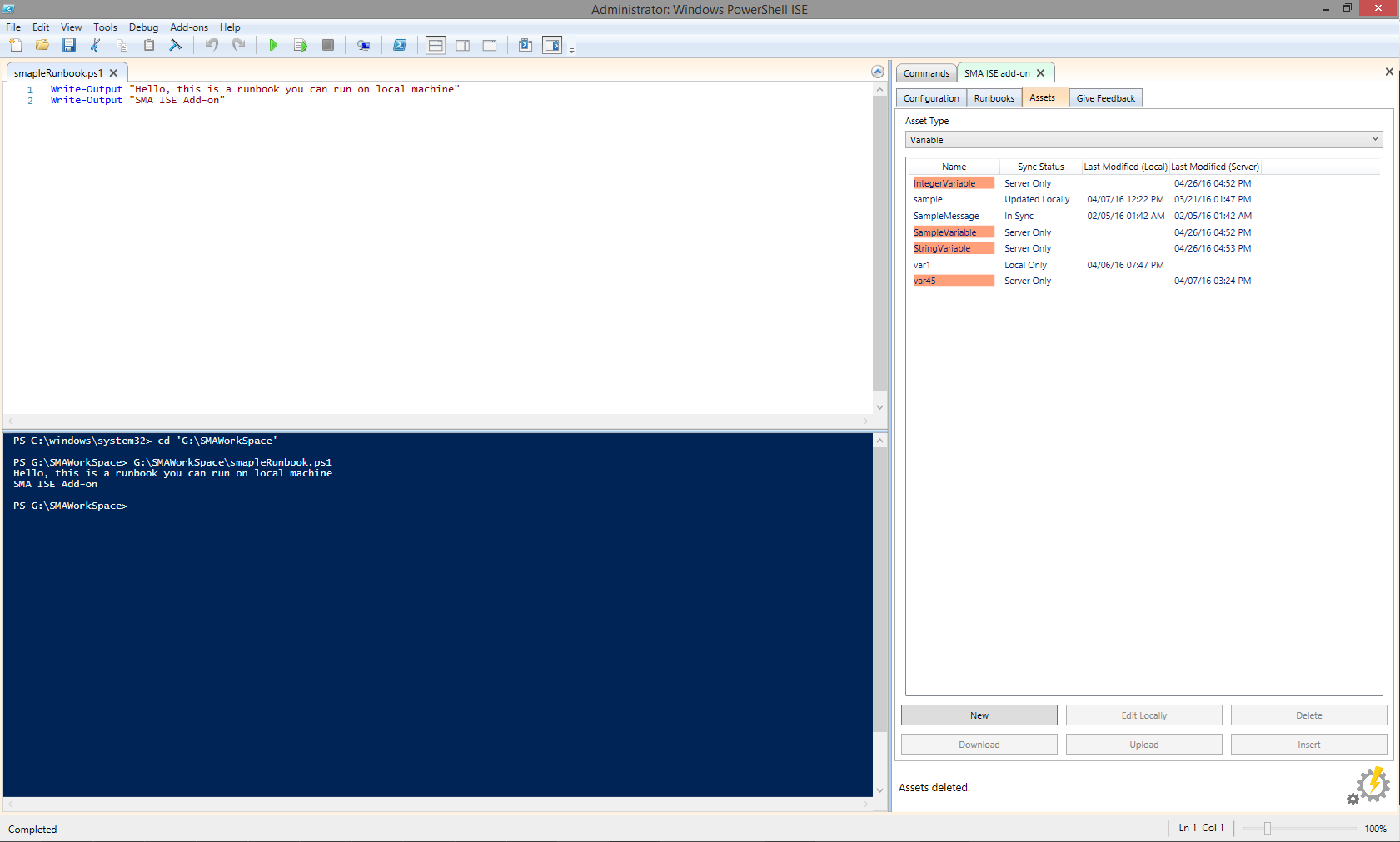 In this case, these variables are highlighted because their value fields have not been set. Double-clicking a variable asset allows you to enter the desired value.


Let us know what you think! If you discover any issues or have any feature requests you can submit feedback using the Feedback tab in the ISE add-on itself.

Note: The SMAAuthoringToolkit cmdlets are currently incompatible with AzureAutomationAuthoringToolKit due to name conflicts.
0 Likes
Like