The System Center Virtual Machine Manager 2012 Beta (SCVMM 2012) has just been released and there are some great high-availability and clustering features coming to simplify datacenter management.

Virtual Machine Manager has become a critical part of the datacenter or private cloud infrastructure, so keeping the VMM Server up and running is essential to maintain service continuity, monitor VMs and provision (or de-provision) VMs to respond to fluctuations in usage.  Previously the VMM Server could be unavailable if it crashed, if the server hosting it crashed, or if that server needed to be shutdown for maintenance or patching.  With VMM 2012 it is now possible to deploy the VMM Server on a Windows Server 2008 R2 Failover Cluster to give it high-availability and mobility between nodes.  The failover can be planned (for maintenance) or automatic (in case of a failure) to ensure that VMM remains online.  Deploying the VMM Server on a cluster is also very easy – simply begin the configuration on an existing cluster node and the installation process will detect that high-availability is possible and prompt for confirmation.  An extra configuration step will appear asking for the standard client access information, such as the IP Address and a friendly name for the group.  The VMM Server then should be installed on the other cluster nodes.  It is important to note that the configuration of the VMM Library needs to be done on shared storage accessible by all nodes so that the VMM Server can always access the library regardless of which node it is running on.  This can be done by creating a clustered File Server .

Virtual Machine Manager 2012 now offers comprehensive management of not only VMs, but also the entire fabric, including networking, storage & clusters.  To simplify administration through a single console, it has become important to not only manage Hyper-V host clusters, but be able to deploy them through VMM, including tasks such as cluster creation, along with storage, network, and resource management.  This can be done by selecting “Create Hyper-V Cluster” from the Fabric view.  A wizard is launched prompting for the cluster name and domain credentials.  Next Hyper-V hosts which will be nodes are specified, networking options are selected, Cluster Shared Volumes (CSV) can be enabled, then cluster Validation is run, and now the highly-available infrastructure is ready for use.  The cluster can even be streamlined as a part of a bare metal deployment during the configuration of the Hyper-V hosts.  Furthermore, VMM 2012 gives the option of deploying standalone (non-clustered) VMs on a clustered host.  This can be useful when virtualized domain controllers are being deployed because they should not all be clustered as this can lead to bad situation if the entire cluster shuts down.  This is because the cluster needs access to a DC to start the clustered VMs, yet if all the DCs are on clustered VMs, then nothing can ever start – so having at least one DC on a non-clustered VM or on a physical server is required. 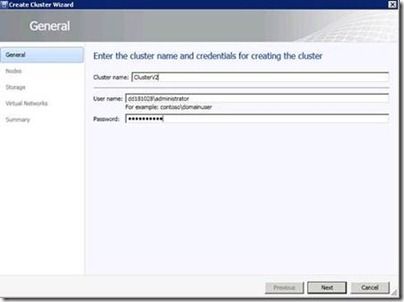 Cluster patching is one of the most tedious tasks which administrators are faced with as it requires live migrating VMs from a host, pausing the node, patching, rebooting, un-pausing the node, and live migrating VMs back to the host…and this process must be repeated for every node in the cluster.  VMM 2012 has released a feature called Update Management which automates this process, saving admins many hours each year.  After an admin has defined a baseline of patches which they want to deploy via WSUS, they can scan all the nodes to determine which hosts are not compliant (or are missing Security or Critical devices).    Once the non-compliant hosts are identified, “Remediating” the cluster will start an orchestrated patching workflow which places a node into maintenance mode (which will pause the node and serially live migrate VMs from it), installs the missing patches, removes the node from maintenance mode, and then repeating the process for the other nodes in the cluster.  Update management even supports Windows Server 2008 clusters and can be automated using PowerShell! 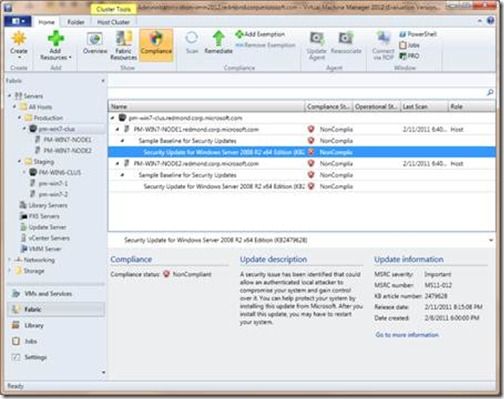 During the day-to-day operations of a datacenter certain hosts may get overloaded with VMs due to failovers, patching, new deployments or a variety of other conditions which can trigger VM movement.  It is important to avoid overcommitting a host with VMs which require more server resources than that host can offer, such as memory or processing power.  In VMM 2012 the Dynamic Optimization (DO) feature will monitor hosts and dynamically load balance the VMs across the cluster once certain thresholds are hit to avoid over-utilizing a specific host.  DO has both an automatic mode, as well as manual configuration, which can proactively detect problems when CPU, memory, disk IO or network IO are approaching certain limits, and it has configurable “aggressiveness” (which defines how balanced the cluster should be).  These checks are run every 10 minutes by default, and if an issue is detected the VMs will be live migrated to the best available node in the cluster.  DO even supports VMware and Citrix XenServer clusters and equivalent live migration technologies.  This feature is similar to the PRO-Tips technology available in SCVMM 2008 R2, but it does not require System Center Operations Manager, making it significantly easier to deploy, configure and manage. 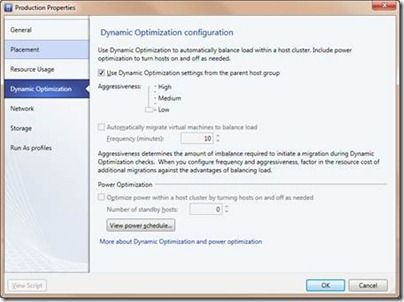 Power Optimization (PO) is one of the best “Green IT” features to come out in a while and could save datacenters a significant amount of money by turning off unnecessary servers.  PO is actually an extension of Dynamic Optimization (and only available in DO is in automatic mode), and it monitors the same server resources as DO.  Once the user defines a power optimization schedule, VMM 2012 will analyze the hosts in the cluster.  If it determines that the VMs can all run efficiently without one or more of the nodes and stay within the DO thresholds, it will live migrate VMs to other hosts and turn off the appropriate evacuated nodes.  If utilization increases on the remaining active nodes such that one or more powered off nodes are needed again, they will be turned on and the cluster will be optimized by DO.  During this process cluster quorum is tracked to ensure that the cluster remains online. 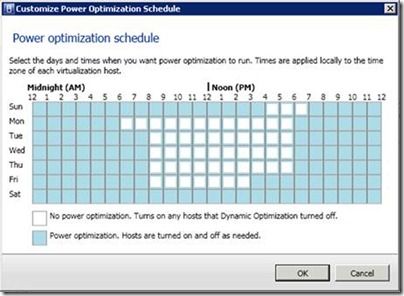 Hopefully this information helped you understand the benefits of these new System Center Virtual Machine Manager 2012 features related to Failover Clustering so you are encourage to try out the Beta today to get higher availability and simplified management while saving your IT department some money!