Turn on suggestions
Auto-suggest helps you quickly narrow down your search results by suggesting possible matches as you type.
Showing results for
Show  only  | Search instead for
Did you mean:
Details on Generation 2 virtual machines and using them in VMM 2012 R2
By

Some reasons you might want to give Generation 2 VMs a try are:

Generation 2 VMs may not be suitable for you if you require:

Note also that Generation 2 VMs do not support the older VHD format although by now you are probably already using the superior VHDX format anyway. You can always use the Edit Virtual Hard Disk Wizard in Hyper-V Manager to convert between VHD and VHDX disks.

Generation 2 VMs use different system firmware than Generation 1 VMs. Generation 1 VMs use a PCAT BIOS (as have the majority of OEM PCs until recently) whereas generation 2 VMs use UEFI firmware. Some of the advantages listed in the reasons you might want to try Generation 2 VMs are a direct consequence of this change, such as larger boot volumes and the new Secure Boot feature. One of the major advantages of UEFI firmware is that it is written in a high-level language (as oppose to 16-bit assembler for the BIOS) which makes it much easier for the Hyper-V team to maintain and extend. And this is exactly what Hyper-V has done. By extending the UEFI firmware to be aware of software based (otherwise known as synthetic) devices, Generation 2 VMs support booting from synthetic network adapters or synthetic SCSI disks and DVD. Using UEFI firmware has an important consequence on the format of a VMs boot disk, which is a major ‘gotcha’ that you need to be aware of. For more on the boot disk format see the Boot Disks section below.

Ultimately the decision on whether to try using Generation 2 VMs is up to you. You should be aware however, that once you’ve made your decision, there is no option in VMM for converting a Generation 2 VM to a Generation 1 VM (or vice a versa). For a more in-depth look at generation 2 VMs, please see John Howard’s blog .

The Identity page of the Create Virtual Machine Wizard was modified to allow you to select which type of VM you want to create. When creating a Generation 2 VM just select “Generation 2” from the generation dropdown. This will do two major things: First, when you come to the Configure Hardware page you will notice that those hardware devices that are not support by Generation 2 VMs such as floppy drives, legacy networking and IDE controllers will not be present. Second, when selecting the destination host for the VM only Windows Server 2012 R2 hosts will be allowed. 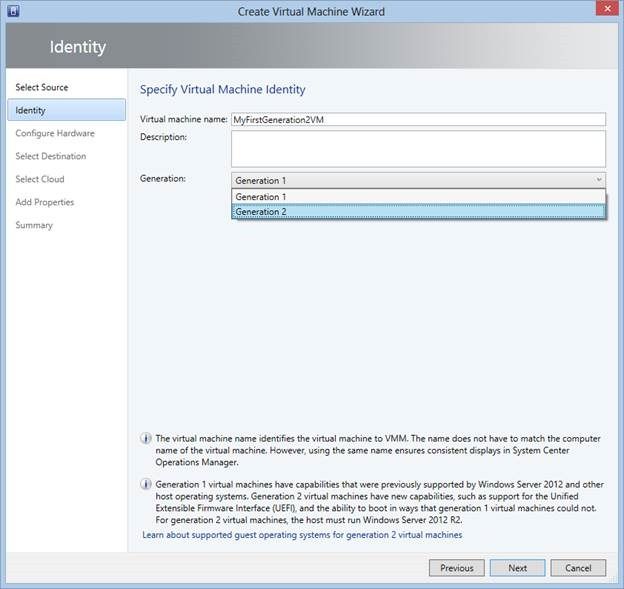 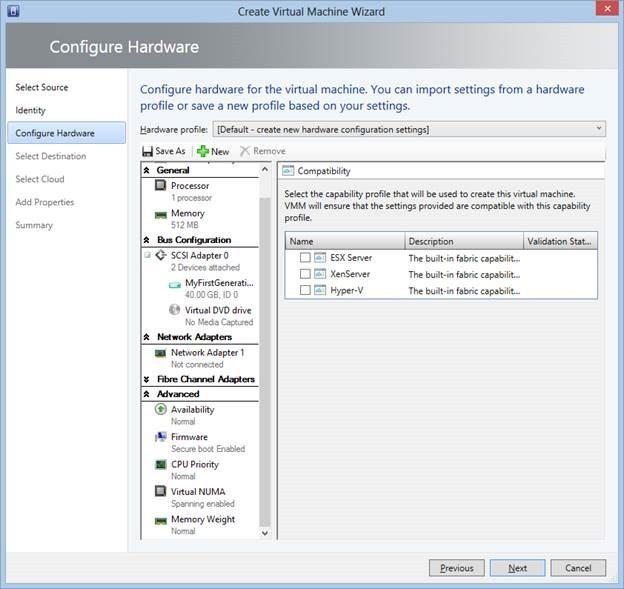 Figure 2 - Hardware for a Generation 2 VM

Of course if PowerShell is your thing, the VMM New-SCVirtualMachine cmdlet has been updated to take a Generation parameter of either 1 or 2. You can thus create a Generation 2 VM from PowerShell like so:

Once the VM has been created, it shows up in the VMM console window just like any other VM. If you want to check the generation of a VM you can do so from PowerShell by checking its Generation property:

Or you can open up its Properties window: 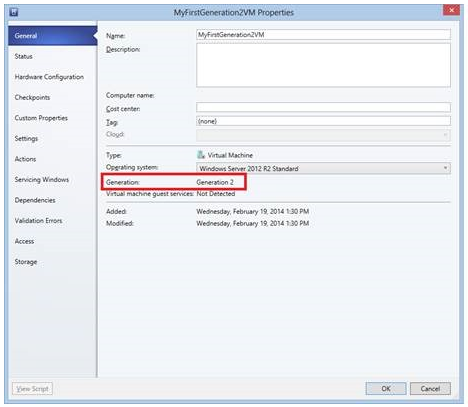 Secure Boot is a feature of the UEFI firmware specification used by Generation 2 VMs and supported by Hyper-V and VMM. Secure Boot uses a signature checking mechanism during the boot process to validate that only approved components are allowed to run. By default, Secure Boot is enabled for any new Generation 2 VM. It is a simple on/off property that can be modified via the Firmware settings in the VM’s properties dialog or via the SecureBootEnabled parameter of the Set-SCVirtualMachine cmdlet. Note that the VM must be off in order to modify this setting. 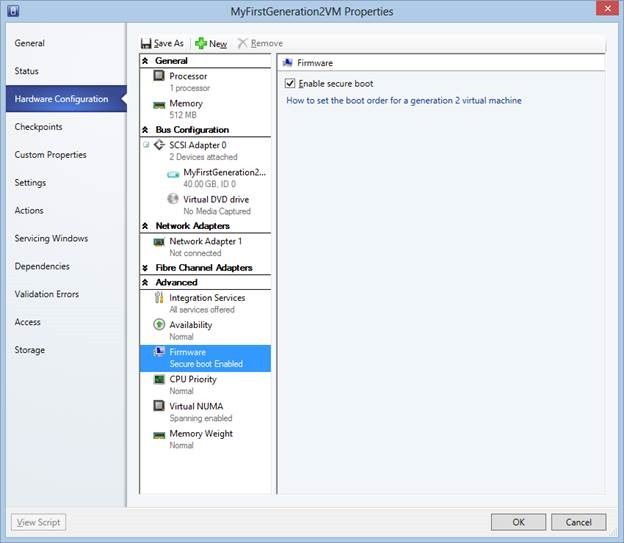 For the most part, you won’t need to worry about this setting as you’ll likely want to always leave this option enabled which is the default. For more details on the inner workings of Secure Boot see here .

Instead of a BIOS, Generation 2 VMs use UEFI firmware, a consequence of which is that the boot disk of a generation 2 VM must be GPT ( Technically, the boot disk can be MBR or GPT, as long as there is an EFI system partition present with a boot loader, but GPT is strongly recommended ). Generation 1 VMs, on the other hand, must have a MBR partition table, a requirement of its PCAT BIOS.

While not a problem when installing Windows ( Windows will lay out the partitions on the boot disk in the correct format automatically ), this does present a problem for those sysprepped boot disks you have stored in your VMM library. If you wish to create both Generation 1 and 2 VMs from these disks you will need to keep both an MBR and GPT version in your library. Unfortunately there is no feature in SCVMM 2012 R2 that will allow you to automatically know which disks are MBR vs GPT. To keep it straight, I would recommend that you use a consistent naming format for your disks, or keep the disks in separate library shares. One easy way for quickly telling if a disk is MBR or GPT is to mount it (right-click and select Mount) and then look at its properties from diskmgmt.msc.

Note that this discussion is only about the boot disk for the VM, non-boot disks can be either MBR or GPT for either generation of VM. 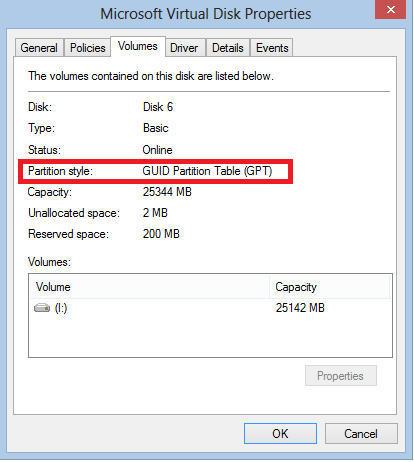 Figure 5 - Properties of a GPT disk

Another change with Generation 2 VMs brought about by the new UEFI firmware is a much more flexible boot order configuration. For Generation 1 VMs you would set the boot order from the options (CD, IDE Hard Drive, PXE Boot, Floppy). Generation 2 VMs, on the other hand, allow the boot order to be set among all of the bootable devices on the VM. For example, if your VM had two network adapters, they would each have an option in the boot order list. In addition to your VM’s bootable devices, any UEFI application running in the VM can create file boot entries and Windows will do exactly that during installation. 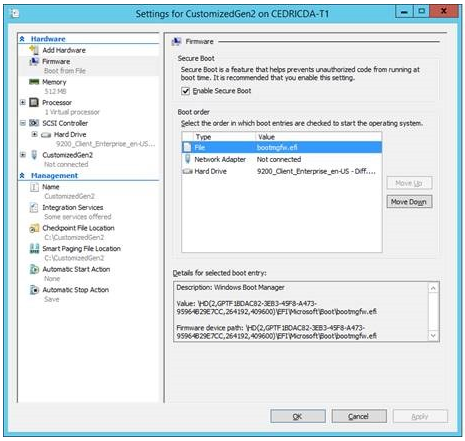 In SCVMM 2012 R2 we allow you to view and modify only the first boot device of the VM via our PowerShell cmdlets. This covers most user scenarios, however if you need more fine grain control of the full boot order list you’ll need to use either the Hyper-V Manager or Hyper-V cmdlets. To get the first boot device of a VM, get its aptly named FirstBootDevice property (note that the previously used property: BootOrder, will be $null for a generation 2 VM):

By default, when creating a new Generation 2 VM, the first boot device is set to the first disk which will almost always be “SCSI,0,0”. As mentioned previously, during installation of the guest OS, Windows will change it to something like “File,bootmgfw.efi”.

In order to modify the first boot device, you can use the Set-SCVirtualMachine cmdlet passing the device to set as the first boot entry in the FirstBootDevice parameter. The parameter is passed a string formatted as described above. For example, if you want to boot from your NIC, you would set it as such:

When a new first boot device is set, all of the other devices in the boot list are simply pushed down; nothing is actually removed from the list. If you want to remove entries from the list you will need to use the Hyper-V cmdlets. When booting, Hyper-V will go through each boot device in turn until one of them successfully boots the VM. Each failed boot device will generate a failure message at the console screen. For example, when I set my disconnected network adapter as the first boot device I see the message, “Boot failed. EFI network”. Assuming you set the device you want to boot from at the top of the list (or at least, only behind entries that fail to boot), the VM will boot up using your desired boot device.

Unfortunately software bugs are a fact of life and here is a known issue with Generation 2 VMs that exists in VMM 2012 R2:

The work around is simple enough; after creating a Template from a VM, modify the first boot device of the Template to a valid device. For example:

We recently found another bug surrounding generation 2 VM customization with GUIRunOnce commands. These are commands that you can specify in your VM Template that will automatically run the first time a user logs onto the VM. For example, in this next screen shot I’ve set it so that notepad will automatically start: 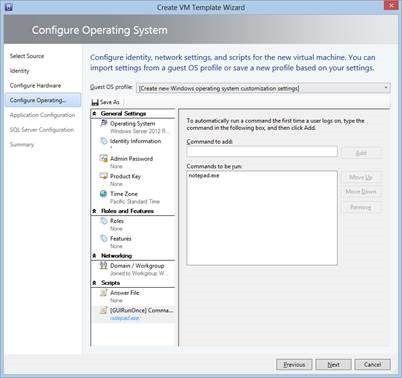 Unfortunately, these GUIRunOnce commands will not get executed for a generation 2 VM. We’ve identified a fix for this and it will be available in SCVMM 2012 R2 UR4.

Generation 2 VMs are a new type of virtual machine in Hyper-V that come with their own set of advantages and disadvantages. They represent a new direction for Hyper-V, and with their reduced set of legacy devices and new UEFI firmware they provide Hyper-V with a break from the past. In the future there will likely be new features that depend on these changes, like Secure Boot, and hence will only work with Generation 2 VMs. Getting started with Generation 2 VMs today will set you up to take advantage of these features tomorrow. Ultimately the decision is up to you, but whatever you decide, you can rest assured that VMM 2012 R2 provides support for creating and managing your Generation 2 VMs (outside of VMM services and VM Roles).

I hope that you have found this post helpful. Please feel free to submit feedback at the bottom of this post and/or ask questions on the VMM forums . Also, make sure to visit the VMM 2012 R2 TechNet Library .