First published on MSDN on Nov 20, 2015
Day three of an action-packed Ability Bootcamp should have produced four haggard student developers. But when we met up with Team Prognosis to recap their day, they were very excited, hyper even. And not just from all the Halloween candy they ate. Something major, something totally life changing had happened that day. 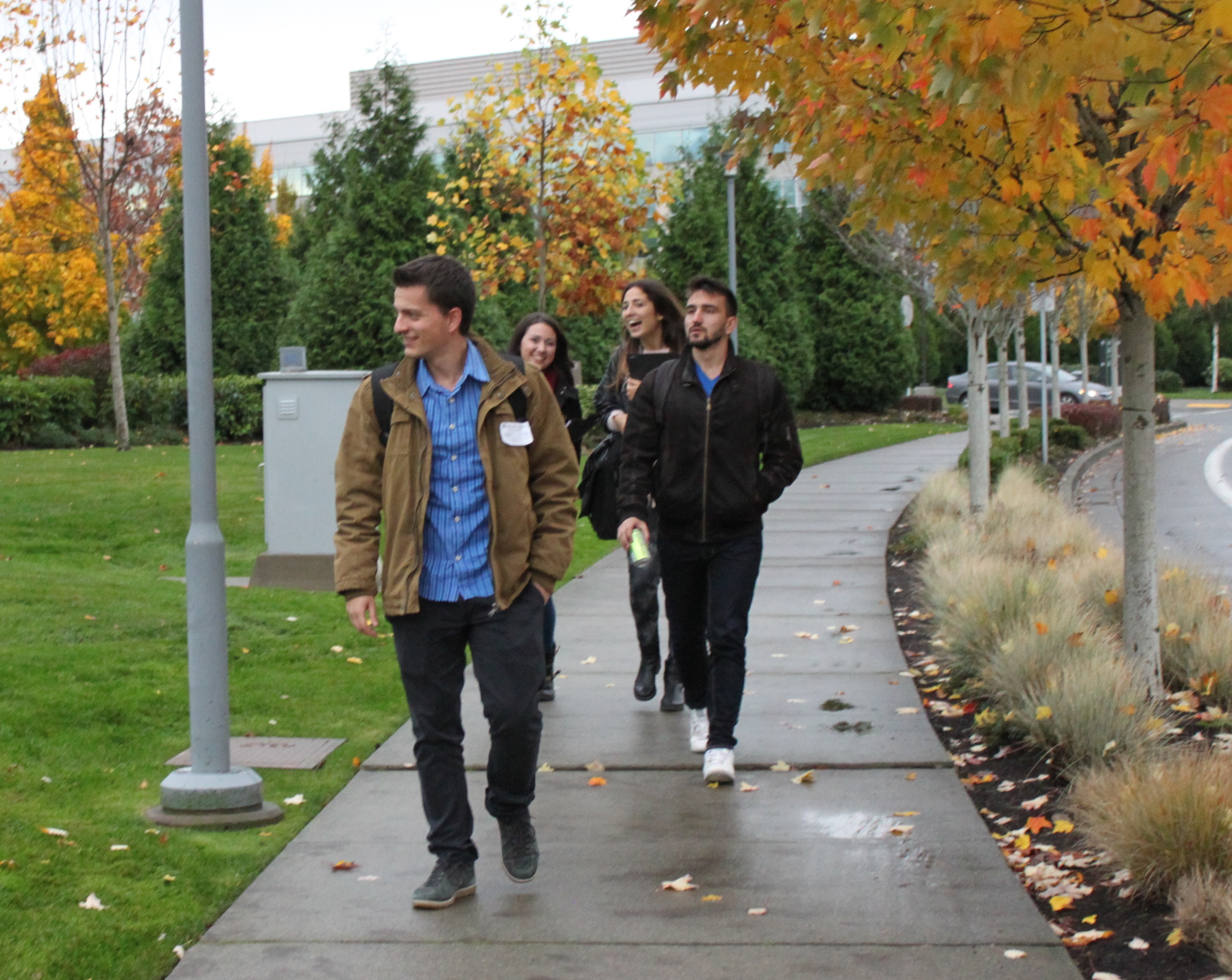 Prognosis is a Windows Phone app designed for early detection and intervention of Parkinson’s disease. The app collects user data from sensors embedded in a mobile phone and, optionally, via the Microsoft Band and runs in the background so data is collected unobtrusively.

In its current iteration, the app collects motor function, gait and quality-of-sleep data, which are critical for determining whether a patient suffers from two common Parkinson’s symptoms - “freezing of gait” and poor sleep quality.

However, the team is already working on the next iteration of the app, which will provide a way for Parkinson’s patients to be better understood when they speak. Because Parkinson’s can degenerate facial muscles, patients often have a difficult time speaking. The team is in the process of collecting vocal samples to feed into their algorithm in order to analyze the speech issue.

The team needs thousands of 3-second recordings of human vocal samples saying a simple "Aaaaahhh.” They have a voice collection portal available on their website for anyone to donate their vocals. Even so, the lack of voice samples available to the team was a major impediment to the project. (You can donate your voice here ).

Konstantinos explained, “We have trained our model with 70 samples from patients and 70 from healthy people. The NWPF promised to help us collect a lot more. I think we will start with a few thousand and maybe we will make it to 100,000! They also offered to help us by having our apps tested by their people. Awesome, isn't it?”

The NWPF will work with Prognosis to increase the size of the students’ database by leveraging the NPF’s site and community. For example, since the NWPF site is trusted by the Parkinson’s community, Steve offered to host the voice collection portal on the NWPF site and help drive traffic to the Prognosis website.

Microsoft has also pledged its continued support to further the project. 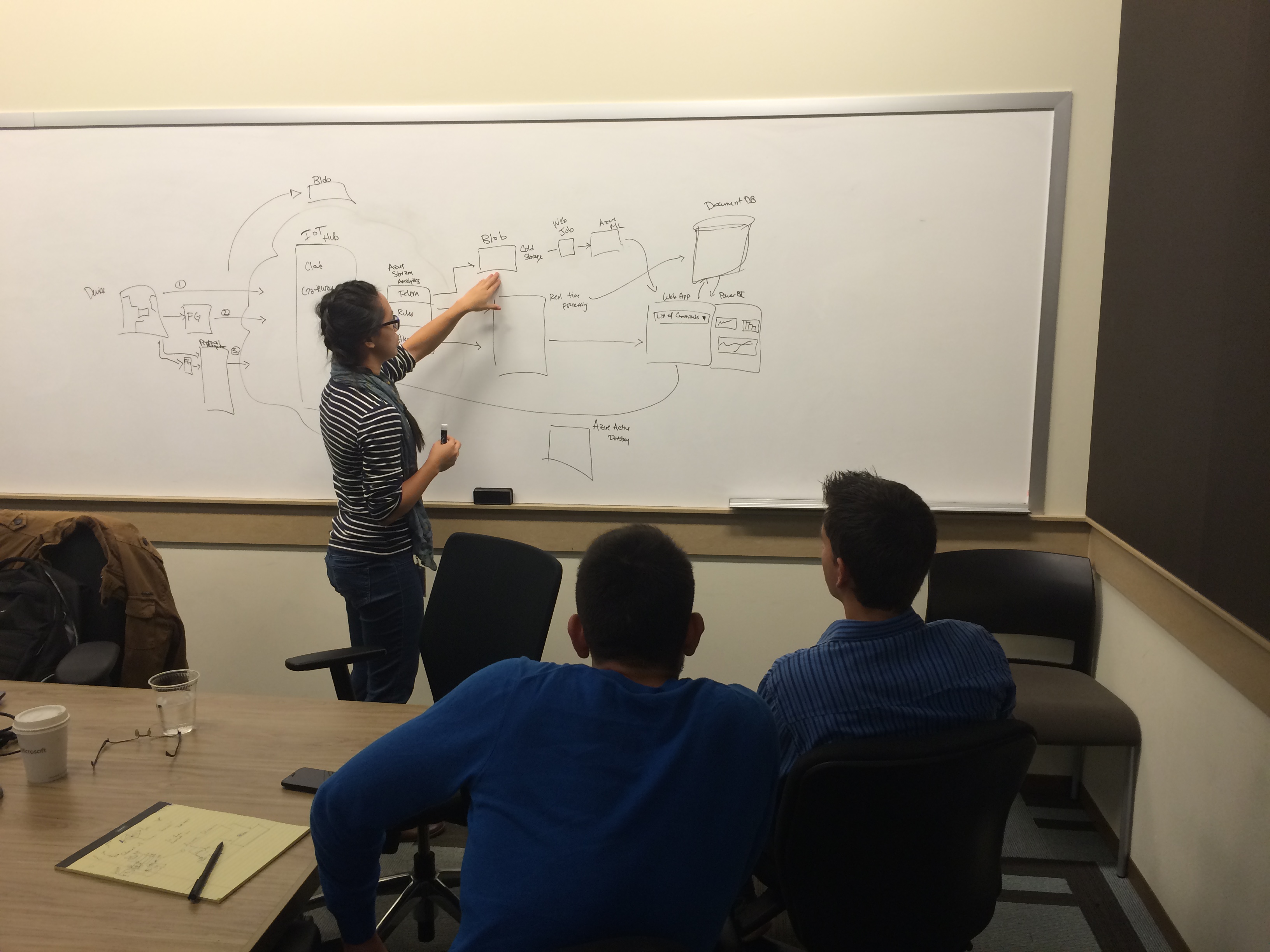 The team got to hang out that day with an Internet of Things (IoT) expert, the Microsoft Ability Innovation Board, and then ended the day’s meetings with an introduction to the concept of Inclusive Design . 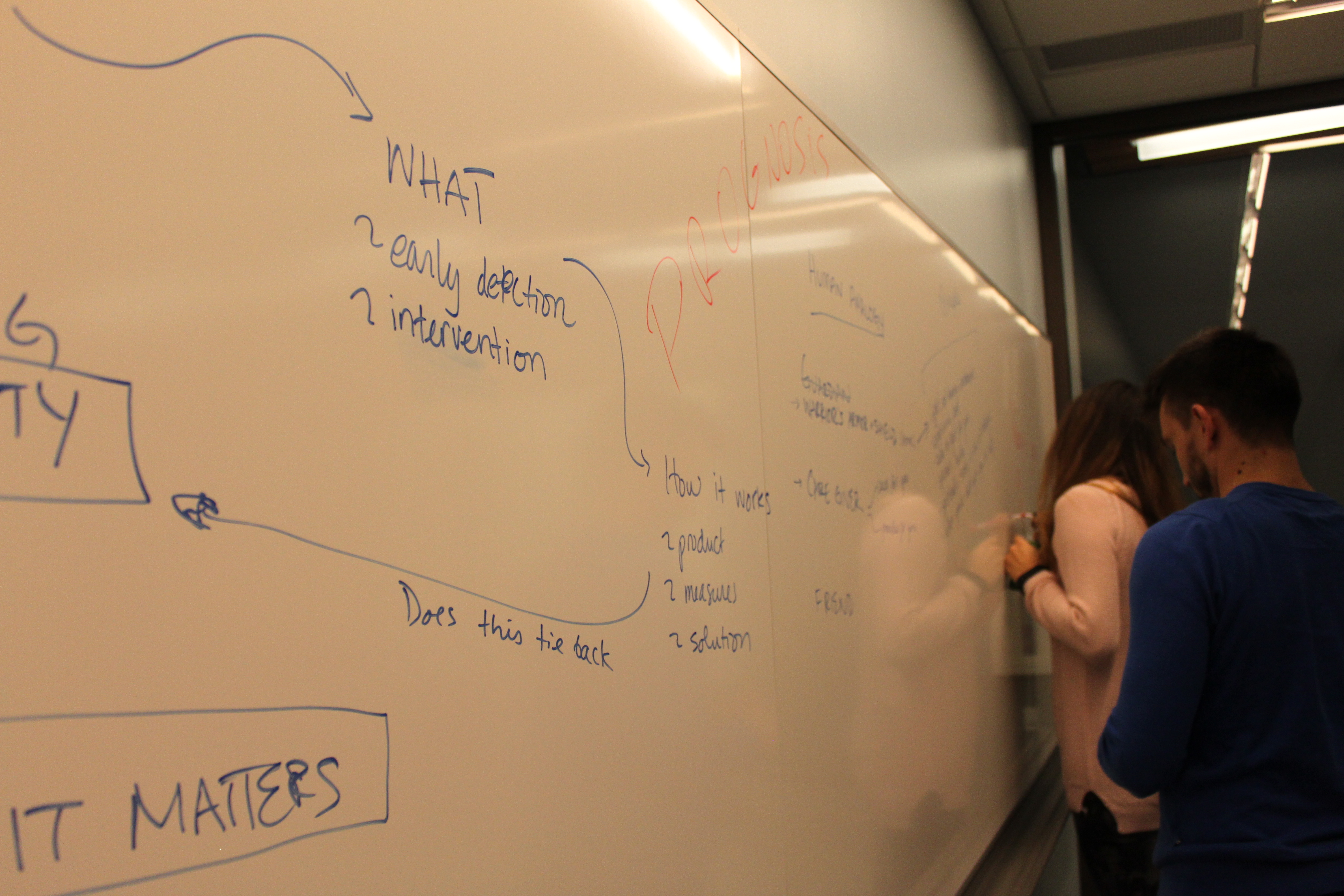 Inclusive Design is a concept that asks design to be both universal and personal. Kat Holmes , Design Director of Operating Systems, really sparked the students’ imagination by thinking about their app from a different perspective.

Specifically, the team wanted helped with their current logo, so they asked Kat to help them design a new one. With the innovative methods she proposed, such as asking them to describe Prognosis in six words, they were able to come up with something representative of their product. 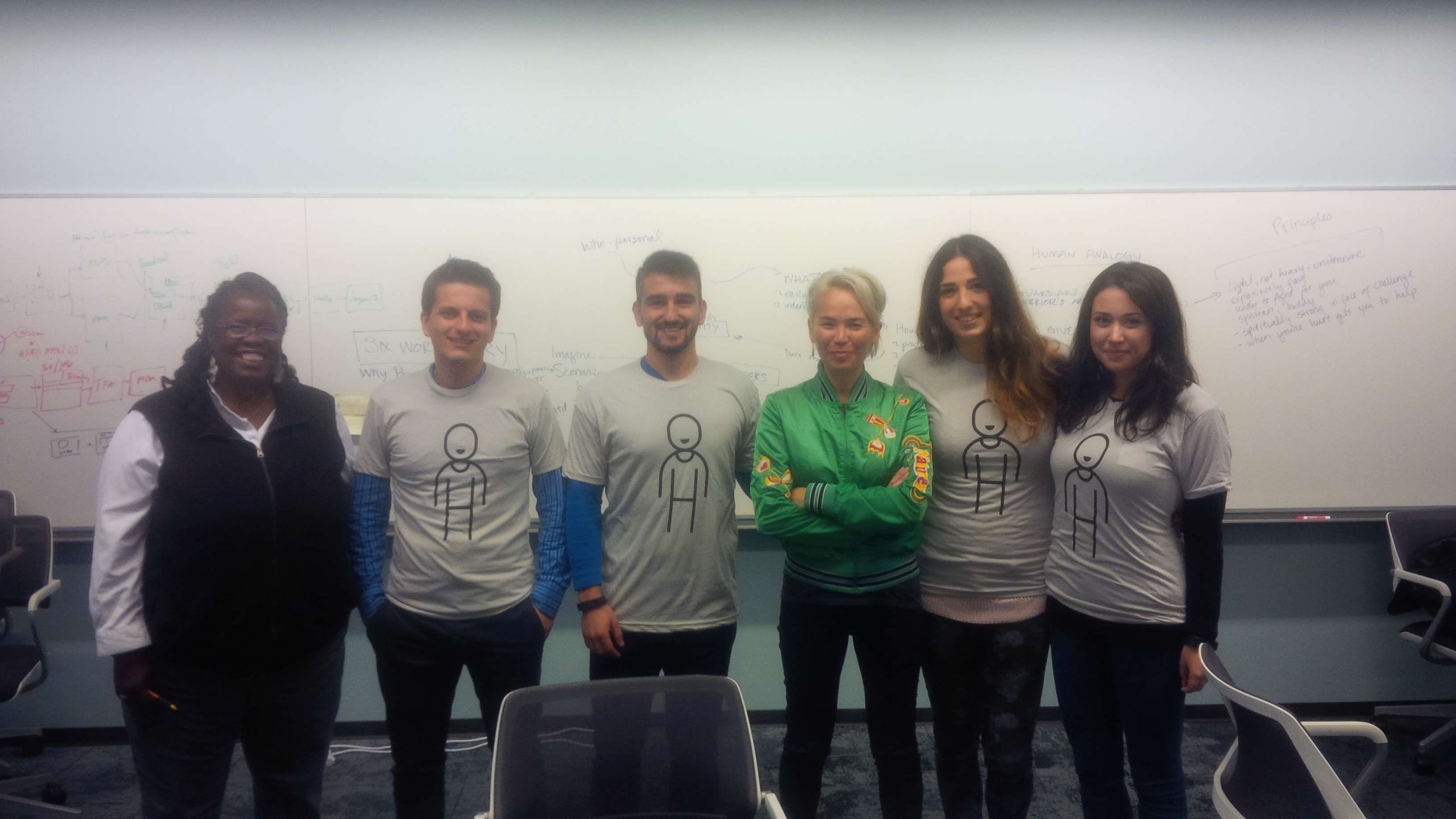 Vicky told us, “This was a really fun meeting. We turned our project into a character and named it “warrior’s armor.”

Konstantinos explained, “Prognosis is supposed to protect and help people. It ‘protects’ because it is in a position to make the early diagnosis of a serious disease and ‘help’ them since it solves everyday problems they face and supports them to sustain a better quality of life. After a lot of brainstorming we came up with the idea that if we wanted to represent our project with a person, he would be a calm and trustful warrior! This is why we thought that a great new logo for our project would include a warrior’s armor.”

The Microsoft Ability Innovation Board is a collection of people at Microsoft promoting projects that help people with disabilities of any kind. Bill Buxton, Todd Parsons, Jay Beavers and Jenny Lay-Flurrie advised the students to be aware of the emotional implications of their project. 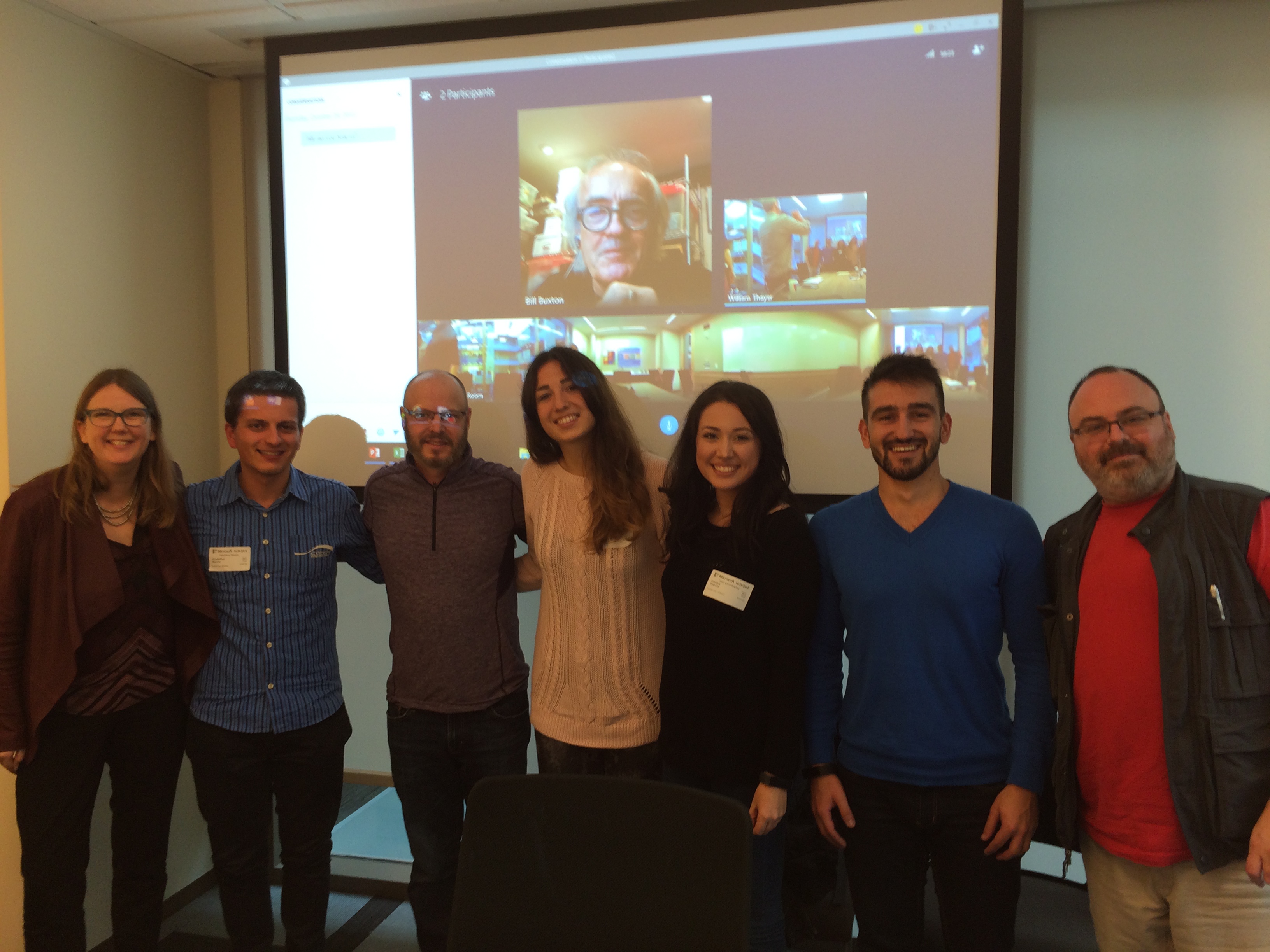 Despina was most impacted by a conversation about empathy. “Jenny told us to focus on finding the right balance between empathy and distance. You need empathy to make the best product you can, but too much empathy can lead to wrong decisions about the process of your project. We learned that you cannot accelerate your solution just because you want to help people faster.”

This is hard for these deeply invested, sensitive students. Despina described a patient she met during the research phase. “Because he couldn’t move his facial muscles, you never knew how he felt. But one day, someone mentioned his deceased wife. His face didn’t move, but tears were streaming out of his eyes. It was so painful to watch.”

As Despina herself blinked away tears, Vicky got emotional describing her grandfather. He passed several years ago and suffered from Parkinson’s. “When I started studying the disease, I realized there were so many things I could have done to delay the progress of the systems, but I was just a little girl! It’s so hard not to feel guilty.”

Despina comforted Vicky, “Your grandfather would be so proud of you.”

It could be you next year at Ability Bootcamp, meeting with Microsoft experts to get the resources you need or chatting with designers to develop the story of your project.

Are you working on an idea that could improve the lives of the millions of people with disabilities? Got a great idea but need data to back it up? Who knows, Microsoft might introduce you to exactly the right person willing to share the specialized research you need.

But first, you have to take the leap and show your project to the world. Register for Imagine Cup today. We will see you there!
0 Likes
Like