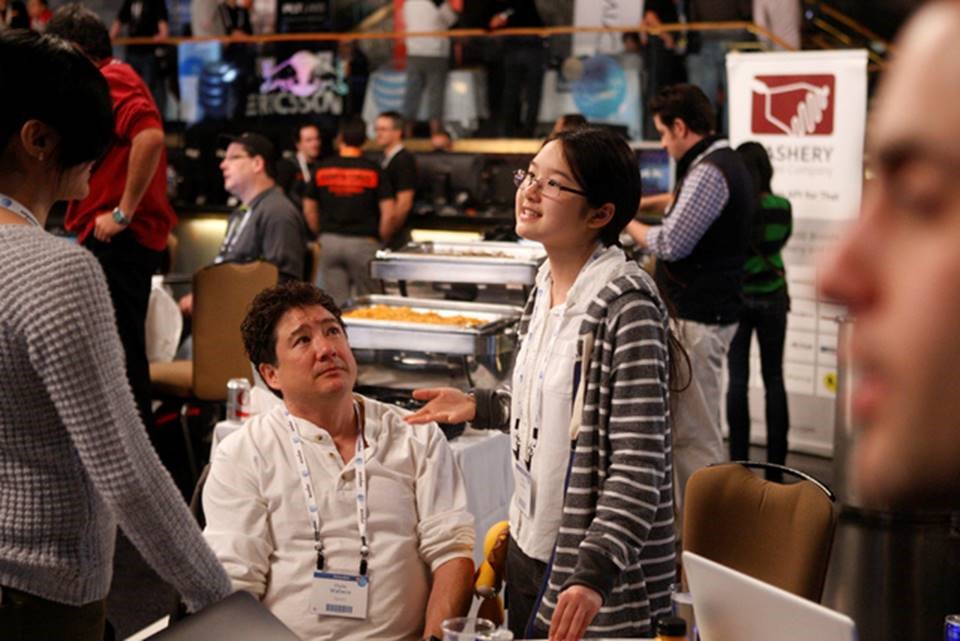 When Sabrina Wallace describes her latest technology project, she launches into a pitch and sounds more like a seasoned entrepreneur than a teenager. The young programmer recently walked away with $20,000 in cash prizes from the AT&T Hackathon in Las Vegas for an innovative app designed to prevent traffic accidents.

Not only does she program, she just started college at the University of Nevada, Las Vegas and volunteers teaching middle school students how to code. This impressive young teen has big plans for her future.

At the hackathon, Sabrina and her father, Clyde Wallace, created a wearable device and cloud-enabled app that monitor driving habits to detect if users are facing danger due to road hypnosis, a trance-like state that occurs when driving on an open road for a long period of time. A watch measures wheel activity to determine if a user is driving in a straight line, and measures hand movements to detect when someone may be falling asleep. The app then sounds alarms and asks questions to ensure drivers stay awake.

“One of the most dangerous situations where people crash is driving on a straight road with no other cars around,” Sabrina says, explaining the importance of the project. “Our safety app will wake up people who start falling asleep.”

Sabrina did all the coding for the hack project. Because her experience was working in the object-oriented programming language Ruby, she had to learn how to program in C#. She crammed the day before the hackathon to learn the C# syntax.

Sabrina started college early and is majoring in computer science. Her father introduced her to programming at a young age and she’s been hooked ever since. After finishing her degree, she wants to continue her studies and get a doctorate degree and then go on to work for a tech company.

Though Sabrina debated where in the technology industry her true passion lies, she said coding at the hackathon helped finalize her decision. Input from two close mentors – Lee Misch, a lecturer at UNLV’s Department of Computer Science and John Kowalski, a system administrator at UNLV – also helped her decide on her focus.

“I used to go back and forth and battle whether I wanted to do hardware or software,” Sabrina said. “But now I know, I’m into software.”

Though this was Sabrina’s third time attending a hackathon, it was her first time as an official team member among the hundreds of other technophiles, developers and designers who traveled to Las Vegas to build apps.

Sabrina met Microsoft employees at the event who helped her through some hurdles associated with learning a new programming language, and now she hopes to intern or participate in a Microsoft program for college students. She will also continue to develop the driving-safety app and plans to enter more hackathons in the near future.

Ask Sabrina what she did with her half of the prize money and she begins to sound more like a teen. “I bought games and a Surface Pro 3,” she says. “Oh, and candy.”