Turn on suggestions
Auto-suggest helps you quickly narrow down your search results by suggesting possible matches as you type.
Showing results for
Show  only  | Search instead for
Did you mean:
Which Imagine Cup World Finalist team will win the Ability Award?
By 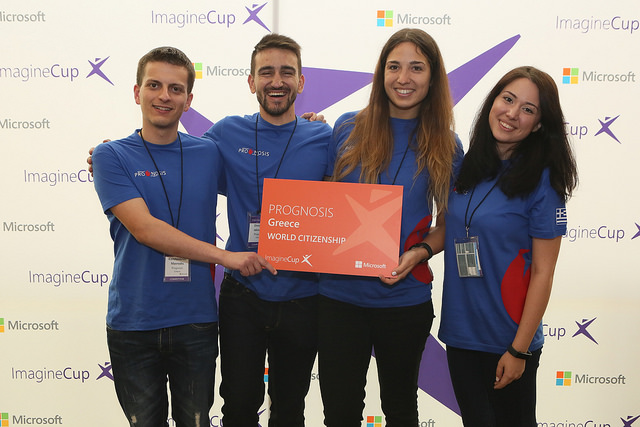 I’m excited to announce that we’ll be presenting one of the 35 Imagine Cup World Finals teams with the Ability Award on July 28 here in Seattle!

Microsoft strives to create and deliver technologies that empower every person and every organization on the planet. The spirit of Imagine Cup aligns with this notion, especially as so many of the student developer teams want to design technology with a humanitarian impact. We want to encourage and recognize Imagine Cup student teams whose projects were geared toward accessibility and empowering people with disabilities through the Ability Award.

Any Imagine Cup World Finals team can submit to win the award, as long as the project is innovative and progresses accessibility and inclusivity in the world and workplace. The judges will assess each project based on its design principles, usability and potential impact on the market. The winning team will receive an all-inclusive trip to Microsoft headquarters in Redmond, Wash. where they’ll discuss their project with numerous teams from across Microsoft. (See the rules here .)

Winning the Ability Award was, the team said, “a big deal because we had to get our product to the ears of as many people as possible.” And they knew that the award would give them that opportunity.

In October 2015, the team attended a boot camp at Microsoft headquarters and spent time discussing their project with experts from across Microsoft in Engineering, Accessibility and Inclusive Design. The team said the boot camp was invaluable:

“It gave us all the needed supplies to scale to something more than just a student’s project. The boot camp experience matured each and every one of us as engineers, developers and humans.”

As developers, it’s critical to think about how technology can make a difference in people’s lives. Building an app or new piece of technology with compassion and inclusivity in mind won’t just land a 2016 Imagine Cup World Finals team back in Redmond for the boot camp – it will help empower people of all abilities.

For Team Prognosis, the most important lesson of their boot camp experience was understanding that their app, “should not be about changing the people with disabilities, but rather adjusting the environment to fit [the person].”

We can’t wait to see what this year’s 35 Imagine Cup World Finals teams will do with accessibility technology. Tune into the Imagine Cup Awards Ceremony at 9:30 a.m. PT on Thursday, July 28 to find out which team wins the award!