First published on MSDN on Jul 30, 2015
We did it!! We broke the GUINNESS WORLD RECORDS™ for the “Most People Trained in Computer Programming in 8 Hours." 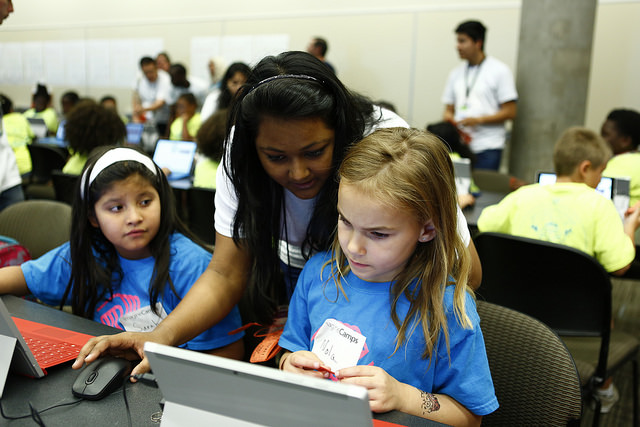 Kids from all over the Seattle area, including from the Boys & Girls Club of King County, arrived at the Microsoft campus today for Imagine Coding Camps. In four bustling rooms throughout Building 92, children learned how to code in the best way possible, by having fun.

This is not your ordinary coding camp. Not only was it offered free to the public, it also marked our attempt to break a GUINNESS WORLD RECORDS™ the most people taught computer programming in 8 hours.

Students danced to music playing in the rooms. Microsoft Student Partners and Imagine Cup competitors ran all over the rooms answering questions and passing out raffle tickets, clearly jazzed to help out.

Students performed two coding exercises. The first one, “Color Customization,” teaches the basics of TouchDevelop and how to navigate the program. The second exercise, “Piñata Breaker,” challenges them to change backgrounds, graphics, add their own sounds and change the speed of their piñata.

To keep the kids super motivated, we hosted raffles. Every time a kid completed a new challenge, they waved their hand to get a raffle ticket. These tickets enter them into a drawing to win prizes like a Raspberry Pi developer board, Minecraft key chains or a t-shirt signed by Jens Bergensten, Lead Developer of Minecraft. 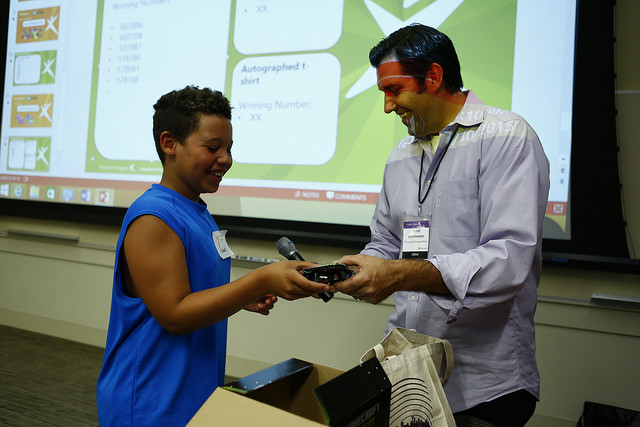 We asked local parent Melody Murdock why she brought her kids to coding camp. “I signed my kids up for the Imagine Coding Camp because I wanted them to get first-hand experience coding and the exposure to a company like Microsoft in general. I feel to be competitive in the future, these kids have to know about technology and will most likely be expected to know how to code at some level—no matter what field they go into.”

Melody enrolled her 7-year-old son, Everett and 10-year-old daughter, Sedona. “I was especially excited to take my daughter. I feel females don’t always get the encouragement or exposure to pursue interests or careers in the high-tech sector. I want her to know that’s an option.”

It worked. Sedona begged her mom, “Can we do this again next year, please, please?” 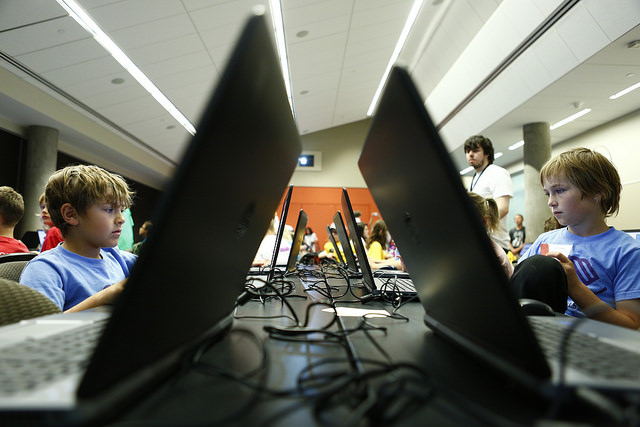 Larrisa Jarvis told us about her son’s experience. “My kids were a little grumpy this morning. But once the camp got going, they really lit up, engaged. Raising their hands, psyched about the raffle ticket prizes, and getting the games to work!”

For several kids, this camp was the first time any of them coded. On the way out, they were smiling and almost giddy about how cool it was. Dylan Peay exclaimed, “I wish that coding camp went all day!” His cousin, Everett, said it all, “I didn’t know video games were designed by using code.”

Find coding kits similar to “Piñata Breaker” over on Microsoft Imagine , which connects you with the tools and knowledge you need to create, code and develop your ideas. So whether you’re new to coding, studying it in school, or planning for your career, you can dream big, build creatively, and boldly bring your ideas to life.

And, of course, be sure to watch the live webcast at noon PT Friday to see Microsoft CEO Satya Nadella crown the next Imagine Cup winner.