This is the next installment of our blog series highlighting Microsoft Learn Student Ambassadors who achieved the Gold milestone and have recently graduated from university. Each blog in the series features a different student and highlights their accomplishments, their experience with the Student Ambassadors community, and what they’re up to now. 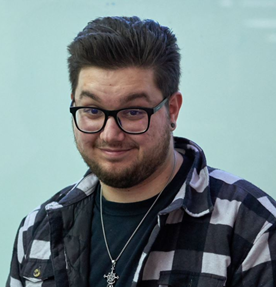 When you joined the Student Ambassador community in 2015, did you have specific goals you wanted to reach, such as a particular skill or quality?  What were they?  Did you achieve them? How has the program impacted you in general?

I didn’t join with something particular in mind. I just wanted to learn and grow in general. I had been fascinated by technology for a long time and could not decide on a specific area.  That’s why today I’m a full-stack engineer and AI researcher--everything is fascinating. The community changed me from just wanting to be a professional to becoming a teacher because, you know, sharing is caring, and I care for the future.

I joined the Student Ambassador community’s Web and Clean-Code Path (similar to the current Leagues), and then since there was no Mobile Development Path, I created that path after I learned it on my own from Microsoft Docs for Xamarin. [Editor’s note: Leagues are groups within the Student Ambassador community dedicated to specific areas of technology or social issues]. Then I did the same for the AI Path while being an Instructor at the Microsoft Academy at my university for .NET and Databases.

What are the accomplishments that you’re the proudest of and why?

It is hard to decide because there are 3 equally “WOW” things I have done while I was a Student Ambassador:

What have you been up to since graduation?

I have just started my Ph.D. program for the next 3 years, but the next challenge is being a full-time employee at Microsoft in an Apps Consultant role. The path for me stays the same: grow and help the tech communities develop.  Just a different “title”, like always.

The truthful answer is no. Let me explain.  I am an ambivert (introvert + extrovert), which means that with all people, I’m an introvert until we “link”, and then I become an extrovert. So, now, after hundreds of workshops, tens of events, and thousands of people met, I could say: ”I should have upped the pace into embracing the new challenges”, but that is not something possible as being initially shy is part of my nature, and I am proud of the result.

The community is like hanging out with your friends who also know a lot about technology and who also want to know even more. Oh, and your friends also know more people from outside of your country with the same drive and passion, so you get to hang out with them also. And Microsoft employees and Microsoft Most Valuable Professionals and… So have you applied yet?

Learn as much as you can, and then share what you’ve learned with others and then, finally, repeat. The only way to make a better world is to have a better version of ourselves, and who can better accomplish that than us? To grow together, help others and get help when needed, everyone is super friendly here.

Do you have a motto in life, a guiding principle that drives you?

As cliché as it may sound, I have a similar one to Microsoft’s, so that is why I’m following “you guys”:  Empower people to achieve more through technology.

What is one random fact few people know about you?

While being an “all-tech guy” (Full Stack, AI research, teaching assistant at a technical university), my focus and a lot of my knowledge are about the human mind (behavior and way of thinking). My ultimate goal is to better understand what drives humans to do certain actions and for that, I know a lot of history, arts, literature, and psychology.  My area of focus is NLP where I use all my human-oriented knowledge to augment algorithms. I do know a lot of math and exact science also, but that is only to be able to fuel a structured way to the “Human Mind” formula.

Another random fact is that I plan on having a huge house where I will have: 8 dogs, 4 cats, a bearded dragon, a cockatoo, a macaw, and probably more. As long as it does not bite me too hard or sting, we are friends; I love all life.

Good luck to you in your journey, Alexandru!