Today we’d like to introduce Sukhman Preet Singh Jawa who is from India and graduated this past winter from JECRC University in Jaipur, India. 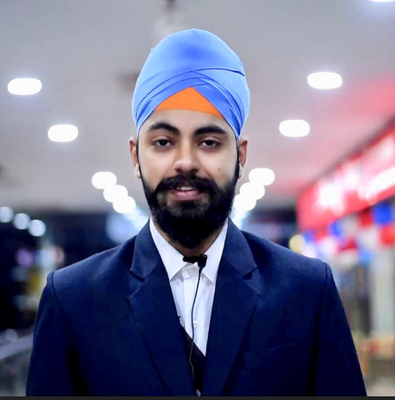 When you became a Student Ambassador in 2018, did you have specific goals you wanted to reach, and did you achieve them?

What I really wanted to do when I joined was to learn new things that are happening in technology. I was not connected to a community of people that would be actively participating in not just the development of the tech, but in adoption as well. This program gave me that platform and enabled me to connect with people around the world and discover technologies, like cloud, that back then were more like something that you would just read on a blog, and you would be like “Oh my God. What is that?”. These kinds of innovations were primarily my goal, and then after a year I was getting into it, then Microsoft Learn came and…whoa… I was just blown away. The amount of content, the amount of learning resources that were there, they were the best thing that I could hope for.

What was the one accomplishment that you’re the proudest of and why?

I wanted to build a community on my campus. I wanted people to build projects with me and participate in hackathons, so I launched a community called Microsoft Tribe. We initially invited students from our university, but the response was so overwhelming that opened it for the entire city. Last year we crossed 500 people--students and developers who are working on Microsoft technologies and trying to build the next generation of products. They are actively collaborating, teaching each other about the technologies that they know. It's more like mutual learning, and even sharing opportunities for jobs to increase participation.

How has being a part of this community impacted you and helped to prepare you for the next chapter in your life? What are you doing now, what do you have planned?

I have been able to amass so much knowledge being in this program. Proper knowledge about not just technology. Knowledge about people, knowledge about how to pitch, how to be a part of a team, how to work together. These particular skills that I’ve acquired have enabled me to--alright, I'm going to brag here--I just founded my own startup, and I'm building products for developers to boost their productivity and enable them to have more granular control over how they're building their products. I never thought I was going to talk about this. I was saving it for some special occasion, and I guess this is it.  The scale of learnings from this program is amazing.

The Student Ambassadors program really sparked a new kind of motivation for me. Seeing all those amazing people doing all that great stuff, it inspires other Student Ambassadors to achieve more, to engage more with that community, to learn more.  I won the top 100 Engineering Students Award in India, and I credit being in this program for this accomplishment. If I hadn’t been part of this program, I would have never thought of engaging with such an amazing dynamic of students and developers who are at the cutting edge or part of building the new world.

If you could go back in time, is there anything you would have done differently as a Student Ambassador?

I started as a sophomore, but had I got a time machine to go back, I would start the moment I joined college.

If you were to talk to a student who's interested in joining the Microsoft Student Ambassadors community, let's say you were trapped in an elevator with them for 30 seconds, what would you say to convince them to join?

I would hope the elevator stops for more than 30 seconds. This program enables you to achieve things that you would normally achieve later in your life. I would give this advice to people who generally don't show up in tech. I would love to see more women joining this program because it embodies so much more about who you are. It is about growing yourself and community around you. You need to be a part of the program. You are going to miss out a lot of things if you don't join.  If you're into tech, if you're into learning, if you're into being part of student communities, just join this program. Don't think twice.

I would say start using Microsoft Learn early on. If I would have started using it when I became a Student Ambassador, I would have exponentially more knowledge than I have right now. And build connections with people you know, be a part of the community, stay immersed. Never stop dreaming about what you can build with technology. You've got access to such amazing people who are being part of that innovation that is happening round the corner, just reach out to them. If you have questions, just ask them.

Do you have a motto, a guiding principle that you live life by?

I have a motto--“empathy is greater than technology”. There's a saying that we stand on the shoulders of giants, and we build upon them. As technologists, as innovators, as engineers, it becomes our responsibility to build solutions that empower people who are diverse. We must innovate and build for all of them. Be inclusive and understand the problem from the point of the person who is facing it, not from what we think that problem might be. Yeah, that's “empathy greater than technology”.

Good luck to you, Sukhman, in your future endeavors! And if you're interested in making a difference in tech, apply to join the Student Ambassadors community today.

Very encouraging to me as a new student ambassador. Keep shinning