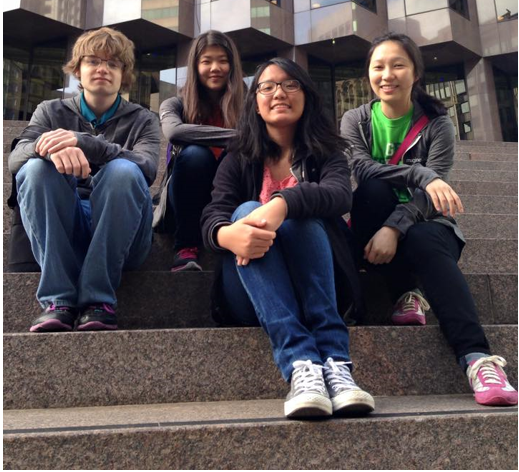 Team Centauri just returned to San Antonio, Texas, after competing in the 2015 Imagine Cup U.S. Finals in San Francisco. With three of the four members still in high school, Ryan Cooper, Jingqi Zhou, Angela Chen and Sophie He spoke with us about their experience as one of youngest teams participating in the Imagine Cup.

Ryan (18) and Jingqi (19) met at robotics club where student teams build and program FRC robots for competitions. After several years of programming robots together, Ryan suggested to Jingqi that they enter a tech contest organized by Microsoft called the Imagine Cup. They wanted to put their coding skills to test in the real world.

Jingqi was all for it. Also invited to join were Sophie He (16) and Angela Chen (17), whom they knew from band class at Louis D. Brandeis High School. Sophie and Angela also belong to the junior robotics team, but were less confident programmers. Ryan and Jingqi specifically wanted to include Sophie and Angela to facilitate a way for the girls to improve their coding skills. As the head of the team, Ryan firmly believes that learning is usually much easier when done together.

The four students formed Team Centauri and, in only nine months’ time, they wrote and successfully executed a bioinformatics app to simulate the evolution of viruses. Bioinformatics is a field of study that uses computers to analyze and manage biological information.

They would go on to educate themselves about bioinformatics, challenge their skills as young technologists and researchers, solidify Sophie and Angela’s love of computer science, and build a successful app that helped them qualify for the 2015 Imagine Cup U.S. Finals.

But how did a mainly high school age team come up with such a sophisticated idea? Would you believe it started with a robotic dog, a science lab, a Christmas gift of a disassembled PC, and playing with CSS?

Sophie wanted a dog when she was a little girl, but her father has an animal allergy. As a kind of joke, her parents gave her a robotic dog as a family pet. Though humorous, it sparked something serious in Sophie, a curiosity about technology and the way humans interact with it.

One Christmas morning, a 7-year-old Ryan unwrapped gift after gift that would eventually culminate in a PC computer. But the trick was, he would have to assemble it. Together with his tech-savvy father, Ryan built his first computer. Using books to learn about computer science, Ryan’s know-how and passion would grow so fast that, just five years later at the tender age of 12, he would write his own operating system.

Angela grew up going to work with her parents, who are genetic research analysts. Angela was wowed by the technology in the lab and how such intricate machines could be built and programmed to do something as difficult as sequence DNA. That’s when she realized that machines can do whatever you tell them to do.

Jingqi was 11 when she began to tinker with Web design. She used to copy and paste other people’s code to make her social media profile look better, but eventually read books about how CSS worked and wrote her own custom profiles from scratch. She laughs off the fact that her first exposure to code came from trying to make her social media profiles prettier, but she also knows that the look and feel of any program is a huge part of a user’s experience.

Through a happy twist of fate, these four came together to create ViraComp .

One night after school, they got together online for their nightly hangout sessions. As they chatted through possible ideas, Ryan had a thought. Spurred by the 2015 Ebola epidemic that swept through Africa and the subsequent scare when the virus landed on U.S. soil, Ryan wondered if there was a way to predict the mutating patterns of a virus. If so, technology could help stop the spread of viral diseases and potentially save millions of lives.

Everyone was on board and excited! But there was one problem. The biology.

They didn’t know enough about biology to pull off the idea. So, they checked out library books to teach themselves about DNA, genetic coding and bioinformatics. When they hit a wall with their biology knowledge, they reached out to two professors at The University of Texas at San Antonio (UTSA). The professors generously donated their time to help Team Centauri understand the inner workings of viral mutation.

Then the team got to work writing code to analyze data. They found public data published several years ago on the H1N1 virus (a form of Influenza A) and the Rhinovirus (the common cold). Using a hill climbing algorithm, they were able to analyze genetic sequences to see how the viruses would mutate in their environment.

A hill climbing algorithm is a technique for finding a solution that begins with a question and a less-than-effective answer to that question. The researcher takes that answer and improves upon it until no more improvements are possible. What’s left is the best possible solution.

Ryan defines a hill climbing algorithm as a kind of guess, “but learning as you guess and building off of the 'good' guesses. In the end you have a really good guess. It’s a lot like natural selection, only the 'good' genes get passed on, the 'bad' genes for the most part are systematically killed off.” 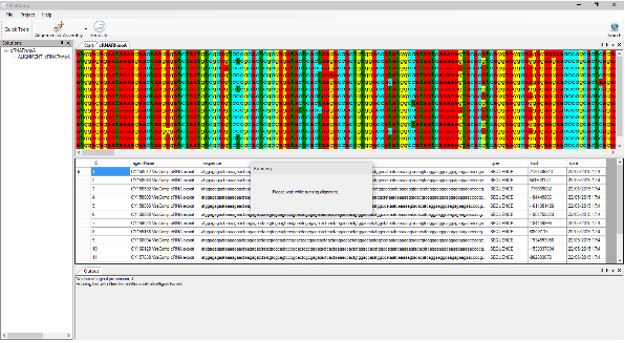 Then they applied this “best solution” as a probability and plugged it into a genetic algorithm (a genetic algorithm is a way of solving problems that mimic mother nature by using selection, recombination and mutation to evolve a solution to a problem) in order to start predicting future versions of the virus.

While Ryan and Jingqi wrote and debugged the bulk of the program, Sophie and Angela focused on building the user interface as well as writing and creating the video to present their idea to Imagine Cup. The team coded their app using Visual Studio Community 2013 , available at no cost to students like you. 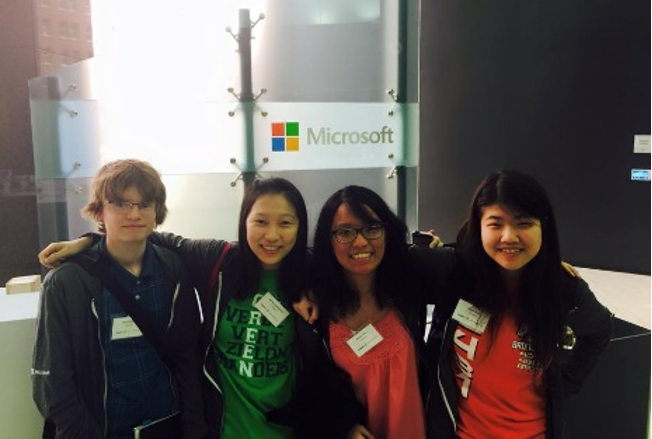 Though each of the students have different technological influences and levels of interest, they all agree that no matter how intimidating programming may seem, and no matter your age, it’s easy to learn. Whether you are writing your own OS at age 12 or love to play with the look of webpages, all coders start somewhere – and you can learn!

Team Centauri took advantage of several free tools Microsoft offers to student developers through Imagine. Check out some of the courses Sophie and Angela took at Microsoft Virtual Academy , like C# for absolute beginners . Jingqi educated herself about GitHub with Using Git with Visual Studio 2013 jump start .

Head on over to our new Microsoft Imagine webpage to access the tools and knowledge you need to create, code and develop your ideas. While you’re there, check out the nine brand new coding kits to help you write a game or app in 30 minutes.
0 Likes
Like