First published on MSDN on Mar 23, 2016
Spend five minutes chatting with the winners of the MakeMIT 2016 hackathon, and you’ll immediately understand their team name, "100% Enthusiasm"—plus, you'll get a dose of it yourself. 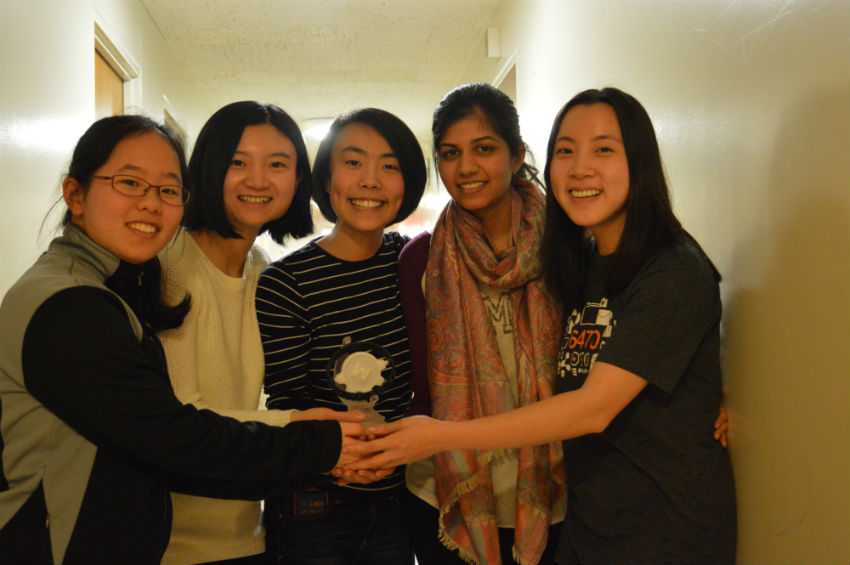 
MakeMIT is a hardware hackathon hosted by the Massachusetts Institute of Technology that is geared toward engineering and design students like Charlene Xia, Bonnie Wang, Jialin Shi, Chandani Doshi and Grace Li – also known as team 100% Enthusiasm. The competition consists of two phases over two weekends. Challenged to create something awesome using both hardware and software, the top 10 teams from phase one are invited to come back for the second weekend to refine their designs. From those top 10 teams at MakeMIT 2016, one enthusiastic team claimed the trophy.


No doubt fueled in part by their "best friends" status, the five energetic students work amazingly well together. But don’t mistake that friendship for fluff; Jialin, Chandani, Grace, Charlene and Bonnie, all juniors at MIT, pull no punches with each other.

The other girls laughed in the background as Jialin told us about how the group was brutally honest with her during the brainstorming phase. "We didn't know what we were going to do, so we were throwing out abstract ideas. The first idea I had was to make a dancing robot using a Kinect."

The other four team members gave her a resounding "no." Jialin, clearly amused, said, "They challenged me to think of something more unique, and I definitely appreciate them for that. It helped me focus on creating something more meaningful." 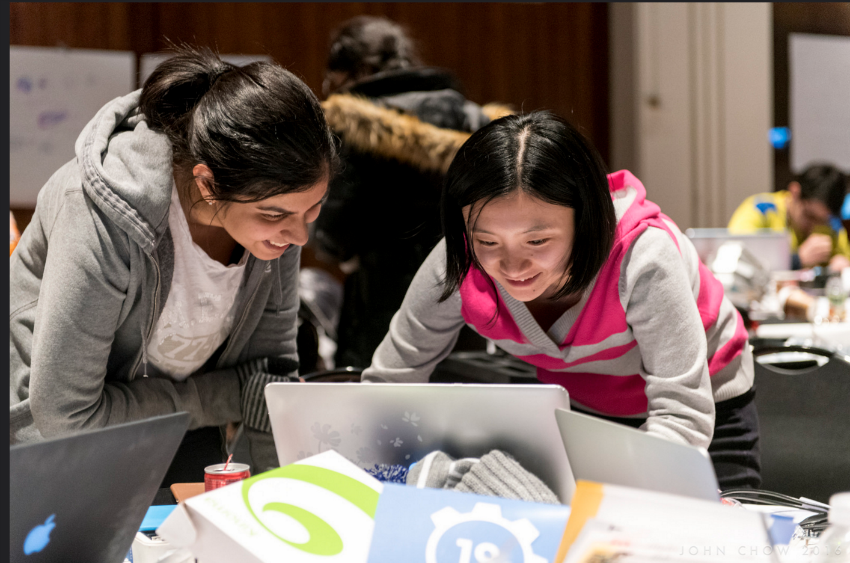 
The team members scoured tech blogs and zeroed in on a story featuring a braille watch created for the blind. They had found the "something with meaning" they’d been looking for, but what to make?

Grace described their moment of inspiration. "We found out that less than 1 percent of all books are available in braille. There is no product currently on the market that does text-to-braille translation. How has nobody solved this problem yet?"

The team decided to take on the problem itself.

The result is Tactile , a device that allows real-time conversion of printed text to braille. Though it's a prototype now, the potential impact of this device upon the blind community is profound. Braille-readers could potentially read any text ever written instead of being limited by braille-only content.

Tactile works like this: a handheld scanner takes an image of printed words on a page, and the image is converted to text using the Computer Vision API from Microsoft Project Oxford . The API returns a dictionary containing known words, which the team then translates into characters in Python. The characters are passed into Arduino , a board that reads inputs and turns them into outputs. In this case, the Arduino controls individual servomotors that move Braille pins up and down based on the letter. 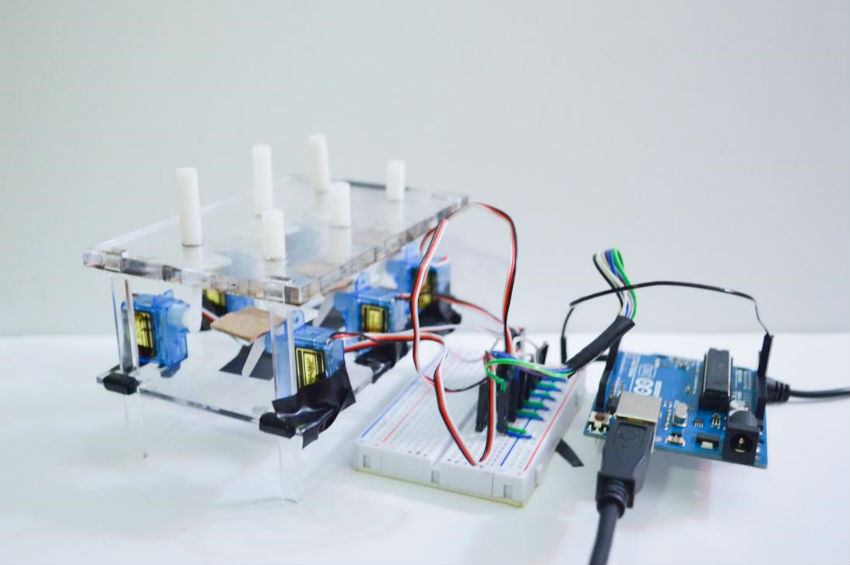 The first prototype of Tactile, a text-to-braille translator.


The project won first place at MakeMIT 2016, in addition to winning the Microsoft Best Hack Award for the team’s use of Project Oxford. Project Oxford is a collection of machine-learning APIs, from facial recognition to speech processing to language-understanding intelligence. The Computer Vision API that team 100% Enthusiasm used to build Tactile is a collection of image-processing algorithms designed to return information based on visual intake.

Chandani said the team chose Project Oxford because their original text-recognition API just wasn’t doing an adequate job of detecting pictures. "We'd used Tesseract from Python, but it was only good for screenshots, not images captured using a camera. After three more attempts on different APIs, I kind of gave up on image extraction."

That’s when James Sturtevant, Senior Technical Evangelist at Microsoft, checked in with the team. Bonnie filled him in on the team’s image-extraction dilemma, and James suggested the Computer Vision API in Project Oxford.

After a quick tour, Chandani felt relieved. "[Project Oxford] had the perfect tools we were looking for. It was very simple to use!"

One problem solved, a million more to go.

Grace spoke to the stress level facing the group. "We were pretty pressured the entire time. Our project did not come together until the last minute. There were periods in which we were just waiting for machined parts to arrive or trying to get an installed API to work, that made us feel very like we were not progressing forward. But at the end, when the first pins began to move to form each letter, having a working prototype was an amazing feeling."

The team plans to continue development and compete at MIT's IDEAS Global Challenge and is also one of 15 teams heading to San Francisco to compete in the U.S. Imagine Cup Finals on March 31 under the name Team Tactile . There, they will compete for $4,000 in the Innovation Category and a chance to go on to the Imagine Cup World Finals in late July in Seattle.

James Sturtevant talked to us about his admiration for teams like 100% Enthusiasm. “At Microsoft, we aspire to create more personal computing and to empower every person to achieve more. When I saw team 100% Enthusiasm’s project, I felt that it was truly bringing a more personal experience through the use of technology. It would allow access to information that is typically not available to the population of visually impaired people around the world.” 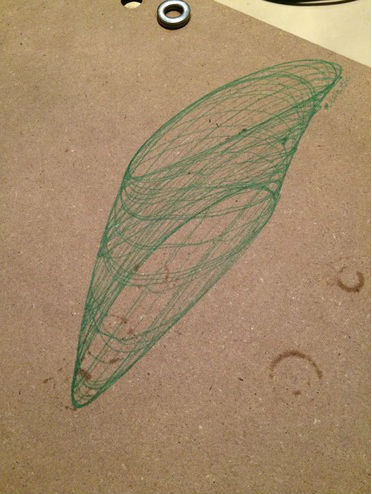 A finished piece of "heart-work" by team Heartonograph.


Meet another team that won the hearts of Microsoft sponsors and took one of the top 10 slots at phase one of MakeMIT 2016. Team " Heartonograph " consists of Sam Bishamber, Manuel Castro, Lucia Liu, Ben Reynolds and Justin Xiao. This group of MIT dorm-mates created a personal art device that draws personalized patterns based on the heartrate of the user.

Manuel told us how they came up with the idea of making an interactive art piece. "We wanted to explore the intersection between technology and art, an area sometimes underappreciated."

Users put on a Microsoft Band , download the Microsoft Health app and then pair the band with the phone using Bluetooth. Heartonograph alters the revolutions per minute (RPM) of the motors driving a mechanical arm to match the user's heartbeat. A pen is attached to that arm, which then draws the heartbeat data.

The result is art that is specific to a person in that moment. So, if a user is excited, they will produce a different art work than if they were calm.

Like team 100% Enthusiasm, the members of Heartonograph were friends prior to the hackathon. They all live in the same dorm at MIT’s Next House dorm and all of them have participated in MakeMIT before, so they knew what to expect this year.

Like expecting unexpected challenges. For instance, because they had to have working prototypes of all the systems (mechanical, electrical and computer) before they could assemble the device, they had to wait a nerve-wracking amount of time to see if their project would even work.

It worked, but the device was really wobbly.

Sam explained what she saw the first time the team turned on the graph. "The mechanical design of our project included surfaces sliding on each other using stepper motors. These stepper motors were very weak and were inhibiting smooth, continuous motion."

Justin gave advice to other hackers on how to deal with these challenges – just expect them. "You'll run into things you won’t expect, and part of the hackathon experience is working around these challenges and perhaps creating something innovative out of it!"
They scrambled, but eventually they overcame the wobble challenge with a bit of sandpaper and a ball bearing. In the end, they presented a device that drew perfectly smooth curves. No wobble. 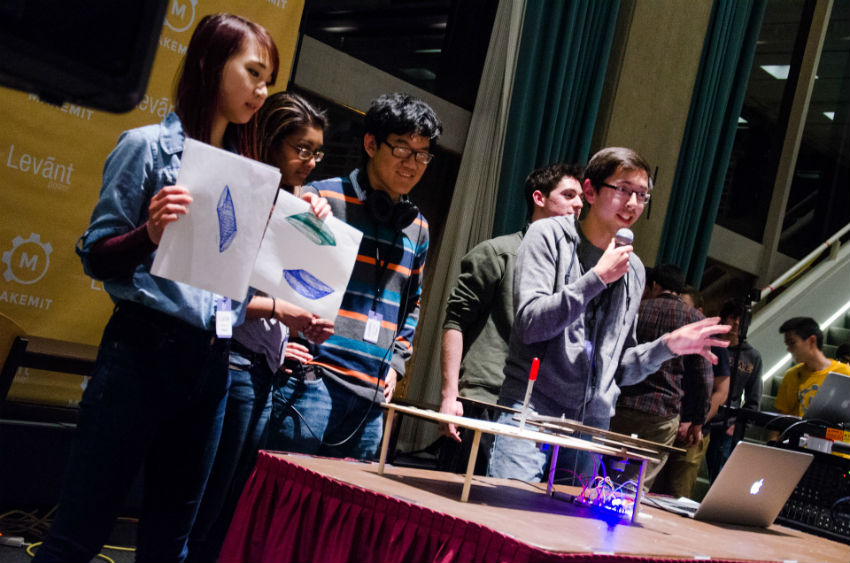 Team Heartonograph presents their interactive art project to the judges at MakeMIT 2016.


"It was a magical moment when we finally connected everything and it started drawing. We actually made something that we could see physically work, nothing is better than that," said Lucia.

The team caught the attention of Microsoft for its use of the Microsoft Band. Because the heart-rate data was the key to executing the final project, they wanted a wearable device that could track heart rates reliably and with low latency—well within the Microsoft Band’s capabilities.

Manuel summed up the true spirit of hackathons perfectly. "I am amazed by what people have created and even more excited by what has yet to be made!"

A little bit of enthusiasm, heart, and a lot of creativity can go a long way toward hacking something the world has never seen. Head over to the Microsoft Imagine Hackathon page for more info on hackathons near you.

And, if you want to see Team 100% Enthusiasm later this month, tune into the U.S. Imagine Cup Finals competition livestream starting at 10.30 a.m. PT on March 31. The winners of the Innovation, World Citizenship and Games categories will be announced starting at 4.30 p.m. PT that same day.