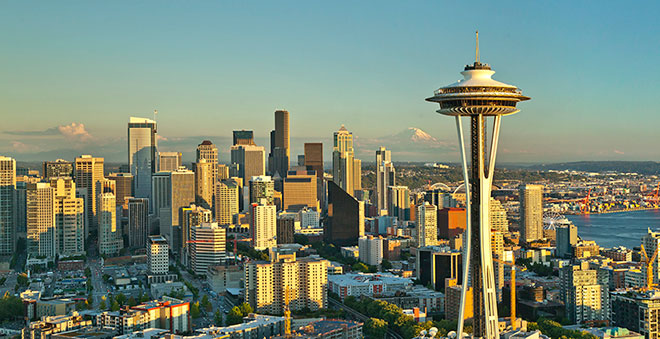 Well, it’s here – the news you’ve all been waiting for. For the second year in a row, the Imagine Cup World Finals will be held on Microsoft’s home turf of Seattle, from July 27 to July 31. This is an incredible opportunity for the teams moving on to the finals round of the Imagine Cup. Not only do they get to compete side by side with other global teams, they will be absorbing the energy and life of the Microsoft campus!

The opportunities don’t stop there: We are once again partnering with Microsoft Ventures , Microsoft YouthSpark and the Penny Arcade Expo (PAX) to bring unique Boot Camp experiences to each of the three category winners in Games, Innovation and World Citizenship.

World Finals will also be an opportunity for me to meet all of the competitors in person. My name is Pablo Veramendi and I’ll be taking over management of Imagine Cup from the inimitable John Scott Tynes, who has guided the competition with his steady hand since August 2012. John’s still on our team here at Microsoft Imagine and will be at World Finals, but I’m humbled to take on this responsibility and filled with excitement that we are bringing our top student teams to Seattle again. We’ve got some exciting announcements in the works that will make this year even bigger and better, and I can’t wait to share them with you.

So, let’s dive right in!

Eyenaemia , Estimeet and Brainy Studios , the three 2014 Imagine Cup category winners, have all returned from their boot camps and are busy digesting what they learned. They took time out of their very busy schedules to update us on their respective boot camp experiences.

As the 2014 winners of the World Citizenship category, Eyenaemia won the opportunity to come to Redmond, Washington and participate in the Microsoft YouthSpark Boot Camp. There, they consulted with Microsoft engineers, business development professionals and marketing staff to get guidance on how to move their project forward and really begin to make an impact. 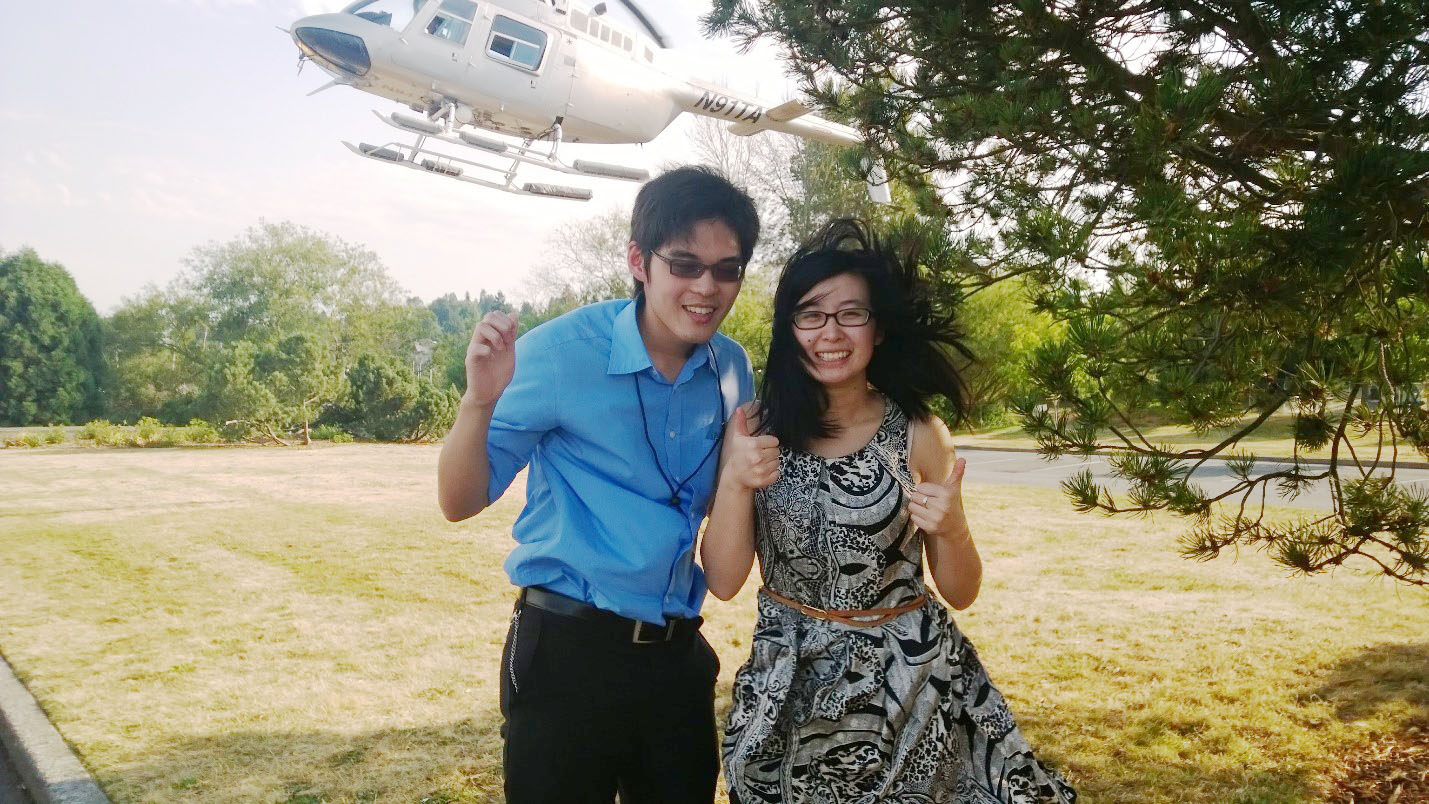 Eyenaemia co-founders Jennifer and Jarrel give a thumbs up after taking an exhilarating helicopter ride in Seattle.


Eyenaemia co-founders Jennifer Tang and Jarrel Seah met in medical school at Monash University in Melbourne. They came up with the idea for the prize-winning app, Eyenaemia, in their fourth year as students. Eyenaemia technology uses a photo of the human eye to determine a person’s iron levels.

In a kind of build-your-own-boot-camp style, the YouthSpark team worked directly with Jennifer and Jarrel to write Eyenaemia’s week-long itinerary. Even before they arrived in Seattle, the pair worked hard to come up with questions to ask the experts they would meet, to learn as much as possible. The YouthSpark team took those initial questions and matched the duo with various subject matter experts at Microsoft and other Seattle companies. Jennifer told us that it was humbling to see how many people took time out of their schedules.

That’s especially true of Bill Gates . As the 2015 Imagine Cup competition winners, Eyenaemia won the chance to meet Bill face to face. Jarrel says meeting Bill was “definitely the highlight of their trip. He was friendly and smart! He thinks a lot before he speaks, and he gave us a lot of useful information.” He told them to focus on research and to get as many people as possible in clinical trials.

And that’s just what they are doing now. Jennifer said, “We are concentrating on validating and getting more research done. We are visiting hospitals all over to get more photos of peoples’ eyes and get more blood tests to improve our algorithms.”

Estimeet, the 2014 Innovation category winners, won a four-week stay at the Microsoft Ventures London Accelerator. There, the New Zealand team was immersed in startup culture, getting advice on how to transform their social meet-up app into a profitable business. 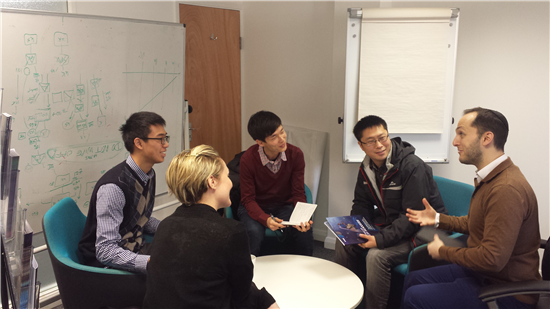 Jason Wei, Hayden Do and Chris Duan of Team Estimeet discuss accounting and other financial aspects of their budding business at Microsoft Ventures Accelerator London.

Hayden says, “The accelerator helped me to think differently and develop a different mindset. Through the program, I got to know the different aspects of a startup ranging from brand image, customer development to investor pitching. This allowed me to think more like a startup entrepreneur, rather than just a student with cool ideas.”

They are now back in New Zealand, working to refine the Estimeet app. Only this time, they are looking at it like savvy businessmen with real-world experience.

You can read our three-part blog series detailing team Estimeet’s time at the London Accelerator here .

We spoke to Evgeniy Romin, one of the team members from Brainy Studios, about the team’s experience at both PAX Dev and PAX Prime.

At PAX Dev, Brainy Studios was exposed to many of the industry’s finest game designers, programmers, and artists. Evgeniy especially remembers hearing Blizzard Entertainment discuss how “Diablo III: Reaper of Souls” was made.

“When we saw the level of developing skill, it only inspired us to work harder to become the best developers we can be,” he said. 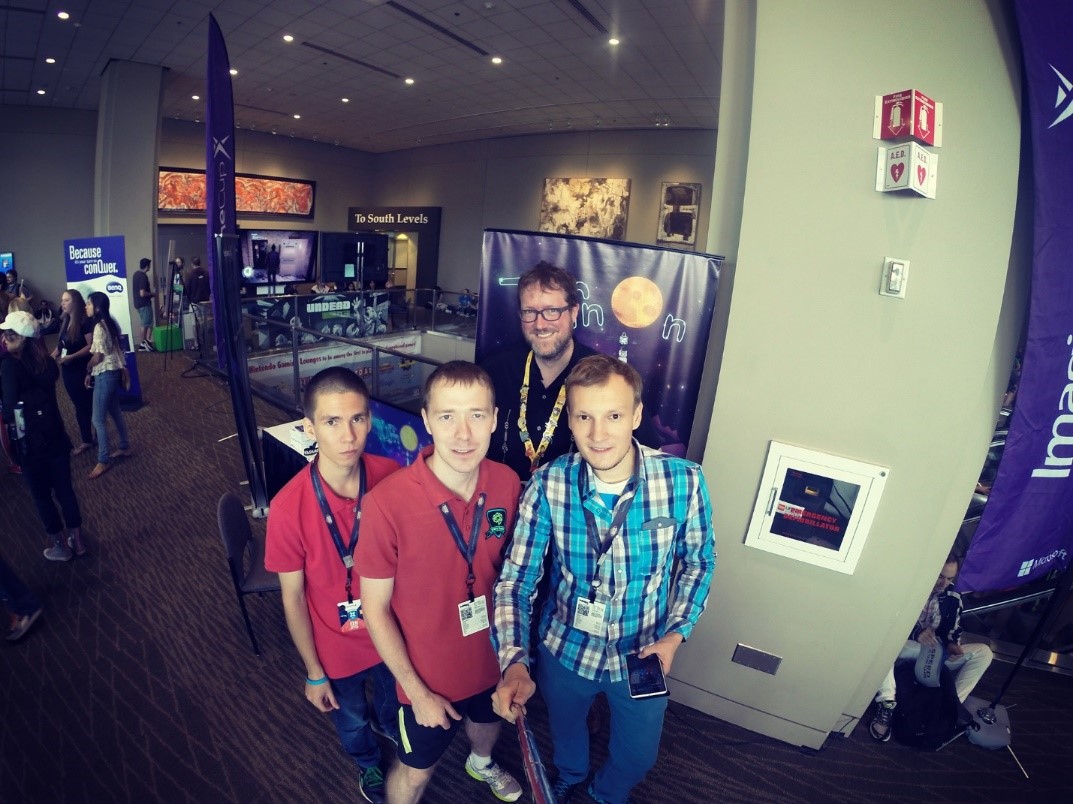 
What the team remembers most about PAX Prime is the extremely stimulating atmosphere.

“There were queues and queues of gamers everywhere. And lots of kids! Many children were playing our game,” Evgeniy said. “It was really cool when one child came to our booth every day to play and he wanted more levels. We had to tell the parents that we only had those levels written. He must have been only five-years-old.”

I’m truly in awe of what these teams have accomplished and can’t wait to see what they are going to do next. Boot Camps with leading experts in each competition category, mentorship with the world renowned Bill Gates, and the opportunity to live and breathe the “Microsoft” air in Seattle – it is experiences like these that make the Imagine Cup a life-changing opportunity for students all over the world.

Imagine how your life will be changed if you win the Imagine Cup! This is your opportunity to find out more about the Imagine Cup , the Boot Camps and, if you’re just starting out, the Code Hunt Challenge coding competition .

Sign up to participate in Imagine Cup today . Your idea could take you and your team to Seattle for the Imagine Cup World Finals July 27 – July 31.
0 Likes
Like