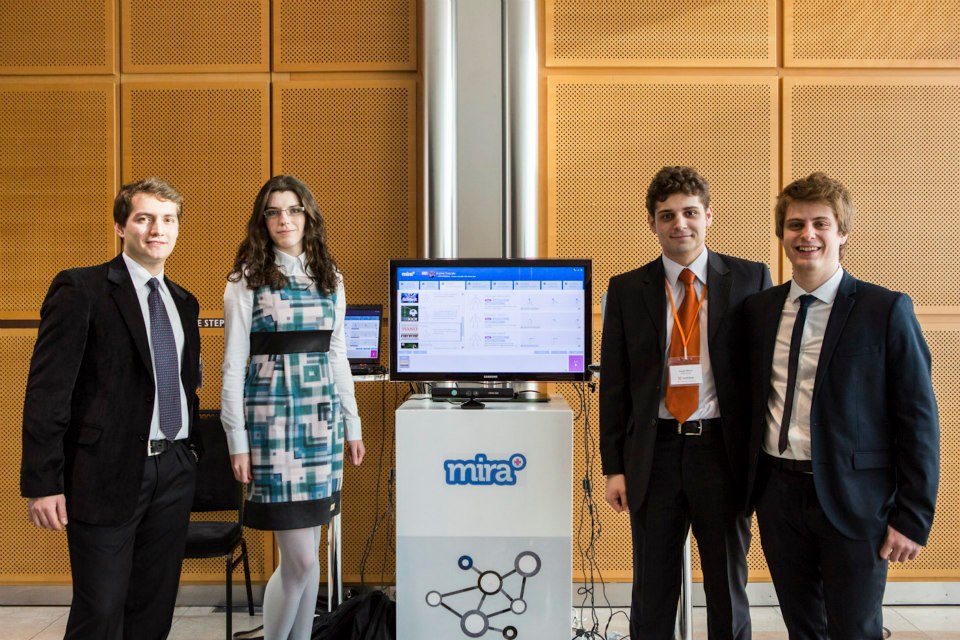 Throughout the year, we hear about exciting solutions designed by teams around the world during Imagine Cup . After the fanfare settles, we like to catch up with some of our alumni teams, check in, and find out how their projects are progressing.

We talked to Team Simplex, a group of students from Romania that created a solution to help patients in physical therapy. Since competing in the 2011 Imagine Cup, the team has launched a startup featuring their product and has exciting plans to expand.

Physical therapy can be a long, difficult and repetitive process and the team wanted to find a way to motivate people to do their exercises. Dubbed MIRA, (Medical Interactive Recovery Assistant), the solution uses Microsoft Kinect sensors that enable patients to play video games that incorporate rehabilitative exercises.

The four members of Team Simplex, Alina Calin, Andrei Cantea, Andrei Dascalu and Cosmin Mihaiu, met through the Microsoft Student Partners program at their university in Romania. When they heard about Imagine Cup, they all wanted to participate. They already had the project in mind but said the competition turned a daunting task into a possibility. Though they had little experience in software development, they used Microsoft tools and Microsoft DreamSpark , a program that provides access to software and tools for students at no cost, to develop apps on the Windows platform. The team created the solution with help from mentors on campus, entered the Imagine Cup, made it to the Semi Finals in Warsaw, Poland and later competed in World Finals in New York City.

“Our idea took shape as we prepared for Imagine Cup and took the first steps in implementing it,” said Andrei Cantea, the team’s Chief Product Officer. “Once the competition was over, we decided that MIRA could successfully address our identified market and we started the process to turn it into a business.”

The team started building a commercial product and used Microsoft BizSpark , a program that provides free software, support, and visibility to startups, to keep their development costs low. They launched the startup MIRA REHAB and the product is now being used in clinics throughout Europe. Though it is still in trial mode, about 40 patients are using it.

Team Simplex has been featured in Forbes magazine Romania, named a startup to watch by Tech.eu and one of the top 50 most innovative student-run businesses by the Kairos Society, an international nonprofit that helps to develop young entrepreneurs from universities around the world.

“We feel we owe much of our success to the competition,” said Andrei. “The software, mentorship, and feedback we received while competing in Imagine Cup helped us create a product from the ground up. Thanks to the exposure, we have plans to expand to a much larger market.”

All four founding team members now work on the project full time. They plan to commercially launch the product in the fall and then hope to sell MIRA to clinics and private users through direct sales and medical suppliers. They will first focus on the UK, where the company is incorporated, and then gradually extend to the rest of Europe, the Middle East, the US and Asia.

“Imagine Cup helped us understand how to make our project into a business and encouraged us to turn it into a sustainable company,” Andrei said. “Being a software company, we heavily rely on the Microsoft tools and programs we work with. If you have an idea, enter the Imagine Cup and go for it!”