Guess who thinks hackathons are important? Your future boss, that’s who!

Guess who thinks hackathons are important? Your future boss, that’s who!

First published on MSDN on Mar 24, 2016
Collaborative problem solving. Laser-sharp focus. Stressful deadlines. These are just a few of the skills required to hack it in the IT world. The students who attended TreeHacks , Stanford University’s annual hackathon competition, know that competing in hackathons is a surefire way to get a crash course in these hirable habits.

To kick off TreeHacks 2016, Matt Thompson, General Manager of Developer Evangelism at Microsoft and himself a Stanford graduate, inspired the student hackers to look beyond the weekend’s activities. He challenged them with a question: “Why hack?”

Here’s why: Future employers will look at a prospective hire’s devpost history, and it may carry more weight than a perfectly-curated résumé. The student hackers took Matt’s advice to heart. In a formidable display of creative and technical skills, students created projects with names such as HearVR, The Kinect Awakens, Pic-y Eats and Appception. These projects caught the attention of Microsoft sponsors and judges. 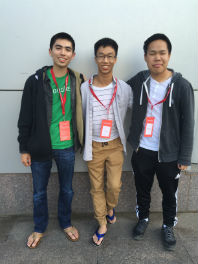 HearVR (pictured left) imagined a way to give music lovers a more immersive listening experience. Instead of simply hearing music, the three sophomore dorm mates thought it would be cool to actually see a song in motion.

Thus was born HearVR – a program that combines machine learning with virtual reality to create an environment where SoundCloud music files can be visualized on the Oculus Rift virtual reality device. Through the use of a frequency spectrum and data associated with SoundCloud’s user comments, HearVR helps users “see” music. The team consists of Max Spero, Christopher Vo and Jason Liu.

A great idea, but its genesis wasn’t without some panic-filled moments.

Like the point where Max spent 10 hours trying to get SoundCloud files to work with the Unreal game engine only to discover that Unreal doesn’t support the SoundCloud audio files. He had to learn and use the Unity game engine instead.

Hackathons present students with the challenging opportunity to learn new technology on the fly. Despite the team’s unfamiliarity with Azure, they found it easy to learn on the go during the hackathon. The final iteration of HearVR used Azure Machine Learning Studio to perform data analysis and publish the app as a web service. For their use of Azure, the team won the Microsoft Hack Award and each took home a Surface Pro 3 as well as a Microsoft IoT Kit for Raspberry Pi 2.

The HearVR app provides a visual representation of digital music to listeners through the use of a frequency spectrum and data associated with user comments. The more comments a specific music file receives, the more prominently that file registers on the spectrum.


The big payoff for the team came when the project was complete. Max was the first to try it. “It was just the coolest thing to see the song visually. It was so immersive,” he said.


“The Kinect Awakens” is a Unity-built video game by students James Lu, Angie Palm and Kate Tolstaya. James told us that he’d always wanted to play with lightsabers, so the team created a virtual reality way to do it.

Users put on the Google Cardboard virtual reality headset device and pick up a PlayStation Move controller. Suddenly a lightsaber appears in their hands and along with an ogre-like monster as their opponent.

The system works like this: A Microsoft Kinect collects the coordinates of the player’s head and hands in 3D space. The PlayStation Move controller and the intertidal measurement unit (IMU) of the phone provide the orientations of the camera and weapon, which are then visually rendered on Google Cardboard using the Unity game engine. Google Cardboard has similar functionality to the Oculus Rift, but looks like a cardboard box.

Once the team got the data to visualize in Unity, they were overjoyed. The app worked perfectly.

Though it was their biggest challenge, James said “getting so many individual components working together was really cool.” 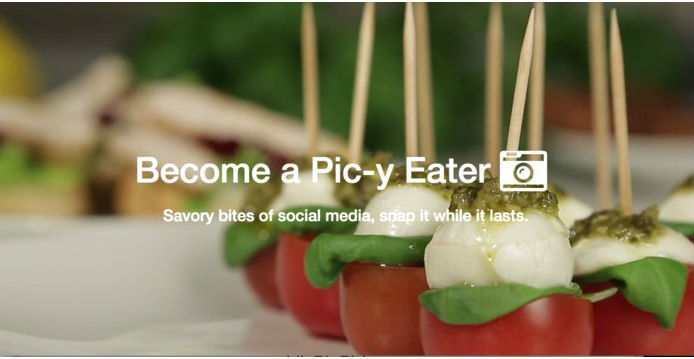 Pic-y Eats aims to tap into the food-obsession present in social media.


Raya Kuo, Vivian Fang and Michael Meng created Pic-y Eats , a social media app that generates a food-related theme of the day and then gives users a randomly-selected two-hour time window to upload food photos of that theme.

Raya Kuo explained the app’s inception. “Instagram, Snapchat and Facebook are dominated by pictures of food. We thought it'd be fun to generate a daily goal where users post photos only of that specific food for the day.”

Like the HearVR team, the Pic-y Eats were Azure neophytes. However, with the help of Microsoft Technical Evangelist Tim Reilly, they were able to get their app up and running on Azure. By then, it was nearly 3 a.m. on Sunday, so they all took a short snooze.

Raya described the dramatic push to finish. “We woke up Sunday only to find that the Azure server times had changed overnight, exposing a bug in our code. Expo was in three hours, so we rushed to fix the bug, finish our DevPost descriptions and prepare our presentation pitch all at once.”

Despite the stress, the Pic-y Eats team had a finished product to show. “We made a video demo and also interactively walked audiences and judges through the user experience, which made it easier for them to understand the idea behind Pic-y Eats. They were very intrigued.”


If you’re a developer, you’ve probably been in this scenario – someone comes up with an awesome idea for an app – and asks you to make it. Or, they shrug it off because they aren’t a developer or don’t know one. 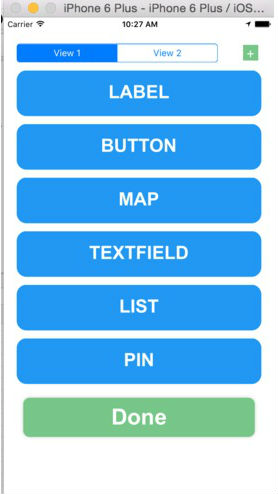 Antonio described the team’s idea. “We wanted to build the simplest possible developer experience, something our non-technical friends can use when they come to us saying, ‘I’ve got an idea for an app that's going to be the next big thing!’”

Appception (screenshot left) allows anyone to build native iPhone apps using a drag-and-drop interface. Appception actually hosts an app inside itself (hence the name, a riff off of the movie “Inception”), the one the user is building through the interface. And in fact, this was the biggest challenge. “Ensuring the separation of the apps was the main difficulty,” said Antonio.

Antonio knew it was an ambitious project for a thirty-six-hour hackathon. The team struggled to find teammates for this very reason, but right when they considered changing their idea, Sam arrived. His flight had been delayed, so he wasn’t around when the team was recruiting hackers. He loved the idea though, and the team began hacking.

The team used the magic of Azure Virtual Machines . Antonio said, “We needed to run a program on a remote server that would take the information about the new app and generate the source code for it. We chose to host this program on a virtual server in Microsoft Azure. The process of setting up this server was easy and straightforward, even though it was our first time using Azure. We just grabbed an off-the-shelf configuration from the Azure Marketplace.”

Once everything finally came together and worked as intended, Antonio felt proud of the team for not giving into their own fears associated with tackling such a challenging idea. He explained, “One thing I’ve learned by attending hackathons is that the best hackers are not afraid to aim for building a complex project. We all were very excited that we could finally use what we had spent the past two days building.”

Want to learn more about how competing in hackathons builds the skills and habits that hiring managers find invaluable? Head on over to the Microsoft Imagine Hackathon page . Don’t have the time to participate in a hackathon, but still want to build something cool leveraging cloud technology? No problem. Check out our free Microsoft Azure offer for students.