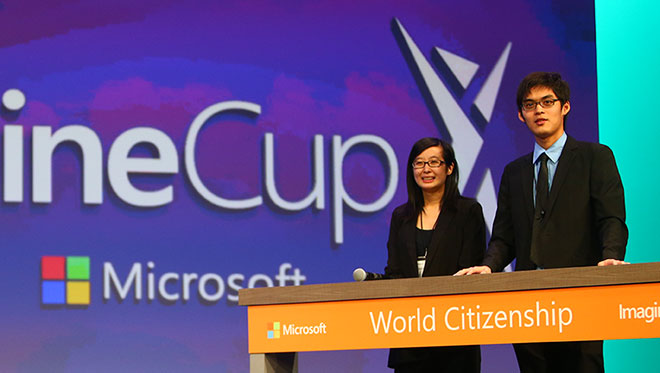 Eyenaemia , comprised of Jarrel Seah and Jennifer Tang, were the 2014 Imagine Cup World Champions , winning first place in the World Citizenship competition, and then taking the overall win in head-to-head competition with the Innovation and Games teams. This post originally appeared on Eyenaemia's website . You can read the original post here .

Almost immediately after the 2014 Imagine Cup season rounded off in Seattle in early August, the 2015 season began. If you are reading this post then you are probably considering competing in the 2015 Imagine Cup. Our first piece of advice is do not hesitate and jump in. Compete. The competition challenges you to think about what you need to do to bring your idea to market. It is an invaluable and memorable experience that can be life changing.


Teams of up to 4 people can enter the Imagine Cup. There have been teams of all different sizes who have entered the Imagine Cup and succeeded from teams of 1 up to 4. There is no magic formula to forming a team but one important aspect that we believe in is passion. The Imagine Cup is a journey and it’s a year-long commitment. You need individuals who are invested in your project and willing to see it through step by step despite any challenges that you may face. You need to think of your team as co-founders. These are the people that you may by the end of the competition be setting up a business with. Think about different skill sets, experiences and how each member may be able to contribute to the team.


Whether you have had your idea waiting in the wings for years or whether you’re brainstorming ideas to enter the Imagine Cup you need to be prepared for your ideas to evolve over the course of the competition. What you think of initially will most likely not be what you end up entering. It is important to have a reason for doing your project. The reason may be personal or the reason may be because you found a problem that you would like to solve with technology. Getting advice early on is also invaluable. This may be talking to experts in different fields, to potential customers, or your family about what they think of the idea. This will enable you to fine tune your project to ensure that it meets the needs of your market. Research what is available out there already – is there something similar out there to what you are thinking? Are there ways that you can improve on what is currently been done? Don’t be dismayed if something that you thought of has been done. It means that it is a great idea!


For some groups it will be an easy choice on which one to enter, for others you may find that you have a mix between the too. We recommend that you have a look at the score breakdown early on to see which category your projects fits better in.


The UX challenge was also an excellent time to brain storm ideas and identify how we wanted our user to interact with the app. As many of you would know, UX can be a critical component in whether or not a solution will be popular or not. Users want something intuitive. Therefore it is important to think about UX right from the start. The UX challenge gives you the opportunity to do so. It’s important to realise that the entries into these challenges are in no way binding on your final project, and should be seen as an opportunity to iterate over your concept and design.


The best part of the challenges though is the feedback. If you are in the top 10 in your category you will get feedback from experts. This helped us a lot in shaping our project and getting our entry ready for the national finals.


Next you will compete in the National Finals. This may be a different project or the same project that you submitted for the challenges. If you do get the opportunity to get feedback from those challenges we highly recommend that you use this feedback to help with your applications. The National Finals criteria differ depending on your country so make sure that you know what you’ll need to submit for your National Finals.


The winners in each category in a National Final move into the World Online Semi-Final. This requires you to submit a project proposal and a video of a presentation. This is where getting involved in previous challenges really helps.


Our next post in this series will be about tackling the Imagine Cup’s Project Blueprint Challenge! Later, we will also discuss tips on how to rapidly make something even if you haven’t made anything before. Follow us on Twitter and Facebook to keep updated.