These are not exactly the words you’d expect to hear upon entering a 4 th grade classroom. But guest speakers John Shewchuk and his 17 year-old daughter, Annaka, don’t seem the least bit surprised. It’s like they are used to speaking in code. This dynamic duo has volunteered their time to facilitate the Hour of Code. 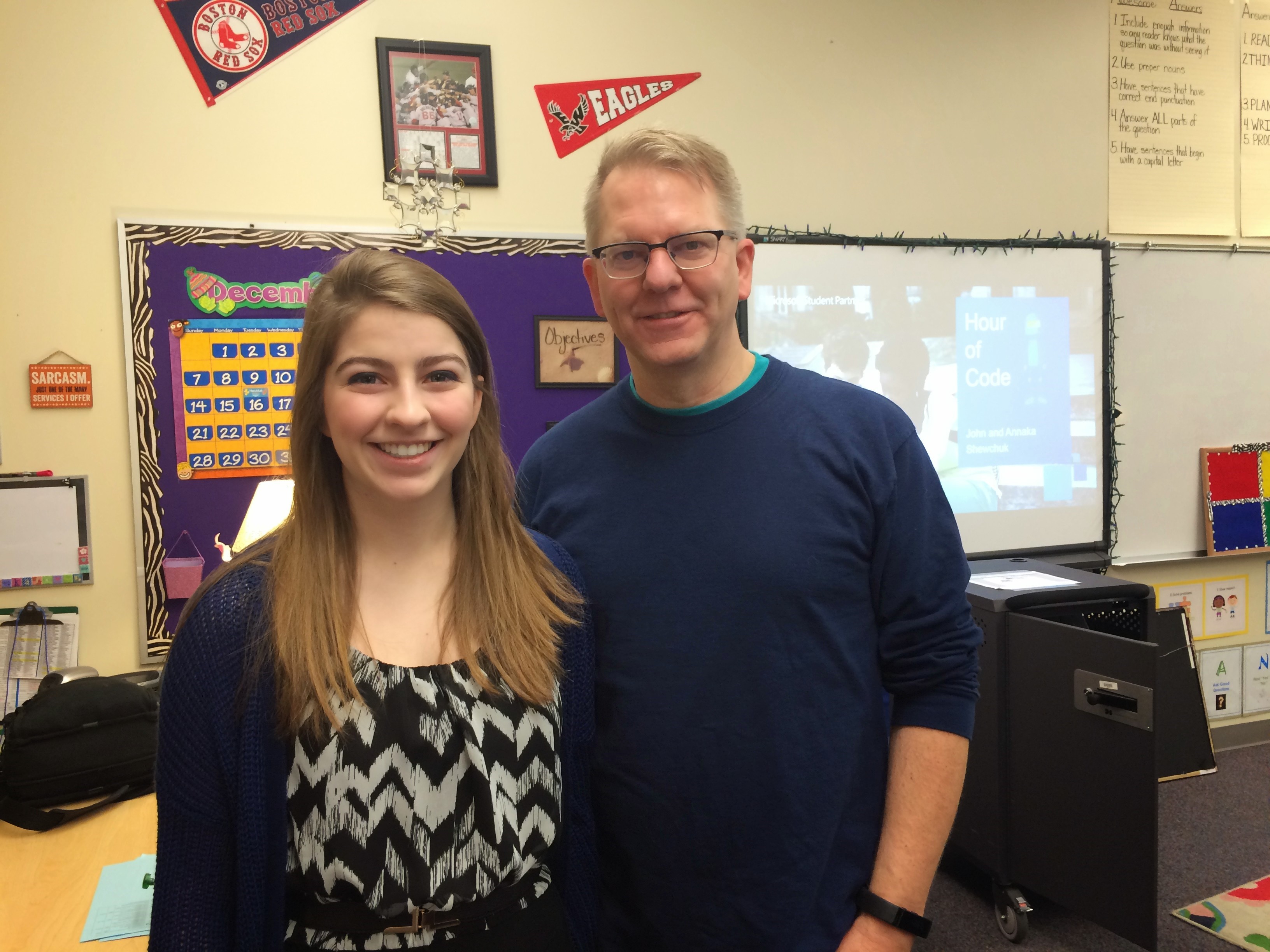 Annaka is a bit of a superstar, but she’d be the last to admit it. Somehow both shy and self-possessed, she greets the students of Kate Fleming’s 4 th grade class at Newport Heights Elementary in Bellevue, Washington, with smiling eyes. Not only did she found a summer internship program for high schoolers called STEM Labs , she and others have created pretty impressive apps - they even partnered with Microsoft to do some work on advanced web tech... . You know, because they were bored.

Annaka’s dad, Microsoft Technical Fellow John Shewchuk, is obviously an elite, professional developer. But if you didn’t know he was a father of four, you’d wonder why he’s so good at speaking to kids about code in a way they can understand.

And the truth is, these kids understand a lot already. They zip around computers like programming is their first language. Their daily learning already has a good amount of technology sprinkled into it (they use xtramath.org every day).

They ask impressive questions, too. When John asks what objects operate because of code, they know the answers – and aren’t shy about letting you know that they know. “Cars! Radios! Watches! Video games!” Encouraging their answers, John also adds that code is everywhere – it exists in more than just computers, phones and apps. Code is limited only by the imagination.

Annaka and John release the students to begin the Hour of Code ‘games.’ And this is what is genius about the whole thing; the kids are all engaged and coding without actually knowing it. As far as they are concerned, the coding is almost like playing video games during class. Annaka and John walk around the room, responding to requests for help. Some students have chosen to work on more advanced coding for games, and request John or Annaka’s help to complete the levels, which get harder and harder.

But they seem to love the challenge. The games are a big hit with all the students; not just the over-achievers, and not just with boys. Everyone can do it, and their wiggling bodies reveal just how easy and fun it can be.

The room is filled with phrases that all teachers dream of hearing:

“I want to do more cool stuff! Show me how.”

As the lesson finishes, Annaka shares some of her recent animations (yep, she coded those too). “If you’re bored, instead of playing a video game, make one.” You know, because it’s easy and fun!

If coding becomes part of the everyday curriculum for kids like this, for them, it will be.

If you want to explore the world of coding, be sure to check out Microsoft Imagine at imagine.microsoft.com . There, you’ll be connected with the tools and knowledge you need to create, code and develop your ideas.

Also, if you’d like to teach an Hour of Code to your favorite aspiring developer, or participate in one yourself, head on over to Channel 9, where you’ll find a library of tutorials , as well as this on-demand version of an Hour of Code taught by Microsoft Technical Evangelist Susan Ibach and Sage Franch.
0 Likes
Like