The increased number of cores per socket is driving NUMA designs and in SQL Server support we are seeing more NUMA machines and less pure SMP machines.    For whatever reason over the past 2 weeks I have fielded a bunch of questions around NUMA and the information is good for everyone to know so I will try to share it here.

There are various levels of NUMA configurations that can make the this entire discussion complicated.  I will try to point some of these things out here as well.

How is the Operating System Presenting NUMA Configuration To SQL Server?

Select a process, Right Mouse | Set Affinity -- the following dialog is presented showing you the Processor Groups (K-Group), Nodes and CPUs on the machine. 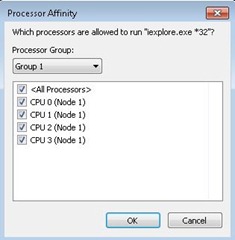 This is the layout presented to SQL Server. 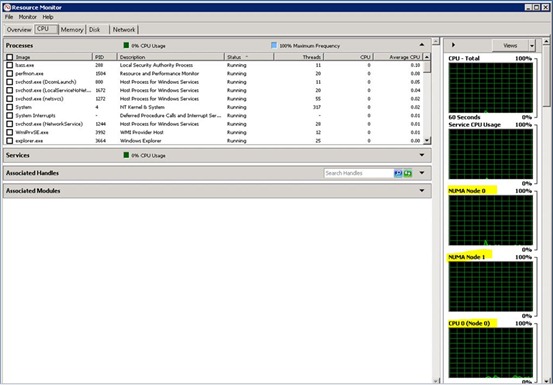 Information presented in MSINFO does not contain NUMA associations.   Here is an example from my 2 socket system with only a single memory node.

Here is an example of my 2 socket system, single memory node but configured using bcdedit /groupsize to create 2 logical groups on my system for testing.   The MSINFO32 output looks the same and you can't tell NUMA information from it so don't rely on it for NUMA configuration information.

Issue: The problem with all the previous Windows utilities is that it might not be showing the physical layout presented by the hardware. You may have to go to the BIOS or use the CPUID instruction(s) to determine the physical layout.

Windows does allow configuration of /groupsize for logical testing ( http://msdn.microsoft.com/en-us/library/ff564483(v=VS.85).aspx using BCDEDIT or manual establishment in the registry http://support.microsoft.com/kb/2506384 . However, it is rare to see these in use on a production system.

When SQL Server starts up is outputs the NUMA information in the error log detailing its view of NUMA and provides DMV outputs to show the information as well.

Here is the output from my 2 Processor Group system.  A NUMA node can't span a processor group so I am assured to have 2 NUMA nodes with CPUs associated with each node.

The mask for Node 0 shows 0xf which is 4 CPUs associated with the node.   This is correct as it is a 2 socket, 2 core, HT aware system (8 total) 4 assigned to each node.   The :1 is the processor group the node is associated with.

Notice that Node 0 is assigned to group 1 on my system.   This is a bit different if you look at the low level details.   SQL Server swaps its tracking of node 0 to play better with the overall system.  Since the system usually allocates things on NUMA node 0 during boot, SQL Server tries to move its node 0 to a subsequent node to avoid contention points.   Thus, in my case I see the groups appear to be swapped but that was really just a node swap and instead of SQL Server node 0 being associated with group 0 it is associated with group 1.

SQL Server distinctly tracks memory nodes and scheduler nodes and these don't have to be the same.  (See SOFT NUMA for more details).

You case the scheduler alignments to the scheduling nodes using the following DMV query.

I point this out because when you use SQL Server SOFT NUMA configuration it does not change the memory node tracking of SQL Server only the scheduler node behaviors.

I have a non-NUMA system and SQL Server Still Shows NUMA - why?

Answer: Expected - One of the most common questions I get and here is why.

SQL Server (SQL OS) is designed to work with groups, nodes and CPUs.   To create an ONLINE scheduler for SQL Server it has to be associated with a scheduling node structure so even on a system that is not-NUMA SQL Server will track the schedulers under a single node.  It is just design but it can fool you a bit and some of the wording choices add to the confusion as well.

Here is an example from SQL Server Management Studio (SSMS) from my single socket, dual core system.    Notice that 'NumaNode0' is shown.   It is just a poor choice of wording and is exposing the same node 0 that SQL Server is using when you look at the DMVs for tracking the CPUs on the system within the scheduling node.   Everything is technically correct that we have a single (1) memory bank associated with all the CPUs on the system.

Here is the same SSMS view of my 2 socket, 4 core, 2 memory node system. 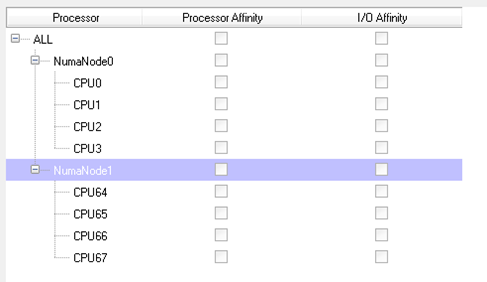