Turn on suggestions
Auto-suggest helps you quickly narrow down your search results by suggesting possible matches as you type.
Showing results for
Show  only  | Search instead for
Did you mean:
Unable to execute a remote stored procedure over a linked server
By

Unable to execute a remote stored procedure over a linked server 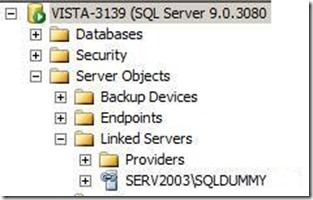 When I tried to execute a stored procedure:

Could not connect to server SERV2003\SQLDUMMY ' because '' is not defined as a remote login at the server. Verify that you have specified the correct login name.

I checked the Security settings of the linked server and it was set to “Be made using the login's current security context", which is valid considering that the user has all the permissions to login to the remote SQL server.

Then I changed the security context to use a SQL authentication, but still it failed with the similar error message as described above. To troubleshoot this further, I ran the query select * from master..sysservers and here's how the output looked like.

Now this field isremote caught my attention. So what does this value isremote mean ?

What does this mean in terms of a valid setting to execute a stored procedure over a linked server?

Another interesting that I stumbled across while working on this issue is that in a SQL Server 2000 scenario, the isremote column values are inverted.

Once again running the query, select * from master..sysservers shows the results as below :