Turn on suggestions
Auto-suggest helps you quickly narrow down your search results by suggesting possible matches as you type.
Showing results for
Show  only  | Search instead for
Did you mean:
The week that was PASS 2011 & Moving on…
By

This is to recap my week at PASS Summit 2011.  This was my 4th US PASS, and every year it is amazing.  I really enjoy sharing information with the community as well as getting to meet the people I talk to on Twitter and in other areas.  Between Technical and Social Networking, this really is a great event.  There were a lot of people at PASS this year as well.  This was the first year that I’ve noticed an overflow room for the Key notes and it was filled.

The big announcement this year was that we officially launched the Product Branding for SQL Server 2012 and stated that it will be released in first half of next year.  Project Crescent also was named Power View.  They showed this video during one of the keynotes, and I thought it was a really well made video clip discussing some testimonials of the new features.


This year we had our normal CSS Pre-Con done by yours truly, as well as a 3 hour main con talk that Bob Ward did.  We also had Keith Elmore doing a talk about the new Performance Dashboard that will ship with SQL Server 2012.  I found out that Performance Dashboard has been one of the biggest downloads for the Microsoft Download Center.  I hadn’t realized that.  Cindy Gross also Presented a SQL talk.  I wasn’t going to do a main con talk this year, but one of our presenters had to miss the summit due to medical issues and I had a talk on standby that I had presented at SQL Saturday.  I found out the Sunday I landed that I would be doing that talk.  It was a high level walk through of Reporting Services. 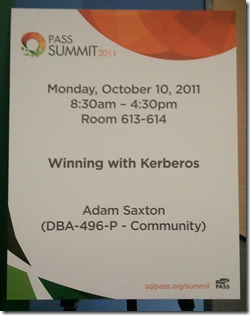 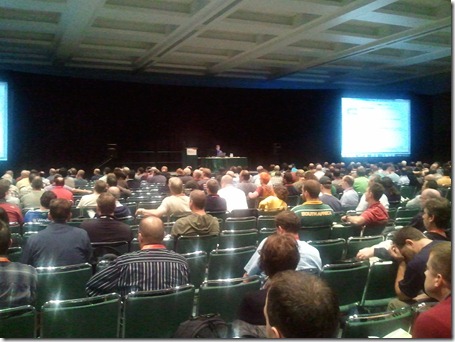 
The Clinic this year had a great turn out as ever.  I think this year, we also had a much better showing on the CSS side.  I think this was in part due to the awesome schedule that Chris Wilson and John Gose put together.  It seemed to work out really well.  We got a lot of different questions spanning the enter product line as usually.  The big theme this year was Replication though.  on Wednesday it seemed that every other question was something about Replication.  I did my part to tout the new SQL AlwaysOn feature that will be in SQL Server 2012.


One attraction that was new this year was the SQL Kinect Demo!  It was a fun mock setup of some Management Studio interactions with SQL Server.  For example, on one screen, a touchdown like movement would create a table or database.  Everyone had a blast with this. 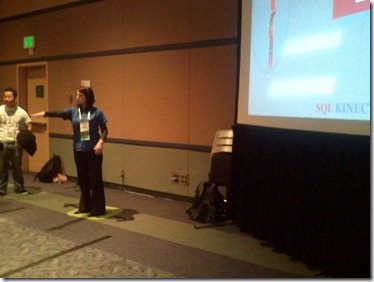 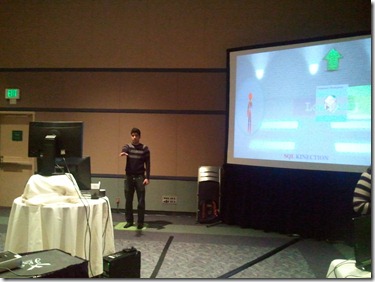 
As mentioned, the social events and just time to meet and greet with people attending PASS was great.  There was always something going on every night.  This year was my first year at a SQL Karaoke event.  To illustrate the power of Social, myself and 2 friends arrived at the Karaoke bar.  There was really no one there at 9:15 after the last crowd left.  We decided to get on twitter and start telling people to come using the #sqlpass and #sqlkaraoke twitter hashtags.  Within 15-20 minutes we had about 60-70 people there and had a blast.  It was really amazing to witness that.


Food is also a great experience at PASS.  At least with some of the restaurants that we end up going to.  Like the Crab Pot that just dumps a bunch of sea food on your table.  And, the massive deserts that you get! 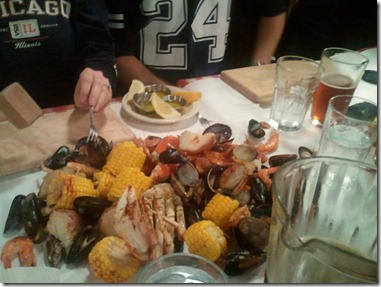 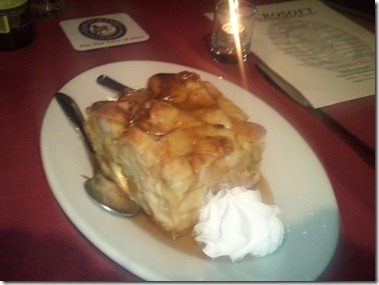 
Unfortunately, I did not get to participate in the SQL KILT event on Thursday.  I really wanted to, but things didn’t work out.  This year they had a backup for everyone that didn’t get a kilt though. 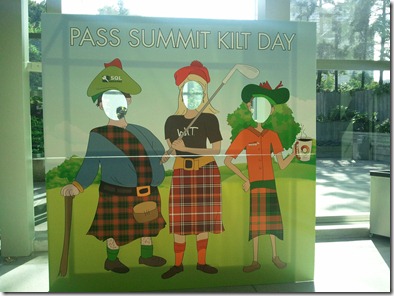 
I wasn’t really advertising this before, but it came out a lot at the PASS Summit.  I have actually left the SQL Support group and am now with the Health Solution’s Support Group.  I’m now supporting products like HealthVault and Amalga.  There were a lot of reasons that led me to this decision, but one thing I weighed heavily was the SQL Community and the fact that it is really awesome and I have meet a lot of great people.  PASS is one of those events that I have come to love and it has felt like a family reunion to me (minus the drama that happens at family reunions!).  Our Health Products are really great and I’m looking forward to the new adventure that awaits there.  There are a lot of great opportunities with this group and I hope to bring some of the Social and Community Passion with me.


You can continue to follow me at my new blog - http://blogs.msdn.com/hsgsupport .  Also, be sure to check out http://www.whatsnextinhealth.com !