Turn on suggestions
Auto-suggest helps you quickly narrow down your search results by suggesting possible matches as you type.
Showing results for
Show  only  | Search instead for
Did you mean:
SQL Server 2008 Express, .Net Framework 2.0 SP2, and 3.5 SP1 explained...
By


Many of you may have read my post about dependencies with Visual Studio 2008 SP1 and the .Net Framework 3.5 SP1 and SQL Server 2008. I have some related information to provide to you about SQL Server 2008 Express.

If you are a user of SQL Server 2008 Express, there is some new information you should know about. I created a separate post here because the other post was getting pretty big and this information is something specific to SQL Express SKUs so didn't want it to get lost in the message.

On this page it says:

Also on this list is the requirement to install Windows Installer 4.5 . Be sure you have completed both of these steps first before installing SQL Express (any edition).

Since SQL Server Management Studio ships with SQL Server Express 2008 with
Tools and SQL Server 2008 Express with Advanced Services , the requirement is you must have the complete .Net Framework 3.5 SP1. So for these editions, you may get a dialog box error like this:

For all Express editions, if you don't have Windows Installer 4.5 installed, you will see a dialog box like this:

If you don't have it already installed, you will need to install Windows PowerShell 1.0 only if you are installing SQL Server Express 2008 with Tools or SQL Server 2008 Express with Advanced Services. If you don't do this, you will get into several screens of the install and setup will fail with the following rule: 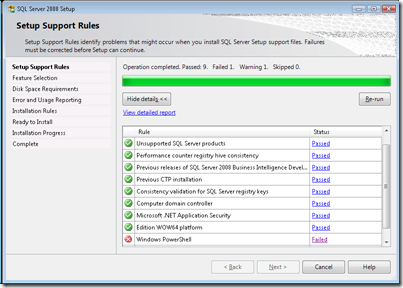 The good news is that you can go ahead and install PowerShell while on this screen and re-run the rule check to proceed with setup.

A few other comments about this issue and SQL Server 2008 Express packages in general:

1) We don't automatically install .Net 3.5 SP1 and Windows Installer 4.5 (as we do with other editions of SQL Server 2008) because we are trying to keep the size of our install packages for Express as small as possible.

SQLEXPR32_x86_ENU.exe - This contains 32bit binaries only. If you are only installing on a 32bit operating system, use this package.

SQLEXPR_x86_ENU.exe - This contains the same binaries as the 32bit only package plus some x64 binaries so that you can install SQL Express in a WoW environment. Use this package if you want to install SQL Server 2008 Express 32bit on a 64bit operating system.

3) When you install SQL Server 2008 Express with Tools you may be confused when you see some of the setup screens say "Express with Advanced Services" like this following feature screen selection (you may also see this on the Product Key screen): 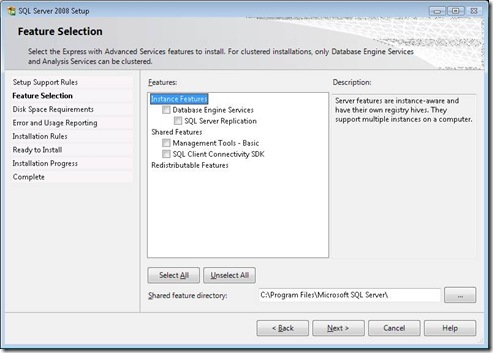