Turn on suggestions
Auto-suggest helps you quickly narrow down your search results by suggesting possible matches as you type.
Showing results for
Show  only  | Search instead for
Did you mean:
Power View display issues with Page Viewer Web Part
By


I ran into two separate issues this week that both dealt with displaying a Power View report through a Page Viewer Web Part within a SharePoint page in SharePoint 2013. The resolution to both were the same, so I thought I would lump them both into this post.

The first issue was that some of the client machines were browsing the page within Internet Explorer 8 & 9.  When they did this, and tried scrolling the actual page, they saw some video artifacts and it didn’t look right. 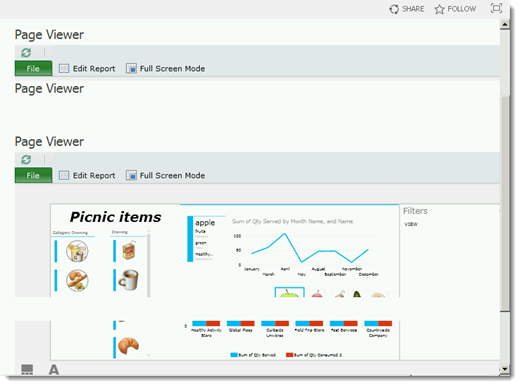 The second issue dealt with the Managed Navigation feature within SharePoint 2013.  The navigation looked fine when on a normal page.

However, when going to the page that had the Page Viewer Web Part on it that hosted the Power View report, the menu would get cut off.

Within SharePoint 2013, there is a web part called the Silverlight Web Part. Switching over to use this Web Part instead of the Page Viewer Web Part corrected both issues that we were hitting.

There are two main configuration points for this web part to get it to work, outside of the visual settings like height and weight. The first is the Application Configuration area. 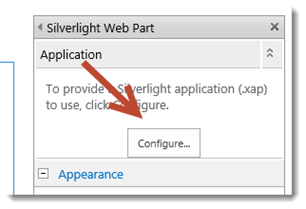 The relative URL to the XAP file is the following for Power View.

The other setting is under “Other Settings” called “Customer Initialization Parameters”. 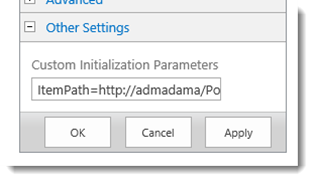 It should be something similar to the following.

Admadama was my site URL, so you would need to adjust that along with the path to your Power View report.

After that was setup, we no longer saw any artifacts when scrolling the page, and the menu navigation looks as expected.