The following is a question we have received from a few folks who were concerned after installing SQL Server 2008 that they did not have the final released build. When you use SQL Server Management Studio and select the Help/About menu choice to see what version you have, you may see something like this: 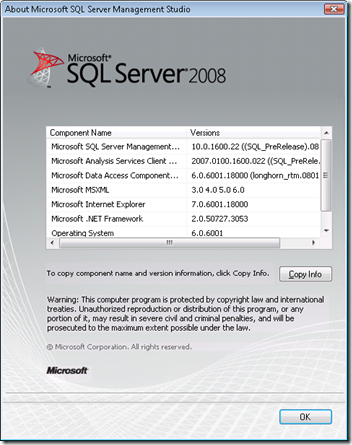 Notice the Versions column and the string for the first and second "rows". It says 10.0.1600.22 ((SQL_PreRelease)... So what does SQL_PreRelease mean? Don't I have the "released" SQL Server and not some pre-release? The string SQL_PreRelease is just an internal name we use for a branching and directory structure as we built the product. It does not mean a pre-released version of the software. If the version says 10.0.1600.22 then you have the the final RTM product installed on your computer.

In fact, the official @@version string looks like this on SQL Server 2008 RTM x64: