Normally when you see high isolation level such as SERIALIZABLE is used, your natural instinct tells you that it may cause blocking or deadlocking.   But you may be surprised to know that it actually can cause high CPU as well.  When you use SERIALIZABLE or REPEATABLE READ isolation levels, even shared locks can’t be released until the transaction is committed or rolled back.  This can cause large number of locks being held at any given time.    Granted that inappropriately managing transaction in read committed isolation level can also cause large number of locks being held, this generally accumulates locks other than shared locks.

Large number of locks at server level can cause  a query with exact same plan  consume more CPU than normal.   The reason  is that in order for SQL Server to grant a lock request, it has to traverse internal structures to figure out who owns what.  When number of locks becomes large, it takes time and CPU to figure out who owns what even the request may not have any conflict and eventually results in a grant.

Below is a chart of data from an actual customer.   The green line is lock memory (KB) and red line is total CPU (%).   That’s right!   Lock memory reached to about  9.9GB at one point.  During the period of high lock memory, you see sustained period of 100% CPU.  There was some dip in CPU periodically. Those were actual times of blocking.  But during periods with 100% CPU, we noticed a particular query would consumed 30 seconds of CPU per execution whereas it only consumed 0.3 seconds of CPU with exact same query plan.  This is because of high number of locks.  As more request piled in, server became totally non-responsive.

Upon further look, we discovered that the procedure used SERIALIZABLE level and there were insufficient indexes.  As a result, every execution would need 1/4 million locks being held until end of the procedure execution.   So the system would work fine with a few concurrent executions.  But as more concurrent requests come in, this was no longer linear increase of CPU consumption. It’s actually exponential because more and more locks were being held.  Long term, this application needs to evaluate if SERIALIZABLE is truly needed.  Lucky enough, we were able to find a good index and dramatically reduced lock required. 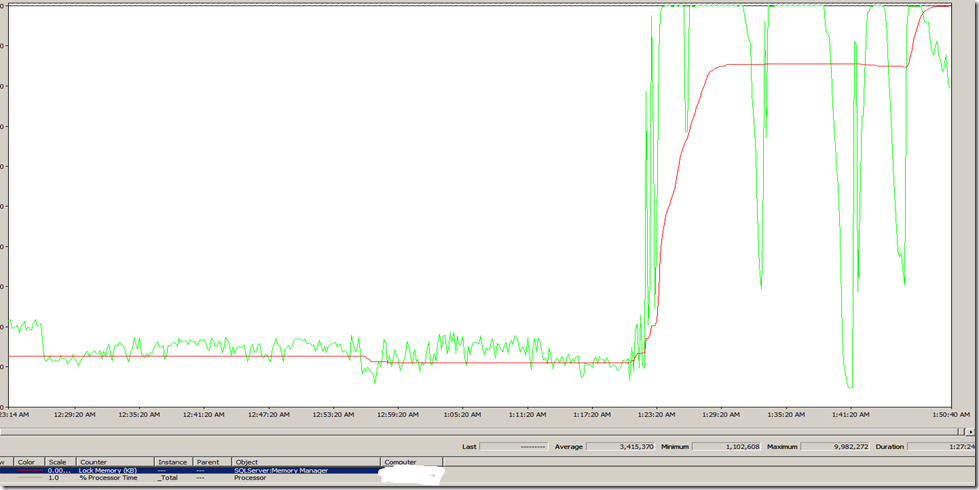 Symptoms of this type of issue

Identification of this type of issue

There are several ways you can identify this issue.